Confused by the title of the blog? Here it is with the vowels included;
brgr – Eating A Burger With Aaron Gillespie from Underoath / The Almost

THE STORY
Eating burgers doesn’t pay the bills (yet!) so I day light in the rock and roll biz as an artist manager. Most of you loyal readers already know but I like to preface. When I recently discovered that Aaron Gillespie from the bands Underoath and The Almost has his own serious food blog, I asked his manager Randy if we could go out on a Burger Conquest together. Aaron is a great guy with 2 kick ass bands and a massive appetite. They both replied with an emphatic yes! We’ve all known each other for years but never in the food capacity, so Jackie and I were damn excited to join them.

As Aaron is a gigantic god of rock, we had to adhere to his very busy press schedule which meant choosing a burger near his record label’s offices in NYC’s Flatiron district. I wanted to pick a spot that none of us had been before. Enter the highly rated brgr. Grass-fed beef is the name of the game here, which is, as brgr says, “higher in Omega-3 Fatty Acids and vitamin E. Our grass-fed beef is also free of artificial hormones, antibiotics and other things that don’t belong in burgers.” Grass-fed beef has a much smaller carbon footprint, so it’s healthier for both you and the Earth. brgr uses fresh produce, hormone, antibiotic and additive-free milk and they make their own sauces from scratch. You can choose from their suggested burger creations or you can build your own. There is of course a 3rd option…both! Being a cake and eat it too type of guy, that’s exactly what I did.

THE BURGER
Aaron and I both ordered the “Blue Sky BRGR” with Roquefort, Bacon, Sweet Onion Marmalade, Lettuce, Tomato and Pickles. They gave us a # and we sat down when only a few moments later, our food arrived. Before I could really get in the obligatory food blogger photos, Aaron had me on camera talking about “The Glorious Pursuit of Delicious Burgers.” While I was trying to sop up the messy, messy burger, Marty, brgr’s operation manager, came over to say hello. The Roquefort was warm, runny and over powering my sandwich. It made it impossible to actually taste the difference that grass-feeding makes in beef . The bacon and Sweet Onion Marmalade flavors were lost in the quicksand of cheese. The last few bites were just one big soggy blur. Thank god for on-table napkin dispensers!

Marty explained the process through which brgr obtains their meat and the cleanliness of the beef. Grain-fed beef makes for bulkier and fatter cows, whereas grass is the natural diet of a cow and brings forth a natural taste in the beef. Then the questions started. “Did you try the sweet potato fries?” “How about the homemade horseradish dip?” “People claim to love our bacon. Did you get a good taste in the Blue Sky brgr?” The answers to all of the above were a sad “no.” Marty, being a man after my own heart, was not going to take “no” as an answer. He and the VERY friendly staff marched out a sampling of each.

After all that, I felt like I had to give brgr another chance so I marched back up to the counter and ordered a brgr with American Cheese and Lettuce, cooked medium-rare on a whole wheat bun. A good bun is essential to a good burger and whole wheat almost always hit the mark. A much better choice this time as I could get take in the actual flavor of the beef. Their flat top griddle delivered me a very greasy burger with a nice pink inside. I could see how most people would be turned off by the gaminess of their beef. We’re used to a salty mix of grain fed beef here in the USofA and to the unfamiliar palette, this could be too different. Me, I liked it. The patty’s flavor is more natural and although still juicy, isn’t as savory. Bottom line, it’s good, go eat one or whole bunch!

When you come to a stop sign, you stop. When you see a sign to yield, you should yield. When you see the sign that says “Signature Blueberry-Pomegranate Shake – Voted Best Milkshake In New York By New York Magazine,” you should get a Signature Blueberry-Pomegranate Shake! Too full? Get it in the 5 oz “Shake Shot” size. The idea of a post burger shake makes me think I will instantly need a pillow and a bed in the corner of the restaurant. Normally, I would skip but in this case, you should not. It’s creamy but not too thick and bursting with delicious milky-fruity flavor.

“brgr is one of those places that makes you feel good, but it still holds this “gimmicky” feel. They are shooting for something between old world grease shack and an organic, grass fed NYC-goers palace. I liked it, not love like. It’s totally fine for lunch, but don’t take your mama”
-Aaron Gillespie, Underoath / The Almost

Foodism Meets Burger Conquest! from I Surrender on Vimeo.

Foodism Meets Burger Conquest! from I Surrender on Vimeo. 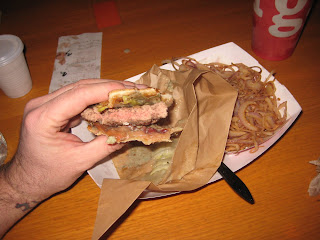 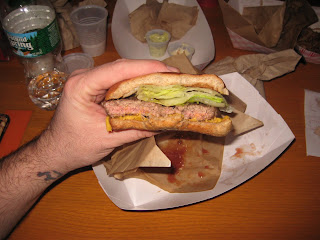 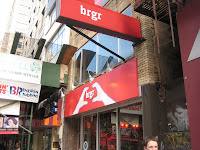 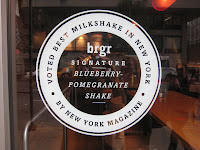 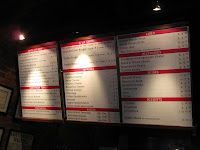 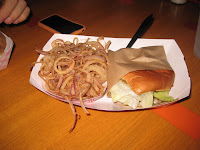 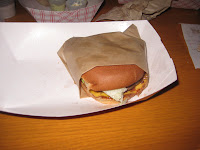 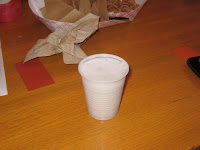 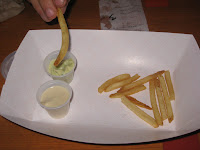 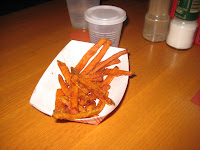 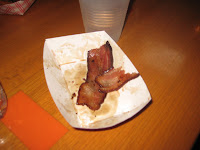 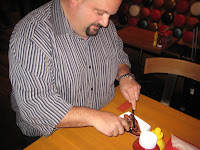 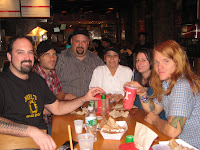 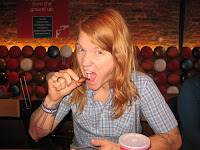