Schnipper’s Quality Kitchen – Getting Stoned With an Idol

THE STORY
When I started Burger Conquest, it was merely with the intention of sharing my love of burgers with my friends and creating a journal of our burger eating exploits. As the posts went and up and my obsession for burgers grew, I learned of a man, some might call him a legend. His name is George Motz (pronounced Moehts) and he is considered the foremost expert on burgers. How did George earn this level of notoriety? As an award-winning Director of Photography, while looking for a new project to film, George decided to make a film documentary about 8 of his favorite places to eat his favorite food, the hamburger.

In 2005 the film “Hamburger America” debuted on the Sundance Channel. Not one to sit still, George combing his 2 passions, then co-created the NYC Food and Film Festival. Shortly thereafter came the book of the same title but this time with 100 different burger joints reviewed within. He’s taught a burger course at NYU and even designed the burger at the NY Water Taxi Beach, appropriately named, the Motz Burger. As burger joints come and go, the book and movie are just not enough to keep the burger community appeased, so George runs a regular blog to keep his fans up to date on his burger adventures. Motz, as most people call him, is the definition of “dedication to a craft.” As far as I’m concerned, he is the Indiana Jones of burgers.

So when Adam Kuban, founder of A Hamburger Today, email introduced me to George, I got kind of giddy. When George suggested we get a burger together, I almost became unhinged. The opportunity to meet the lord of the burger was just too damn excited. He suggested we meet up at Schnipper’s Quality Kitchen. Jackie and I couldn’t wait.

Schnipper’s is the creation of 2 brothers named Andrew and Jonathan Schnipper. You may have heard of them as they were the force behind Hale and Hearty Soups. Selling the company off in 2006 left them ready for new pursuits and to quote them; “soup is good food, but when you get right down to it, nothing really beats a quality burger, right?” After what sounds like an amazing road trip, eating food in all 4 corners of the US, they returned back to New York and opened their Quality Kitchen right across from the Port Authority and next to the New York Times. For those of you not familiar with either building, it’s the same one that 2 people scaled before getting arrested back in 2008. Although the focus is on burgers, SQK also serves all sort of comfort food like mac and cheese, hot dogs, shakes, sloppy joe’s, chicken sandwiches, fish and more. And on this rainy Wednesday, we were about to meet a burger icon inside their restaurant.

THE BURGER
After George arrived and pleasantly greeted us, he approached the the counter and asked if the Schnipper’s were in. They were not so George walked us over to the counter and suggested the Hickory Bacon Blue Burger. George also threw a nod towards the Green Chile Burger but I wanted whatever he was going to get. Along with my burger, I ordered the Southwestern Mac & Cheese with roasted poblanos and green onions. George is bursting with excitement and stories and as we played the get to know me game while waiting for our Schnipper’s buzzers to go off, we were barely able to complete stories without getting side tracked into other stories. The buzzers went off and we all raced over to the counter to grab our vittles.

The Hickory Bacon Blue Burger comes with bacon, blue cheese, crispy onions, hickory BBQ sauce, lettuce, tomato and Schnipper sauce. A veritable cornucopia of toppings if you will. I was mighty shocked to see George order it as many of his reviews in the book beg readers not to over adorn your burger with toppings and he is constantly claiming favorites to burgers that have nothing on them other than a bun or onions. But in this case, burger monkey see, burger monkey do. When I saw George remove the tomato from his burger, much like I always do, I was stoked. I knew were more alike than I had thought.

A bite or two into the burger and a perplexed looked came across George’s face. Mine was tasting pretty good so I was a little weary of what was happening. “They forgot the onions. You gotta have the crispy onions,” George proclaimed right before he got up and walked over to the counter to ask for crispy onions. Just as he made his approach, Andrew Schnipper walked into the restaurant and witnessed what was happening. George returned to the table with the onions.

A few moments later, a VERY apologetic Andrew Schnipper came to our table with 2 new Hickory Bacon Blue Burgers. Not one to waste a great burger, I finished the first one before ripping into the 2nd. The 80/20 chuck blended hand-pattied burger was bursting with greasy juices and cooked absolutely perfectly. The measurement of bacon to cheese to crispy onion to meat to sauce to bun was clearly something the Schnipper’s had spent hours and hours concocting. This was no ordinary burger, this was an American classic gone to the tastefully extreme.

While the magic flavors of my 2nd burger were doing the happy dance in my mouth, Andrew returned with 3 samplings of their new tomato cheddar soup. I don’t like tomato soup but I kind of felt obligated to have a taste. I ATE THE WHOLE THING! It was great, very thick and tasted more like a cheesy Italian pasta sauce then the watery version of tomato soup I am familiar with. As I was putting the finishing touches on the burgers and soup, Andrew returned again with 3 hand-crafted shakes for us to try. The chocolate shake was extremely rich and syrupy, the black and white was decent but not really my bag but the brand new pumpkin spice was from another plane of existence.

While everything we ate was darn-tootin, I am sad to say that the mac & cheese was pretty forgettable. I was hoping for a deeply rich and thick cheese with a nice spicy bite but instead it was watery and the peppers had little to no flavor. Sorry guys, I feel overwhelmed with the desire to ONLY say great things about the place because I loved it, but have to be honest. Everything else though, you need to eat!

Quote of the day goes to Motz. As the meal was coming to an end, George paused, looked up at us and said “I think I’m burger stoned.” 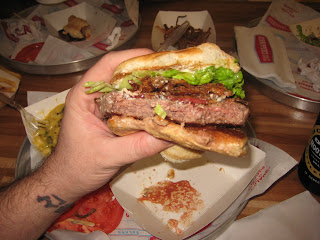 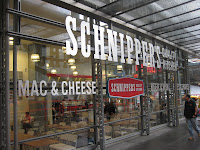 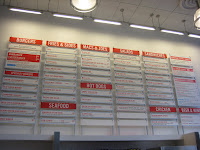 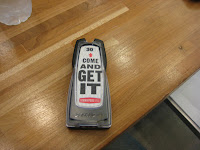 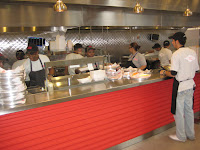 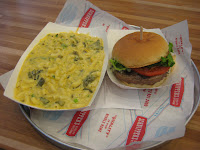 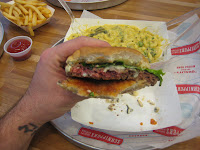 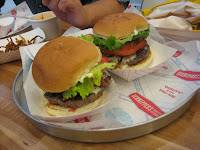 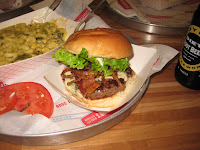 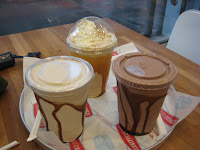 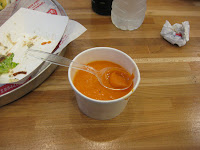 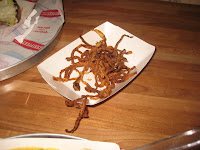 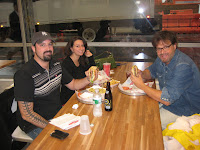 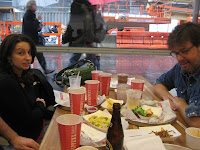 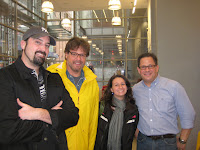