THE STORY
Once a year, the wife and I, along with our friends Derek and Lara meet up in Sandusky, OH to ride roller coasters at Cedar Point. But more on CP in my next post. I’ve been going to the park since I was a wee little snapper. Right before you make the turn onto Cedar Point Causeway there is a Days Inn with a water park, bowling alley, arcade and a restaurant called the “Thirsty Pony.” Ever since I was a tyke, I have been attracted to the allure of this strange suburban playground…but have never been there. On this particular coaster mission we stayed at the hotel across the street and decided to stop in for a bite to eat while we waited for Derek and Lara to arrive.

“FAT BURGERS” If you saw that sign outside of a restaurant, would you not at least look at the menu, if not run in and find a seat as quick as possible? I DID!!! The Pony is a very strange place. It’s brightly lit, connected directly to the bowling alley, has a horse race betting lounge (simulcast), keno on the screens and lots of greasy fried food. It’s some kind of loud, wacky, middle of nowhere, Midwest, blue-collar den of offerings to forget about the world outside. With a Leinenkugel’s Sunset Wheat (one of my faves) in front of me and a page of burgers to choose from, I was ready to indulge. That’s when I came across this..

“The Thirsty Bam Burger: – our signature burger ground with a touch of horse radish and fresh garlic, seasoned with salt, pepper and steak sauce, topped with Swiss and mozzarella cheeses on ciabatta bread.” We ordered it along with some mild hot wings and a side of sweet potato fries.

THE BURGER
While we waited for the grub, we bought in to a few rounds of Keno, none of which we won. The wings were crispy fried but not covered in sauce. It was at the bottom of the bowl and you had to dip them in yourself. The were crispy and greasier than I could possibly enjoy. Also, I want my wings SLATHERED in sauce. I wouldn’t avoid them.

The burger looked damn good. Ciabattas are delicious and this one barely held the massive wad of meat covered in cheese in between. So big in fact, that it took 2 hands to eat the sucker. Making my signature “left hand grab” picture very difficult. After a few bites and a near failed attempt at photographs, the whole sandwich practically disintegrated into a massive pile of slop. As for the taste, all I remember was tasting the steak sauce which beyond any shadow of a doubt was A-1. It was so over powering that I could barely taste the garlic, horseradish and beef…you know the good stuff!! The beef itself wasn’t all that great or flavorful. There was a lot of hype and show here but no real value. What a let down.

HOWEVER, the crispy sweet potato fries were great! They came covered in cinnamon sugar and what I can only describe as cinnamon frosting to dip them in. It’s pure insanity! It’s the kind of thing that mother’s fear children will never think of. Admittedly, I felt a little wrong about it but there was no denying, it was good! Too bad I couldn’t say that for the burger or the wings. 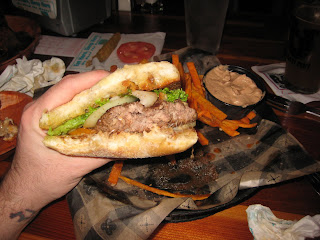 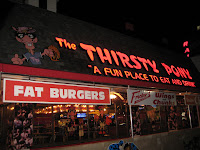 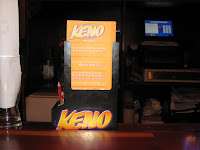 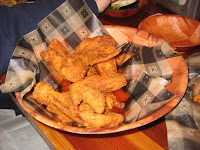 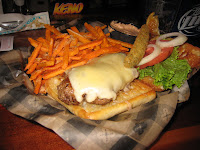 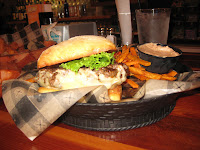 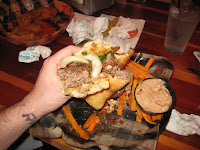