THE STORY
Built in 1913 and originally named Weeghman Park, Wrigley Field opened up as the baseball park that houses the Chicago Cubs in 1916. From 1920-1926 it was called Cubs Park and then renamed after the William Wrigley Jr. known for his chewing gum company. From 1921 until 1971, the Chicago Bears football team shared the stadium with the Cubs. Wrigley Field is the 2nd oldest park in the MLB (Fenway in Boston is the oldest) and the oldest in the National League.

Located downtown in a section called Wrigleyville, it’s a part of the neighborhood and the only park that has roof top seating available on top of surrounding buildings. Local business thrive of the crowd it attracts and even the Taco Bell and McDonald’s next to it are dressed up to match. Bars are named after the team, the players and even their very famous announcer, Harry Caray.

You can see it in the movies “The Blues Brothers,” “The Natural,” “Ferris Bueller’s Day Off,” “Rookie of the Year,” “A League of Their Own” & “The Break-Up.” It’s also been in episodes of many TV shows: “ER,” “Crime Story,” “Chicago Hope,” “Prison Break,” “Perfect Strangers,” “My Boys,” “Family Guy,” “The Simpsons,” and most recently on “The Tonight Show with Conan O’Brien” as he ran through the turn styles on the premier episode of his show from it’s Hollywood location.

You will be hard pressed to find a park more nostalgic and fun than Wrigley. People love this stadium! Wrigley is a unique piece of both America and baseball’s history and there is no other park like it.

In the modern era of parks, food and dining options have gone way beyond hot dogs, peanuts and cracker jacks in an attempt to increase revenue by appealing to food fanatics of all kinds. Jackie, Cara and I were on a mission to find out.

THE BURGER
After a late night and early morning Kuma’s Corner burger, I can’t say I was dying for another, but that is what I do for YOU! The Wrigley Field cheese burger is reminiscent of a fast food chain burger, say more like a Whopper than a Quarter Pounder. It was a little dry but definitely had the salty flavor you want from a burger. I’m sure the American cheese was some standard massed produced grade of cheese but it has a great flavor that adds to the overall savory flavor of the sandwich. Wrigley offers ketchup (yuck), yellow mustard (nice) or spicy mustard (hell yeah!) if you want to top your burger. While this wouldn’t be my food item of choice at the park, it wasn’t bad. 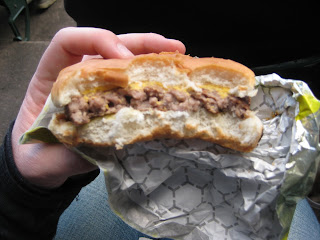 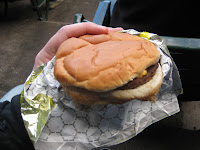 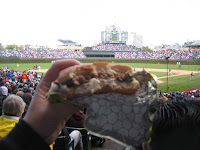 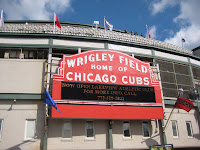 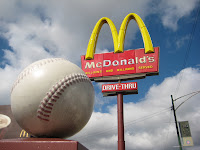 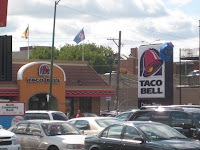 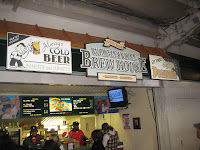 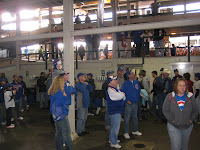 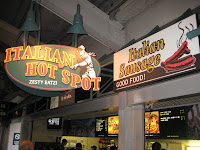 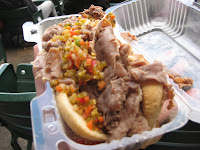 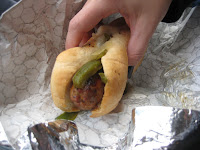 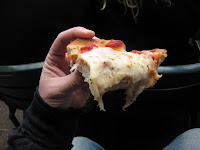 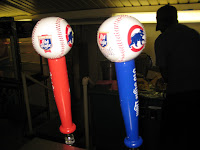 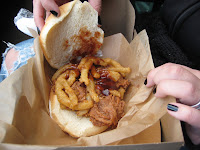 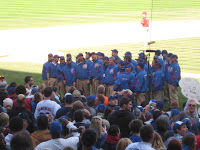 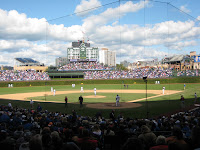 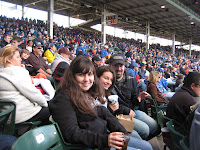