Don’t lie, whether you like it or not, you know every word to the song…

If you have been to a Frat bar, college house party, Florida, wedding, bachelorette party, an ocean oasis, the beach, the “19th hole” or listened to a classic rock or easy listening station, you have heard Jimmy Buffett sing his #1 hit about being drunk on margaritas.

While I can’t say I am a fan of this South Floridian’s “island escapism” style music, you can’t deny the popularity, nor the sentiment of the songs. Drinking, sitting in the sun and eating cheese burgers? This is the life we all yearn to live. Perhaps that is why his greatest hits, “Songs You Know By Heart” was the ONLY CD my father owned.

The story goes like this, Jimmy was out on a boat trip gone bad with only peanut butter to live on. Their boat came ashore on Tortola in the US Virgin Islands. They approached a local bar and ordered a cheeseburger which, as legend goes, was over cooked and served on a burnt bun. But the experience was so good, it inspired the song. Several restaurants lay came to being that burger. Le Select in St. Bart’s, Ma Ruby’s in the Bahamas and the leader in the claims, Stanley’s Welcome Bar in Tortola.

Well somewhere along the lines, the people at OSI Restaurants decided to make these 2 very popular songs into dining establishments, Margaritaville and Cheeseburger in Paradise. Capitalizing on the myth of this magical burger, prepared in a fashion that no self respecting burgerist would enjoy, both of them carry the magical burger named in the song.

While at Universal Studios celebrating my 1 year anniversary my wonderful wife Cara, we worked up a sizable hunger after an afternoon of thrill rides. I suggested we exit the park and check out the food options in Universal City Walk. City Walk is the area that connects the two Universal parks and is filled with food, shopping and clubs. Unfortunately during the day, there aren’t really options for table service dining other than Jimmy Buffett’s Margaritaville. But we wanted to sit, relax and have a drink, so we went in and got a table.

Having been down the path of chain restaurant burgers, my better intuitions told me to avoid getting a burger here. I was about to order a salad, along with my Mai Tai, when I decided to ask our waiter if the burgers were fresh or frozen. When he assured me they were made fresh, I just couldn’t say no. Damn it Dad!

THE BURGER
In attempt to not go totally overboard, I opted for a side salad instead of french fries. The red wine vinaigrette dressing I ordered was garlicky and delicious. I did not regret the decision. But when my Hickory Cheeseburger showed up, it came with fries anyway. So much for healthy options!

With much trepidation, I picked up the sandwich and took a bite. Hmmm. Was my mind fooled? Was I going crazy? Was this a burger as tasty as the song claims? I took another bite and another and another. Cara looked at me and asked “well??? How is it?” I can’t lie to you, this burger is pretty good! They cooked it medium-rare just like I asked. The salty beef patty was juicy, dripping with grease and filled with a fresh salty beef flavor. The Hickory sauce was not unlike that of the beloved Apple Pan in LA, a smoky ketchup /BBQ sauce hybrid. It was really tasty. The sesame seed bun, although a little big on top and a little small on bottom (perhaps just a bad slicing job) was soft and fit the sandwich just right. If you want to get a burger while at Universal Orlando, this is the spot!

I might not like the music but I can’t argue with the man’s sentiments; “Warm beer and bread they said could raise the dead.” 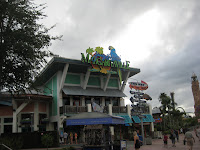 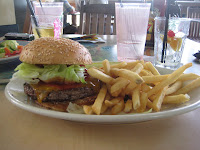 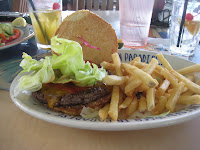 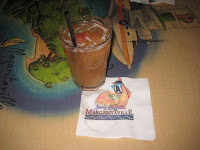 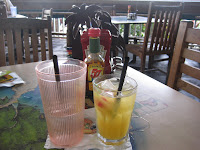 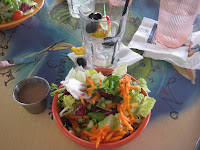