Best Burgers and Shakes – I Can Haz Cheese Burger Delivery

THE STORY
After my discharge from the hospital from an infected cat bite, I needed a day at home to rest and re-charge. More importantly I needed to help nurse and watch over our cat Kc who had suffered his own injuries. While I sat on the couch catching up on some work, I started to get hungry. After spending 4 days eating hospital food, I thought I deserved a treat and so did the cat. To others this may mean a cookie, ice cream, pizza, or tacos, but not me. This means a BURGER!! I grabbed something you’ll find in every New Yorker’s apartment, the menu box and started flipping through my delivery choices.

2 menus in, I landed on Best Burgers and Shakes, a brand new burger joint in my neighborhood of Hell’s Kitchen. With little knowledge of the place, I decided to place an order. It should also be noted that this makes a milestone for Burger Conquest. Our first ever delivery review!

THE BURGER
The Burgers were only $6.50, which is about the same price as a Shake Shack Burger. I always eat 2 when there so using that knowledge, I ordered 2 burgers: 1. just the basics; cheddar cheese, lettuce and onion. 2. American and cheddar cheese, fried egg, bacon, lettuce, onion and Cajun sauce. Both of which were ordered medium rare.

When the order arrived, I couldn’t believe the size of the burgers. Here I was expecting 2 small to average size burgers but these suckers were huge! I thought maybe my percocet induced haze was causing my vision to fail but no, these burgers were made from whopping 8.5 ounce patties. Clearly, I had ordered more than I could chew. Thank god I had a little buddy to help me out.

I started with the basic cheese burger. Served on a soft sesame seed bun, it was moist, juicy and had salty yet slight and oh-so-subtle sweet flavor to the meat. The patty was made in the back yard / old-school pub fashion from ground beef and over cooked. It held together through out the sandwich, including the bun. Halfway through, I moved onto the concoction burger. The produce toppings were fresh and crisp. The 2 cheeses blended together so very nicely. The bacon was crispy and bursting with smokey saltiness. The egg was cooked just right and the yolk oozed all over the place. The Cajun spices were used in such a sparing manner that they merely accented the flavors of the burger rather than overwhelm them.

The fries were awesome! Made from whole sliced potatoes, with the skin still on, they were fried just the right amount. For a delivery burger, the food was great and it came fast and hot. I was really impressed and must go back again for another visit, but this time, directly to the location.

*No animals were harmed in the events that surround this post (other than the ones eaten). Also, no animals were actually fed any of the email. However they may have been taunted and teased for the sake of photo graphical comedy and they may have also been offered some of the cheese from the burger, which they smelled and licked, but did not eat. 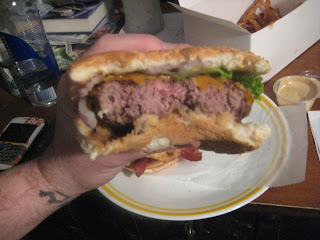 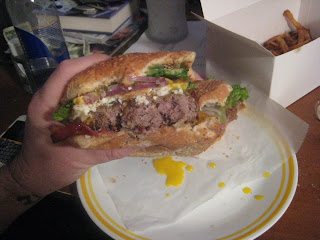 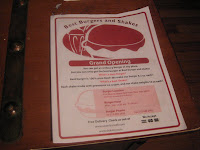 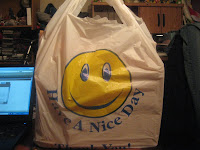 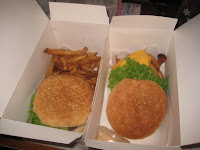 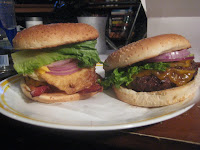 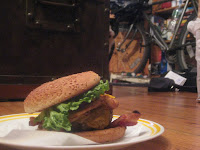