THE CONQUEST
Name me the last time you had a great meal on an airplane. Unless you flew first class, you’re lying and even then, I still might question you. Bad airplane food is so commonplace that the secret committee who polices standup comedy routines have banned it’s use in jokes. (Also banned; jokes about “white people dance like this / black people dance like that,” and “kids say the darndest things.”) But it’s true, airplane meals suck worse than the tiny seats you have to eat them in. To combat such horrible food, I always try to grab a bite before I fly the friendly skies.

Airports, while over priced, can have some decent food options (along with some piss poor ones as well) but you have to know where to look. You’ll also need to be early for your flight which I know a lot of people can’t stand. Not me. I get to the airport 2-3 hours before my flight. That way I get through security without rush and then have time to get something to eat and drink.

When I am in leaving the Los Angeles, CA airport (LAX) from the Continental Airlines Terminal, I have a little tradition. I always stop into the Home Turf Sports Bar and have myself a turkey burger from Ruby’s Diner. You could just go to Ruby’s but I like to have a beer or glass of wine to loosen up my nerves before hopping on the fly-fly and of the 2, only Home Turf offers adult beverages. No need for drinks? Stop in an enjoy the 1940’s themed diner restaurant chain popular in 7 different US states.

THE BURGER
After settling down on a bar stool, opening up the laptop to write a review on In-N-Out, I waved over the bartender. I order the same thing every time; a turkey burger with American cheese, not tomato, french fries and a tall, cold beer. I’m pretty sure the burgers are frozen and pre-made (like you would find at most fast food burger joints) so they come out pretty quickly. The burger is served on a sesame seed roll with lettuce, mayo and although I asked for it without, tomatoes. It’s warm, juicy and filling. It’s also better than any other option in the terminal. By that standard, it’s pretty damn good. If you judge it by the microwaved “charbroil” burger I was later served on my flight, the Ruby’s turkey burger is divine! I ate every bite and nearly every crispy french fry in my basket. It’s a great pre-flight meal and if you’re usually in the same mode as I am at the LAX airport, good for hangovers. 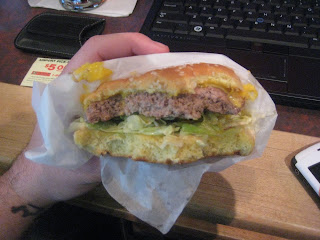 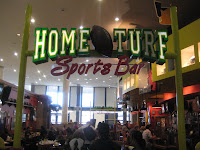 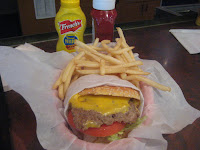