Pie ‘n Burger – A Test Of Time and Patience

THE CONQUEST
They say birds of a feather flock together and nothing could be more the case when it comes to eaters, foodies, gastronomes, gourmands, bon vivants & viveurs. Did you realize there was so many fun ways to say fat, gluttonous, hedonistic and porker? One such friend of mine is Kevin Lyman. You probably know him as the man behind the Vans Warped Tour, Rockstar Enegry Drink Mayhem Festival, the Rockstar Energy Drink Taste of Chaos Festival and most recently, the Country Throwdown Tour. To most he is a mogul of the concert tour business, a philanthropist, a caring father and a loving husband. But to me, Kevin is fellow food enthusiast and we get together to eat, things tend to get a little crazy.

While on a recent business trip to LA, I wanted to stop in and pay Kevin a visit but the trip also doubled as a chance to try out the Pasadena test of time known as Pie ‘n Burger. Located in South Pasadena (along with the 4Fini offices) , this burger institution first opened in 1963. It’s current owner, Michael Osborn grew up eating there and eventually bought the place. Changing very little, including the staff and even the banker, Michael has only added a veggie patty option and a couple of other breakfast menu items. But let’s be honest, even with a decent menu choice, I wanted to eat the name sake, not eggs and fruit.

I asked if could we hit up Pie and Burger for lunch. Kevin agreed but as they are a really busy office, he suggested we order it in. “Oh no!” I thought. Would a traveled Pie ‘n Burger meal be as good as a meal while sat right at the 40+ year old counter? Little to Kevin’s knowledge, I had the solution – A double burger comparison test!! I headed over to Pasadena with some time to spare and pulled myself into the Pie ‘n Burger restaurant. It’s a small place in a quiet neighborhood. The kind of location that locals keep for themselves and allow it to live on in all it’s traditional glory.

THE BURGER – ROUND 1
Trying to keep it to the basics, as I knew I had to eat 2 meals back to back, I went with a Cheese Burger and a slice of pie. The friendly wait staff heavily recommended the banana cream pie as it was the most freshly made. It must’ve been my lucky day as that is my favorite kind of pie! While I sat patiently waiting for the heralded burger of fame to arrive, I sipped on a counter mixed Root Beer.

The time had arrived. The plastic sheet wrapped around the sandwich contained a bun, lettuce, a thick slice of fresh American cheese and the house blend of thousand island dressing. I’m not the biggest fan of the dressing move but it’s a big thing to the West Coasters so like Ron Burgundy says, “When in Rome.” Awwww yeah. This was a good, quality, old school burger. Made from fresh ground beef and prepared with love. These are the burgers and the places that serve them that America was founded on. A true delicious classic that we will never grow tired of. It’s a no frills burger that promises to fulfill now, like it did 30 years ago and will continue to do so in another 30 years. I was expecting it to be a little greasier but it held up well throughout every bite with the wax paper to help maintain it’s structure.

Just as I was flipping the last bite into my mouth, the waitress brought me my pie. MMMMMMMMMMMMM BANANA CREAM PIE!! It was big, not too thick, creamy, fresh and oh, so, freaking good. I might venture to say that the pie made gave the burger some points on my popularity pole. 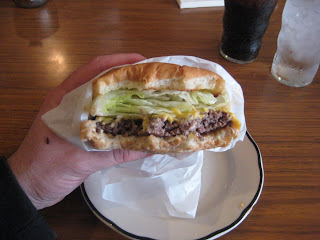 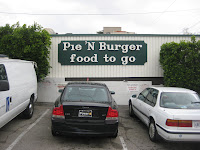 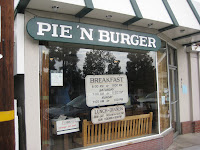 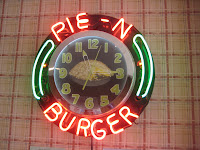 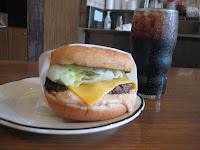 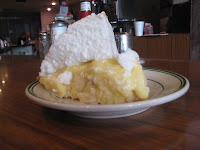 THE BURGER – ROUND 2
I sucked up the last few bites and headed over to Kevin’s office. After a quick “hey-how-are-you-what’s new-check-this-outs,” Kevin suggested we jump in his car and go pick up the burgers. Did I dare to tell him that I had literally just done this or did I quietly sit back and enjoy my own version of the Groundhog Day movie? I opted not to tell him until I actually published the review (Kevin..SURPRISE! I’m fat and I love burgers!!) Kevin and I caught up on the car ride over and when we walked in to pick up our order, I caught a couple of funny and confused looks from patrons and wait staff who had just seen me chomping down at the counter. Was it Deja Vu? Were they witnessing a Doublemint Gum commercial? Were they now in the Groundhog Day movie? I didn’t stick around to find out.

Back at Kevin’s office, it was pure Mayhem (pun intended) as people ran around in a flurry of paperwork, emails, phone calls and hungry visitors looking to find out if the food at Pie and Burger travels well. A few of us were able to sit down and enjoy our food together well others devoured their lunch on the phone. So there it was, the moment of truth. Were the burgers just as good after they had been packed up and transported? Put simply, yes. Sure, it wasn’t quite as hot and steaming as when it comes off the griddle but the wax paper, once again, saves the day, this time acting as a freshness and flavor seal around the burger. Kevin wolfed his down before I was even done taking pictures! He then busted out a slice of cherry pie and said “Rev, you have to try this, its amazing.” With my insides about to burst, I snatched up a fork sized bite and shoved it into my mouth. He was right, it was damn good pie!!

So in the end, here is what we learned from today’s class experiment (in bullet point form.)

Thanks Kevin. Love ya buddy and I will see you on the road this summer. Start thinking now, how are we going top last year’s NY Warped Tour BBQ? 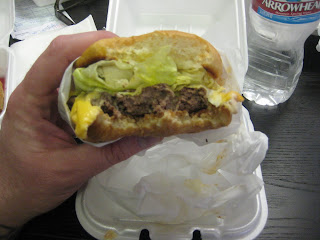 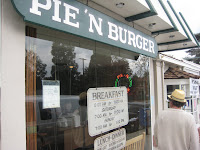 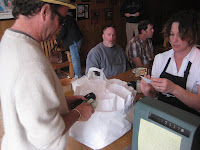 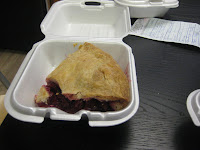 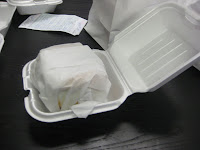 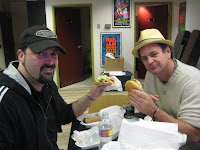