Shake Shack – From Hoth to Endor

THE CONQUEST
With 8 prior Conquests on the site for the Shake Shack…
1. Walk-Thru Only
2. Cure the Common Hangover
3. Welcome to the Hood
4. Upper West Side Morning After Burger
5. The Bloggers Gone Wild Games
6. Guest Blog From the Bacon Jew
7. Shake Shack Citifield – The Wright Stache, Metal Sucks and Genghis Tron join forces with Burger Conquest
8. The Polar Brrrger Club
…I wasn’t really sure if an 9th one was needed. What was I going to do? Tell you again that the meat used was a 25% brisket + 25% chuck + 50% sirloin? Repeat that the place has out door seating only and is notorious for long, long lines of people queuing up to get their hands on the west coast style (ALA In-N-Out Burger) and believe me, it’s well worth it? Describe the taste yet another time while also laying out that 3 available locations by saying, yet again, “The Shack delivers a juicy burger in a soft potato roll with a delicious west coast style sauce. It’s so good and there is no need for any other condiment on these hot little numbers. They’re savory, their oozing with grease and cheese goodness and bursting with flavor. I will say that in comparison, the 2 Manhattan locations are better and my burger was a little over cooked but that didn’t change my feelings, this is an awesome burger.” Or reiterate that the Shack is open rain or shine and that on the snowiest of days, the Shack will not let you down.

Well, I guess just did.

But, on this 9th review, I’m coming with a story. Only 2 weeks ago a MASSIVE blizzard rolled into Manhattan. Many opted to stay home, remain indoors and avoid the cold precipitation. BUT NOT BURGER CONQUEST! We formed the First Ever Polar Brrrger Club, eating burgers in the park during a blizzard wearing only Hawaiian shirts. The food, as always was top notch. It was only matched by the fun of eating in the snow. When we returned to the office we were practically bouncing off the walls with excitement.

Flash forward less than 2 weeks later and my co-worker Jason asked if I would mind taking him for his first Shake Shack experience. We grabbed Josh and Nick and headed over. The weather was so nice that no jackets were needed. The sun was out and the temperature was in the mid 50s. All in all, a beautiful early Spring afternoon in the city. So beautiful in fact, that I really couldn’t believe it was only a few days prior that we were doing the same thing in a blizzard.

So rather than giving you a historical and a review, we’ll give you a side by side look of the Shake Shack from only 2 weeks ago. You won’t believe the difference.

Waiting in line to order:

Waiting at the table for our orders to come up:

The Beauty of Madison Square Park with the Empire State building looming in the back ground.

THE BURGER
Last time a single, this time a double. Twice as much meat and just oh so delicious. While last time I took the opportunity to imbibe a Shackmeister Ale, this time, I went for the Harpoon Celtic Ale as an attempt to start my St. Patty’s Day celebration a week early. The burger, the beer, the good friends, the beautiful weather … only in New York City my friends. 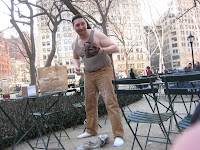 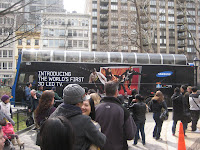 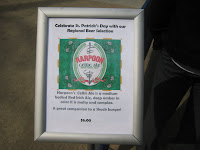 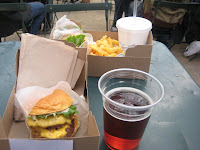 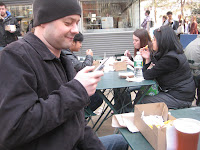 3 Responses to Shake Shack – From Hoth to Endor