Weber Grill – Grilling Is Their Business and Business Is Delicious!

THE CONQUEST
I recently got a new toy – a hand-held ZOOM Q3. It’s like a Flip Cam but has a great condenser microphone on it for picking up high quality audio. It’s pretty rad and I plan on using it for video footage of Burger Conquests. I got it just in time for a little adventure some of my friends and I named the “Metal Road Trip.” This adventure began in Indianapolis where some of my NYC metal brethren and I met up with our burger buddy, Mark. Mark was able to procure us a “bandwagon.” This revolutionary new vehicle has the front end of a small truck with an 8 passenger sleeping capacity, fully-loaded RV on the back. The key is that you do not need anything other than a standard driver’s license to drive it. Here, take a quick tour of what we nick named the “SlayRV”:

The road trip route took us from Indianapolis to Columbus where we attended the Scion Rock Fest and then continued on to Austin, TX for the South By South West Music festival. The road trip ends there but is still going on, even though I jumped off. Follow the adventure on the Metal Road Trip Twitter.

However, before we hopped aboard the “SlayRV,” we took the time to have a Burger at the brand new Weber Grill restaurant in Indianapolis. We all love a good BBQ and we all know that Weber is the king of the outdoor grill. They invented the Weber Charcoal Kettle Grill that we all have come to know and love. To prove their grill-abilities, the Weber company started to open up restaurants where menu items were cooked on a classic Weber Kettle Grill. It’s about this time of year we all get the itch to get in our backyards and start up the grill season. In fact, I recently did just that myself, creating the Bourbon Soaked Bacon Beast, which has a shot of getting onto Bobby Flay’s Grill It! TV show. But I digress…

THE BURGER
Mark, Rich, Nick, Marc and I started off with the best move we could, “The Weber Sampler” (serves two) with a sampling of Rib Fingers, Beer Can Chicken Tenders, Steak Skewers and BBQ Shrimp. Make no mistake, these were all extremely delicious and I highly recommend ordering it. You came to the Weber Grill and you might as well get a great idea of what they are capable of doing. We also ordered an appetizer of the Applewood smoked bacon and that is when the line of the night came out. Our server took a brief pause and replied to our request, “here at the Weber Grill, bacon is ALWAYS free!” You could’ve cut the collective excitement at our table with a pickle spear!!

The burger at the restaurant has received high praise from his beef-all-mightiest, Nick Solares from A Hamburger Today and had my mouth watering before it even arrived a the table. While I ordered the “Wisconsin Burger,” which is served with Applewood Smoked Bacon and Cheddar Cheese, there are other options, including a veggie alternative. It’s all stacked inside an egg based bun which was similar to a brioche. The patty is made from 100% U.S.D.A. Black Angus beef which creates the quality base to built around a tasty sandwich. It was cooked to a picture perfect medium rare, which isn’t quite the easiest thing to do on a charcoal grill. The bacon…OH MAN THE BACON!! With hints of cinnamon and apple flavors, it was just pure pork beauty. The cheddar added to the over all savory appeal of the burger. All it took was one bite to confirm, this burger was incredible but of course, I devoured the whole thing!!!

For the reading challenged, here is the video review;

While I was basking in the afterglow of a beef touchdown, a server appeared at our table, looked at me and asked “we heard it was your birthday!” It indeed was NOT my birthday but having pulled this prank on others, I went with it. “Yes it is and I just celebrated with your amazing burger!” She then placed down in front of me, a slice of cheesecake, perfectly positioned between the same bun that the burger was served on. It was all Marc’s GREAT IDEA and a pretty funny one at that. I picked it up, just like I would a burger and chomped down. It was some DAMN GOOD cheesecake (please note; the Weber Grill does not cook cheesecake on the grill) and much like the entire experience, highly suggested. 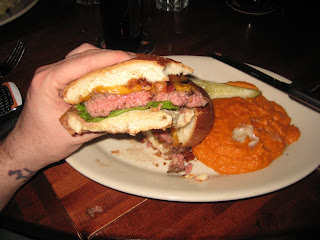 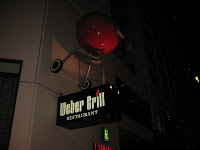 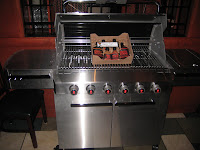 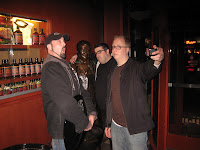 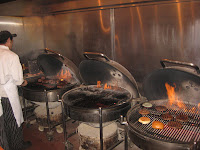 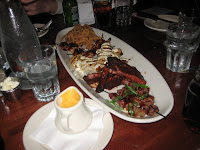 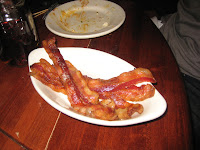 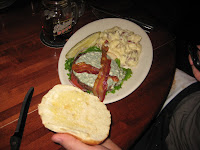 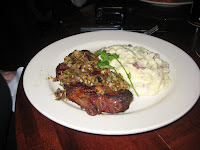 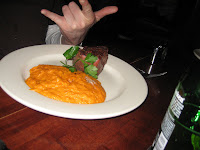 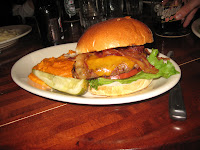 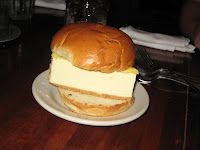 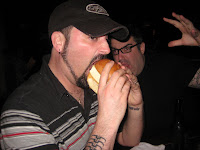 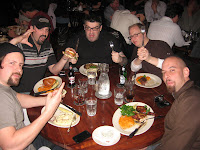 5 Responses to Weber Grill – Grilling Is Their Business and Business Is Delicious!