2nd Ave Deli vs Kat’z Deli Food Wars – Who Eats Pastrami at 8 in the Morning?

THE CONQUEST
Back in early March I got asked to participate in the taping of the new Travel Channel show, Food Wars featuring my good pals in the Grill ‘Em All Burger truck. The episode has yet to air but will very soon. Since the taping, other episodes featuring battles between famous food landmarks all over the US have gone down. Yesterday’s episode finally had the show come here to NYC for a battle of pastrami sandwiches. The war pitted Katz’s Deli against 2nd Ave Deli for the title of best pastrami sandwich in New York.

Katz’s Deli, opened in 1888 and achieved world-wide fame from a scene in featuring Billy Crystal and Meg Ryan in the movie “When Harry Met Sally.” Katz’s is the original and the place that created and defined NY Deli pastrami sandwich. Using a recipe that’s over 121 years old, they dry cure their meat, preparing every single thick-cut slice by hand. The process creates a smokey, juicy, pepper rubbed slice of delicious pastrami.

More than half a decade later, the 2nd Ave Deli popped onto the pastrami scene in 1954 about 12 blocks away in NYC’s Greenwich village. Unaffordable rents caused them to move in 2007 to their current location at 33rd St Street and 3rd avenue. The 2nd Ave Deli serves their specially seasoned pastrami thinly sliced like you would get deli meat for sandwiches. They’re recipe does not call for a pepper rub like Katz’s, choosing to focus more on the natural beef flavors. While the 2 delis are no longer “close” the rivalry is still hot.

While watching the 2 deli’s battle it out for the title, a hunger began to grow deep in my belly. During the broadcast I tweeted “Watching NYC Pastrami battle on @Food_Wars & said to @hellskitten “I would get in a cab right now if you wanted Katz.” I was absolutely serious. Thankfully Cara was able to keep me planted in the house.

But we all know, you can’t keep a hungry man down!!! So, while out on my early morning bike ride (AKA “revrides2010”) I decided to stop by both for a Burger Conquest signature “left hand grab,” “Bike Famous” photo. Katz’s was unfortunately closed at 7:45 AM but 2nd Ave Deli was open. My hunger got the best of me and let curiosity killed the cow. 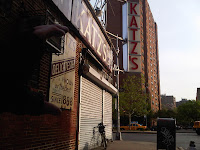 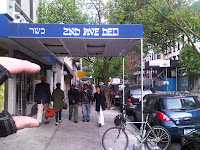 THE PASTRAMI
Let me start by saying, if you want to get a great deli meal without being bothered by anyone else, hit 2nd Ave Deli in the AM. I was the ONLY person in the place, allowing general manager, Steve Cohen to not only wait on me but strike up some friendly conversation.

I had intended to get a pastrami omelet since it was early AM but there was no denying my fave order – 1/2 pastrami sandwich and chicken motzoh ball soup. Moments later Steve returned with a piping hot bowl of soup complete with noodles, carrots, dill and one big honking matzoh ball. The soup came in a metal ladel which Steve poured over the contents right in front of me. With no delay I began to slurp up the overflowing bowl of hot goodness. All the flavors in the soup were very mild but danced nicely around each other so as not to overpower any one particular taste. Without a doubt, some of the best Matzoh soup I’ve ever had in this great city.

Steve asked if I wanted to finish it before he brought out the sandwich. I told him to please not delay…I wanted my pastrami! In less than a New York moment, a large pile of thinly sliced pastrami between 2 slices of fresh rye bread arrived accompanied by a vat of 2nd Ave Deli mustard. As much as I love mustard on my pastrami sandwich, I made sure to try a bite without. The rye was fresh and soft with a sturdy yet not too hard crust. The meat was so thinly sliced that it looked like Irish bacon. One bite revealed a naturally juicy, cured-beef flavor. As much as I tried to go it slow, I plowed through the sandwich in only a few bites. It’s a damn good sandwich well worth it’s weight in channukah gelt.

While I made my way through the food, I had a chance to chitchat with Steve. We talked about the difference in my neighborhood of Hell’s Kitchen now and back in the 60s. We did the same for my hometown of Detroit. Steve inquired about my profession and when I told him I was in the music business, his eyes lit up. “You have to check out this local group Ravens and Chimes. They’re very hard working, handle all of their booking and are quite a good group.” He went as far as to write down the band’s name next to his own on a 2nd Ave Deli business card that he handed to me. Thanks Steve, I did check them out and I dig it. By telling me about them, you just made Ravens and Chimes Burger Famous!

I had never been to 2nd Ave Deli before so this was a first. However, I am a huge fan of Katz’s. It’s a New York staple and one I try to hit a couple of times of year. I pulled out pictures from my last visit this past January 29, 2010 so you could have a side by side photo comparison. Unfortunately the picture quality is not the same as I have since upgraded my blackberry. 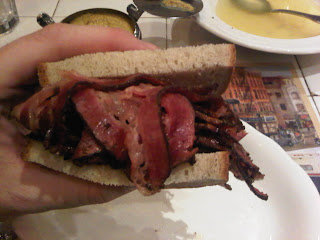 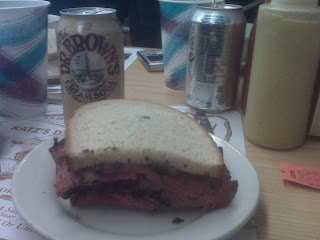 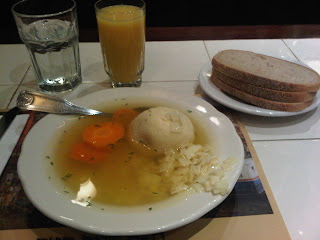 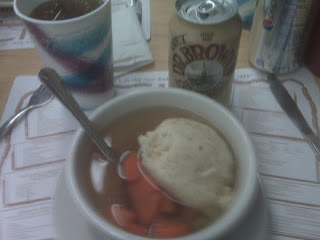 So who has the best pastrami sandwich in New York? They’re both fantastic and worth your staging your own Food War over. You can also tune into the episode of “Food Wars” on the Travel Channel to see which “officially” won. If you’re asking me who I think wins…the answer is ME! 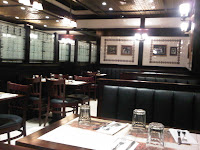 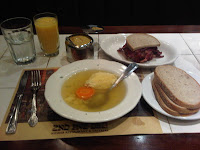 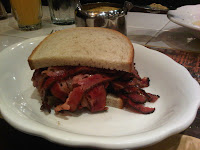