THE CONQUEST
The full potential of the internet has still yet to be reached, however, I may have achieved a new level of dynamic capabilities with the Burger Conquest twitter account. One tweet I recently posted has lead me to belief that Twitter is more powerful than money. Follow me. On April 5th I posted the following in a tweet: “Looking to burger conquest Anaheim @Angels stadium this week. Anyone have a ticketing hook up? Will trade for burgers!” Within a few moments Josh from Old Shoe Records hit me back with a 4 ticket hook up! See the logic? Twitter is free, I posted a request, I got tickets that people would normally pay for, for free! Therefore making Twitter more powerful than money.

Having said that, I treated Josh and some pals to a Burger Conquest party at In-N-Out Burger as a token of my appreciation.

My anticipation for baseball season to begin was at an all time career high. Last season, I chowed down at 7 different stadiums including 5 trips to Yankee’s stadium. Baseball gets it. Foodies like the sport too and are willing to drop coin on tasty treats while enjoying America’s favorite past time. Baseball stadiums, more than any other sport, have really made an effort to offer a wide array of food options for people like me. Do I care about the game? Yeah. Would I care as much if they served the same boring old stadium eats? NOPE…FEED ME. It’s been a long winter and this Yankees fan was anxious to come out of Burger hibernation. When I found out I was heading to Los Angeles for the Revolver Golden Gods awards, I immediately search the Anaheim Angels home schedule. Yes! They were playing the Minnesota Twins the night before the awards show.

Tom, Zach and I, met Josh in the parking lot of the Carls Jr across the street from the stadium, grabbed the tickets and made our way into the stadium. Our buddy Kurt showed up a little later and got me all excited as he instantly demanded churros.

THE DIGESTIONS
After entering and receiving our promotional wool caps, we made a quick b-line to the nearest beer stand. Tom got the first round and also picked up a bag of peanuts. I mean seriously, is there anything more definably baseball then shelling open several handfuls of roasted peanuts while sipping a beer in your seats?!??!? 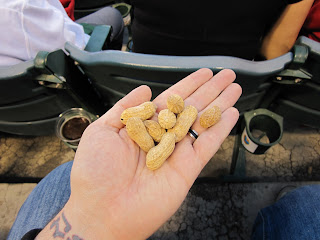 I couldn’t take it anymore and ran out to the front of the stadium and got in line for Clyde Wright’s bar-B-Que. A former left-handed pitcher for the Angels, retired and returned but not to play, he came back to serve Tennessee (his home state) style BBQ to Angel’s fans. While waiting in line I became mesmerized by the man whose sole job it was to stand in a Pope protective style booth and slice meat!! It made me want more than one sandwich. Both ended up being pretty tasty but the brisket was better. Be sure to put some BBQ sauce on the sandwiches as the meat is a little more dry than I prefer. 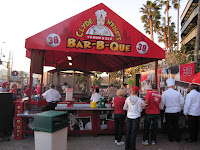 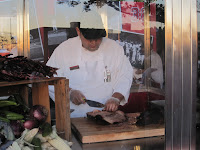 Yeah baby…CHURROS!! If you’ve never had one, you are missing out. Churros are a Spanish pastry made from fried dough. They’re crispy on the outside, soft in the middle and covered in sugar and cinnamon. Thumbs up to Kurt for ordering them and thumbs up on the taste! 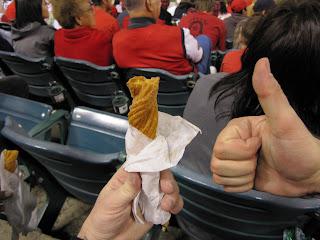 As I was putting the final move on my churro, I looked at the guys and said “I know where I am getting a burger at this game. I pointed to the section of the stadium behind the field and above the waterfall. Located there was a Ruby’s Diner. I would normally save my Ruby’s burger experience for my pre-Continental flight tradition, but this was a special occasion.

As I was getting ready to walk over for a burger, I was distracted by a loud voice. It was yelling “Hot dogs! Get your hot dogs!!” The power of suggestion was too difficult to ignore and I ordered 2. 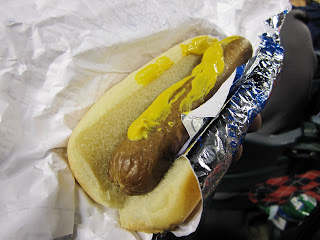 While I fully intended to get a Ruby’s burger, I became even more distracted by something more compelling than beef shaving and hot dog caterwauling…the Anaheim Angel’s Rally Monkey. The Rally Monkey first “jumped” onto the scene in June of 2000 when video crew members were trying to amp the crowd. They showed a clip of a jumping monkey from “Ace Ventura, Pet Detective” and the crowd went crazy. So
on after the Angels hired “Katie” a capuchin monkey from the TV show “Friends” and the Rally Monkey has been a baseball sensation since. We got so engrossed with the Rally Monkey that by the time I realized I forgot to get my Ruby’s burger, the game was over. On the way out of the stadium I bought the Rally Monkey obsessed Zach, his very own souvenir version of Katie.

Now all we need is to get the Rally Monkey to go on a Burger Conquest!!!! 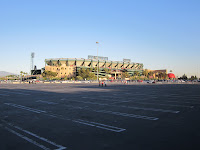 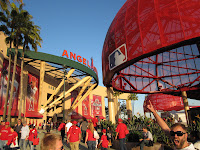 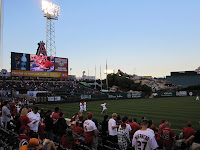 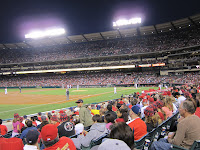 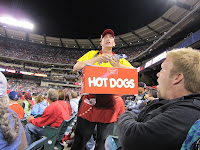 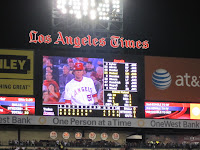 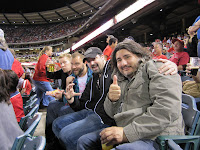 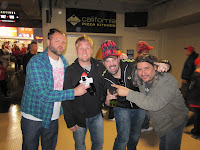