THE CONQUEST
I support my burger habits by working in the music business managing acts and helping bands to offer VIP / enhanced ticketing experiences to their fans. So when the music world and burgers collide, you will find me there. This is my battlefield and I watch over it like a hawk. Enter the Harley-Davidson Dark Custom line of motorcycles. Aimed at a younger consumer and the never ridden before motorcycle curious. I get an email from my friend Susanne who works there inviting me to their Ride to the Revolver Magazine Golden God Awards Parking Lot Pre-Party with the Grill ‘Em All Truck. How could I possibly say no? Moments later, flight, hotel and rental car are booked.

I arrive day of and find the party in a private parking lot in downtown Los Angeles, right across from the Staples Center / Nokia Live. It’s filled with Harleys, riders and one loud truck grilling up tasty burgers. Showing up to the event on your Harley-Davidson motorcycle got you free VIP parking, free burgers and a ticket to the Revolver Golden God Award show. Each rider was placed into a drawing to win a VIP pass and pre-show meet and greet with some of the rock artists attending the show as well. Not bad!

After a brief session of “hey how are yous,” “whats up bro’s?” “so-and-so meet so and-so’s,” and “Hi, my name is Rev. Its nice to meet you’s,” Matt from the Grill ‘Em All Truck introduces me to Barb, his mother. Barb, who was extremely kind and filled with joy, gave me a big hug and thanked me for helping the boys to promote the truck. After a great big “thank you” I asked her, “well have you had the burgers? They’re worth talking about!!” She agreed and that’s when Ryan handed me a “Reign In Bun.”

THE BURGER
So far I’ve mashed my jaw into the Grill ‘Em All “Molly Hatchet,” the “Cancer Bats’ Burger,” and the “Witte,” (click links for reviews / stories) but never the “Reign In Bun.” The name is a pun on the Slayer album “Reign In Blood,” which is highly regarded as one of the most intense and important record in the history of the genre. It would only stand to reason that the burger do the same – 5 pepper relish (its actually 6 pepper now, as Ryan added habenero since the event), pepper jack cheese & lemon pepper creme fraiche served on a fresh roll.

I’ve yet to have a burger from the truck that didn’t blow me away but this one blew me to the moon!!! The heat from the pepper relish and cheese, took resting comfort in the creamy, salty, sourness of the fraiche. Fraiche is an interesting using of cream as it will not curdle, which makes using it in a hot (temperature) and spicy sandwich a great choice. But where the lemon pepper cream fraiche really comes into play is cooling down the pepper relish as it does a hot little dance across your tongue. Slap that around a fresh grilled patty of high quality beef, slid between a fresh roll that is soft in the middle yet strong enough to hold together throughout the messiness of a Grill ‘Em All Burger and you have a sandwich worthy of an award.

It’s not like there is a bad choice on the Grill ‘Em All Truck menu but the “Reign In Bun” is the reigning champ! With words so strong, I convinced Susanne to try one herself and she loved it. (Both of our burgers were dedicated to the mighty White Balance.) After polishing off a burger, Susanne wiped her hands, fingers, face and any other body parts that were susceptible to the damage and prepared for the giveaway. Pulling names out of a helmet, 20 riders got VIP passes to the Golden Gods. Once they were handed out, Susanne and I made our way over to the black carpet. 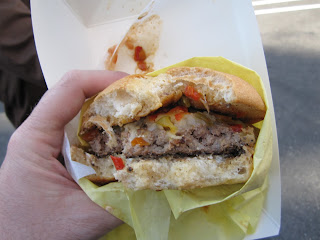 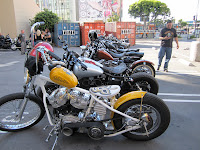 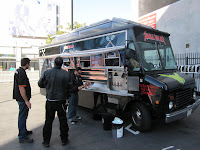 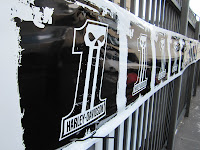 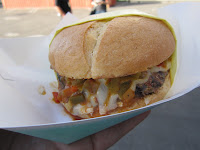 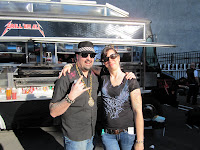 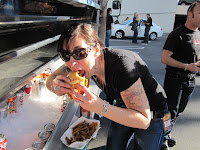 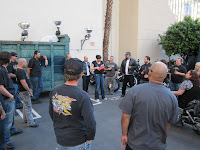 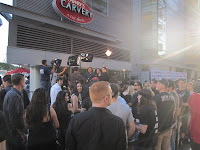 THE AWARD SHOW
I attached my VIP laminate to my BK Gold Ice and made my way into the venue. The show went off with performances from “Slash, Lemmy Kilmister and Dave Grohl, who joined together to perform the Motörhead classic “Ace of Spades”; Slash, who also teamed with special guests Lemmy, Andrew Stockdale of Wolfmother and Myles Kennedy of Alter Bridge; Black Label Society leader Zakk Wylde, who performed a metal version of the National Anthem alongside United States Marines; Rob Zombie in his first show with new touring drummer Joey Jordison; Fear Factory, in their first LA appearance with their new lineup; As I Lay Dying; the Devil Wears Prada; and Brian Posehn’s all-star band featuring Scott Ian, Brendon Small of Dethklok and TV’s “Metalocalypse”, Brett Anderson, John Tempesta, formerly of White Zombie, and Joey Vera of Armored Saint.” 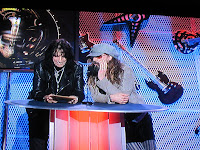 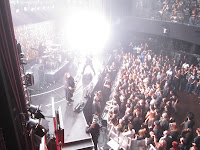 I spent most of my time milling around the VIP area, catching up with old friends, drinking beers and watching the show from the balcony. I watched almost all of Fear Factory’s amazing set and was just blown away by their blazing performance. As luck would have it, I had Burger Famous moments while hanging out and partying.

Burger Famous Moment #1:
While chatting with Matt and Ryan from Grill ‘Em All Truck, Rich Ward, the stupendous guitarist from Fozzy, came over with hugs and salutations. Rich, not only having amazing guitar playing and song writing skills, is a red meat fanatic and one helluva nice guy. 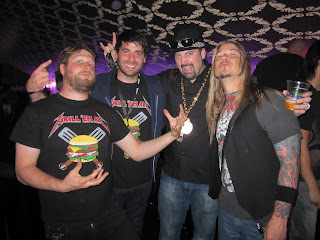 Burger Famous Moment #2:
While I’m chatting with my good pal Maria she asks if I would like to meet Alice Cooper. I almost jumped outta my shoes with excitement. Maria walked me over to Mr. Cooper and said “Alice, this is one of my good friends Rev. He is a HUGE fan and wanted to say hello.” “Nice to meet you” he said as he stuck his hand out for a handshake. “Nice to meet you Mr. Cooper. I am a fellow Detroit boy.” “Ahhhh. How great is our hometown?” Then he pointed to my BK Gold Ice and said “that’s funny. Do you like burgers?” And that right there was where the conversation took a turn…

“Yeah. I write a burger blog for fun,” I replied. “Oh man I love burgers! You know who makes one of my favorites? WHITE CASTLE! I love White Castle,” proclaimed Alice. I couldn’t believe Alice Cooper and I were talking about burgers!!!!! I expressed a mutual love for the WC and asked Alice if he had ever eaten at Brays Hamburgers (a small “belly busting” burger chain in lower Michigan.) “Yes! Brays is great” said Alice and the conversation about burgers went on for another 10 minutes or so. 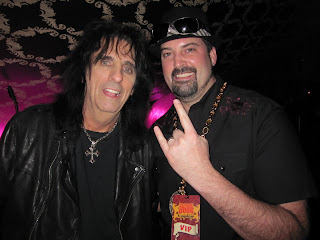 Burger Famous Moment #3:
I was celebrating the event over a beer with Ryan, Matt from the Grill ‘Em All Truck, along with Matt’s Mom Barb. A good time and a good laugh was being had when someone came up to Ryan and Matt and asked “Are you the Grill ‘Em All guys? I’ve been dying to try your burger!” He didn’t need to introduce himself, it was Dave Grohl from the Foo Fighters!! “Mr. Grohl, I write a burger blog on the side. Would you mind taking a picture with all of us?” I politely asked. “Hell No! Let’s do it!” 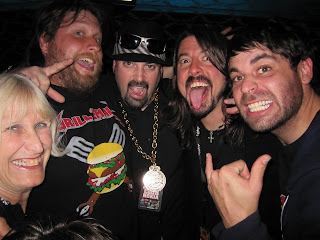 The rest of the night was spent seeing bands, watching award presentations and playing metal high school reunion with the rest of my brothers and sisters in the metal music business. Be sure to pick up the new issue of Revolver on May 11th for pictures and the magazines recap. Also be sure tune into VH1 Classic on Saturday, May 22 to see the final show. Until then here are the list of winners followed by several pictures of some of my knucklehead colleagues. 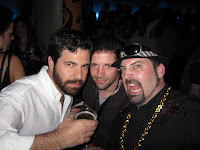 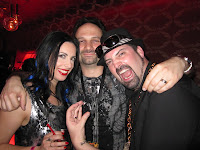 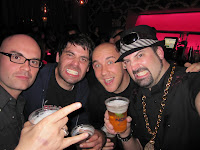 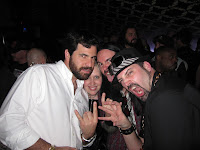 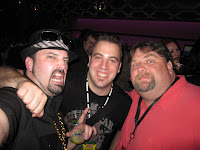 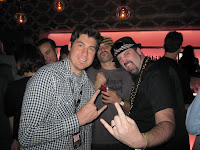 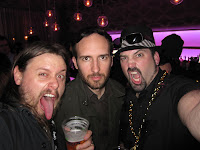 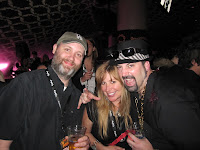 Special thanks goes to Anthony and every at Revolver / Future, Susanne from Harley, Matt, Ryan and Barb from Grill ‘Em All, Maria, Keri Lee, Austin and anyone who bought me a drink or kept me out of trouble!