25 Degrees – The Fight Club of Burgers

THE CONQUEST
Tyler Durden and I have 2 things in common. The first of which is my power to inspire others. All it takes is one small spark to start a fire and that’s exactly what Burger Conquest was for the B.E.U. Short for “Beef Eaters United,” the B.E.U. is made of my burger eating pals, Ryan, Stick and Cheapshot. Their mission is to plunder through the land of Angels, eating every burger in site while maintaining the highest of standards in selection and consumption. *It only took a few posts on this site for them to want to start their own LA-based, rogue Burger Conquest. Thankfully, they aren’t looking to rival or declare mutiny, so when I was last in LA, they were happy to join me for a burger.

With so many great burger choices in LA, it was hard to narrow down to just one but with all the great talk around 25 Degrees, we agreed to lock in. Unfortunately Cheapshot was not able to attend the feast but we were joined by my friends Daryl, Austin and Mat. 25 Degrees is the gourmet burger shoppe on the street level of the swanky, party-goer favorite, Hollywood Roosevelt Hotel. If you know your Hollywood landmarks, it’s right across the street from the famous Grauman’s Chinese Theater. You can also find a 25 Degrees in Huntington Beach, CA, Phoenix, AZ and coming soon, The American Airlines Terminal LAX Airport (why can’t i be in the Continental Terminal!?!?)

25 Degrees is, thankfully, open 24 hours a day to fulfill all your burger craving needs. You can enter through the hotel or directly from Hollywood Boulevard. The self proclaimed “Moulin Rouge style diner” is designed to feel like a Bordello in old Hollywood with counter service and few very large leather booths. Not feeling a burger, first of all what’s wrong with you? then you can order from the breakfast menu. While 25 Degrees has several burger (and omelets) suggestions, you can also design your own. Choose from 3 different kinds of patties, more than 3 dozen cheeses, sauces and sides to fit your taste bud needs. If you’re a wine drinker, you’re in luck as 25 Degrees has small but decent wine list. Beer drinkers, not so much. A couple of standards but no worry, get the specially made 25 Degrees Red Ale. It’s on tap, made fresh and tastes great…kind of like the burger…

THE BURGER
A burger bud recommended I get the house special known as the “number one.” It’s a burger served with caramelized onions, prelibato gorgonzola crescenza, bacon, arugula & thousand island. Sounds pretty good but after a few saucy cocktails at the poolside bar, I was ready to get naughty with the burger menu. With so many options, it’s easy to go over board and pile up the toppings. Doing so, you run the risk of overpowering the beef flavors and there for taint the taste experience. After some careful taste calculations in my head I ordered a sirloin burger with jalapeno bacon, red hawk cheese, green chilis and fried egg. That’s a whole lot of savory flavors but I was pretty sure it was going to pay off.

Winner, winner, burger dinner!! My creation was DELICIOUS! The salty egg and bacon mixed with the spice and heat from from the chilis and jalapeno bacon while the creamy red hawk provided a mild cooling blanket to cradle the tastes. The patty was thick enough to bring a real dominance to the over all sandwich. It was fresh, juicy, cooked to a perfect medium-rare and made my mouth very, very, very happy. Not only was this burger a winner but so was I…as Stick opted for the safety in ordering the “number one” and I got to play the halfsies game with him.

If you aren’t adventurous with food choices or do not have the mad genius flavor genes, this is a choice you won’t regret!! 25 Degrees knew exactly what they were doing when they assembled this burger. I wouldn’t have chosen it over my magnum opus burger but I was very excited to be able to try more than one burger. It cemented it what I was thinking all along, this is one of the best burgers in the LA / Hollywood area. Don’t skimp out on the sides either! The fries, onion rings and sweet potato fries were all top notch and well worth sharing. Much like Fight Club, 25 Degrees awards individual thought and dedication to a cause with a path to burger enlightenment.

I almost forgot! What’s the other thing I have in common with the master of Fight Club?
2. *Many of the things that come out of my mouth are made up, embellished or in the very least, seen in their own unique light. Thanks to the B.E.U. for having us join in their bun…I mean fun. 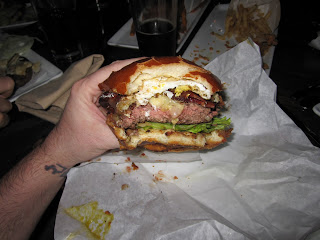 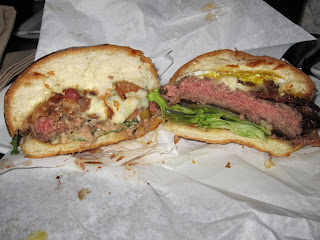 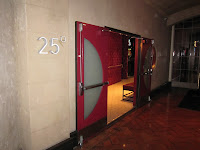 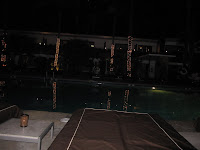 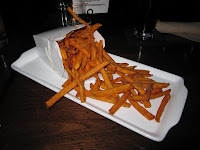 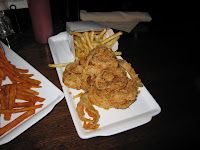 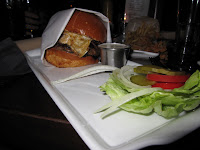 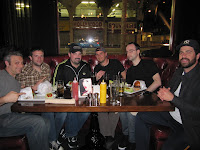 4 Responses to 25 Degrees – The Fight Club of Burgers