The Counter – Idioms From the Idiot

THE CONQUEST
I’m a cheesy guy. I like bad jokes and I make a lot of puns. Much like Ron Burgundy and the famous “when in Rome” quote, I also love to misuse and abuse cliches . Combine the two and you have a joke I that will have me “laughing all the way to the giggle bank.” I’m still chuckling over my 2nd chance visit, “If At First You Don’t Succeed, Fry, Fry Again” to the most over-hyped burger in New York City, the Corner Bistro. So with a return visit to The Counter in LA, I found the perfect opportunity to take another “punny liberty”… “One Good Burger Deserves Another.”

The Counter is a rapidly growing burger chain based in Santa Monica, CA. On my original visit, I hit the Marina del Rey location. With time to kill after a meeting ended early, I realized I was in the vicinity of the original Santa Monica location. I sparked up the GPS and headed over. Once in the restaurant, just for the sake of being meta, pulled myself up to a counter seat at The Counter. To combat the difficulty of choosing from 312,120 possible burger combination’s, I started myself off with a tasty beer and began to get my mad burger scientist on.

THE BURGER
While I would normally think “It’s better to have one safe way than a hundred you can’t choose from,” I was not about to be burger bested. Especially since on my last visit to The Counter I went “all over the map” with toppings. With this burger I planned to “build a better meat trap so the taste world will could beat a path to my door.” I took a breath, remembered that “slow and steady wins the race” and began to customize my sandwich without just “grasping at onion straws.

I finally “circled in” on a turkey burger with grilled onions, fried egg, sliced pepperoncinis, chipotle aioli and horseradish cheese on a honey wheat bun. It looked so good that I didn’t know whether to eat it or frame it, so I did both, in the opposite order. One bite confirmed that “cooler heads prevail” and my combination was a winner. The sweetness of the bun made for an amazing pillow around the milder turkey burger. This gave the spiciness of the horseradish cheese and the pepperoncinis and the smokiness of the aioli to “stretch our their proverbial sandwich wings.” The grilled sweet and peppery onions along with the salty egg helped to round out this “well oiled machine” of a burger. The tasty burger didn’t last too long and I was reminded “time flies when your having food between a bun.” 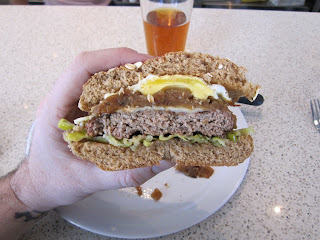 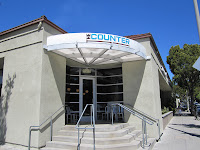 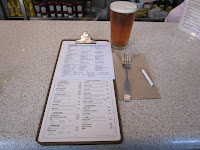 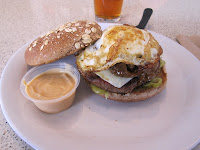 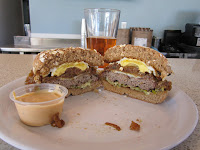 1 Response to The Counter – Idioms From the Idiot