THE CONQUEST
When the weather starts to get warm, I get on my bicycle and ride. It’s one of my favorite pastimes, great exercise and an amazing way to explore your town, especially when your town is NYC. A couple weeks back I sent out an email to my “bike gang” asking if anyone wanted to organize a big Saturday afternoon ride. A few moments later I get the following reply from my buddy Leo (the only other person besides me who uses their @burgerconquest.com email address); “I’m grabbing Bram and going to Philly Saturday for Easter Cheesesteaks at Jim’s. Yes, just in case you might ask, I have an open seat if you want it. hahaha” Say no more! The bike ride was called off and an 11 am pickup is scheduled at my apartment for Saturday morning

Excited and hungry, my wife Cara and I walk outside our apartment to find this… 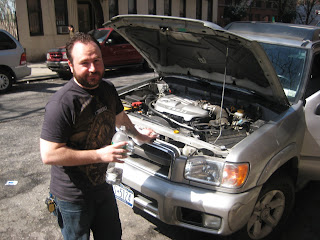 …never a great start to a road trip! A couple liters in the cooling tank, a brief stop to pick up Bram and the 4 of us are on the highway, Philadelphia bound. Somehow I talked the 3 of them into not only getting a cheese steak but doubling up with a Burger Conquest. I guess everyone loves their beef. First stop, Jim’s Steaks on South Street.

A. Rumor has it the guy behind some other cheese steak spot invented the sandwich but the truth is that Jim’s perfected them. I don’t care what anyone else has to say, they’re wrong and if they want to spend their life being wrong, fine with me. I’m happy believing in the truth. It says it right on the front of their website – “Jim’s Steaks has been serving the finest quality steaks and hoagies in Philadelphia for 70 years” and we all know the Internet doesn’t lie right!??!? Must be, because people (us) come from all over the world (NYC) and wait for hours in long, long lines just to eat Jim’s magnificent cheese steak. 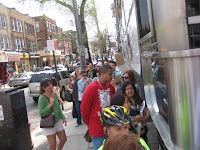 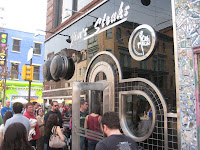 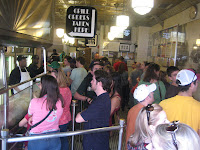 B. Before there was Burger Conquest, there was Steak Club 7. Predating that, I started the NYC Wing-Off but in between I started my first food blog, cheesesteaks.ning.com. When I quickly learned the lesson above in point A. I realized it was time to move on to other food items for blogging subjects.

THE STEAK
A man by the name of “Humble” once took down 13 Jim’s Steaks in one hour. I once took down 2, that’s 24″ of cheese steak if you’re doing the math, and I tell you, I have never felt such intense pain. It was a “misteak,” pun intended. With the impending cheese burger to follow said cheese steak, Cara and I opted to split just one single cheese steak, wit fried onions and extra whiz. That’s the best way to have one and the only way I will ever order. Know your order before you get to the front of the line or face public consequence. The grill man is busy and the 100 or so people in line behind you want their cheese steak! He’ll serve it to you on a fresh Amoroso roll, the best in Philly. Wash it down with a tasty beverage but I suggest an Arctic Splash Iced tea or a nice cold Yuengling Lager. Take your steak to go or to the upstairs dining room and enjoy to the fullest. We opted for the latter as Leo’s friends Matt and Sylvia joined us for the tasty eats. 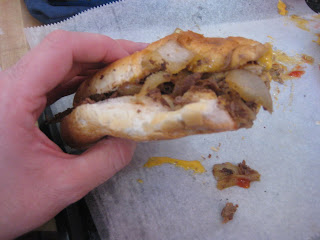 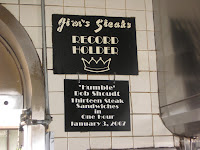 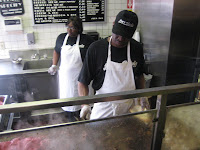 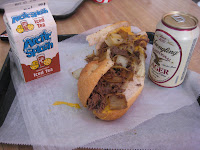 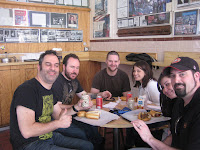 With our bellies full of Philadelphia’s best, our regional native, Bram, took us on a walking tour of Philadelphia. We walked to the end of South Street, overlooking the Delaware river and taking a moment to enjoy the “beauty” of Camden, NJ just across the water. From there we walked back into town making several stops at landmarks that helped to define our country as it stands today. We reflected in front of Independence Hall. Got our photo with the Liberty Bell. Strolled across Independence Mall State Park. Stood in awe of the amazing power of good smelling breath at the Untied States Mint. From there, we made our way into the National Constitution Center where we learned a very important lesson: Freedom, my friends, is not so “free.” In fact, we learned the actual cost of “Freedom” and it’s $12. Well, that’s at least what they charge you to see the US Constitution. We decided to exercise our freedom on other pursuits (namely burgers), said good bye to our very welcoming pal, Ben Franklin and headed to the Northern Liberties. 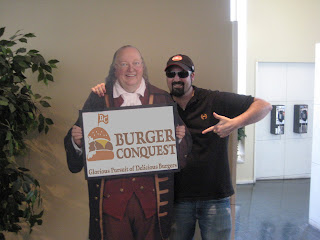 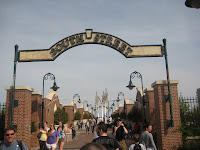 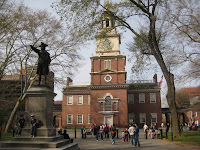 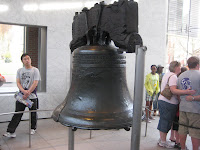 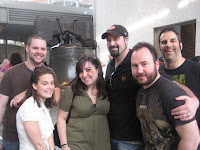 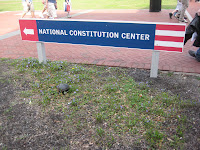 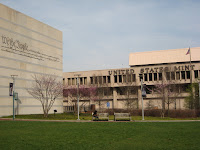 THE CONQUEST
Located in Philadelphia’s BOOMING Northern Liberties section, PYT was built in the courtyard of an apartment building that used to the be the home to Schmidt’s Brewery. Driving by you would never know as the courtyard is located inside the triangle formed by the 3 buildings now named The Piazza at Schmidt’s. The courtyard serves as a meeting place for residents of the buildings complete with a giant flat screen TV and performance stage. The ground floor of each building holds various pubs, restaurants, lounges and coffee shops. While I’m certainly not planning a move to Philly anytime soon, this is definitely where I would want to live if I did!!

We put our name on the list at PYT and walked past the court side seating to the bar inside and ordered a couple of drinks. PYT prides themselves on serving a fine selection of Pennsylvania brewed beers and we sampled the menu accordingly. Eventually, owner Tommy Up rolled over to say hello. Looking a South Philly thug on an Island vacation, Tommy sat with us, talked up the menu, made us laugh, gave us the history and made appropriate beer selections.

THE BURGERS
Tommy Up ain’t no fool and he knows we work hard to earn our money. So why waste that loot pile on substandard burgers? At PYT, that’s not a worry as Tommy and crew use only the freshest and highest quality of ingredients to make their extremely far-from-ordinary menu of selections. The special of the day was a Cheese Steak Pretzel Roll Burger made with a 5 ounce patty and topped with cheddar cheese, in-house sliced Philadelphia cheese steak, Cheese Whiz and the PYT special sauce. How in the hell I resisted the urge to order it will always remain a mystery even though the temptation was mighty high. Probably because I wanted to try everything and 2 of the others had already ordered them.

Instead, as suggested by Mr. Up, I ordered the “BBQ Blue Cheese Burger.” It starts with a 7 ounce, fresh ground patty and then is covered with Apple Wood Smoked Bacon, Blue Cheese, Thin cut Onion Rings and PYT’s home made BBQ sauce. All of that gets slapped into a big ole sesame seed bun and served up for your pleasure.

The burger was absolutely stupendous (much like everything we ordered) and although I liked mine the best, they were all quite tasty. While I did like the taste, I thought the BBQ sauce was unnecessary overkill on my burger. Some may disagree but I like to make sure the beef shines through. As for the cheese steak burger, it was pretty fantastic but as a fan of Jim’s cheese steak, I prefer mine chopped. PYT serves theirs sliced. Call me a nit pick, I like what I like. Either way, you aren’t going to upset with either burger.

Be sure to order the hand cut fries as your side as they are phenomenal. Missing out on them is a huge blunder. To be fair, the onion rings were pretty righteous as well, so split an order with friends. The PYT standard menu has a limited number of choice but Tommy Up and his mad burger scientist militia are coming up with new specials daily. Confused, if you aren’t, you will be so just ask for suggestions from the extremely friendly and helpful staff. 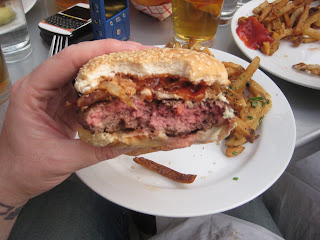 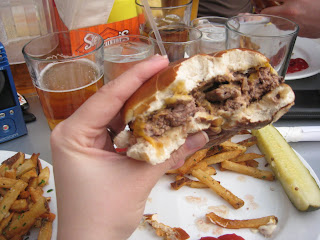 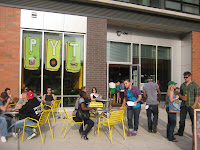 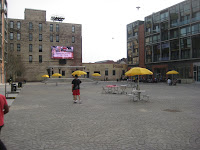 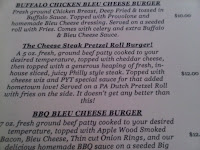 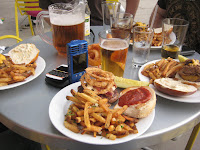 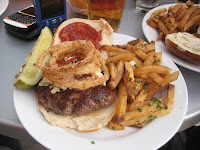 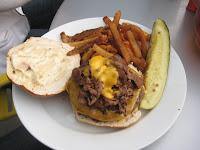 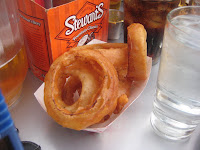 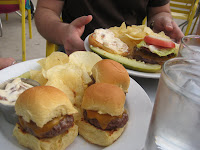 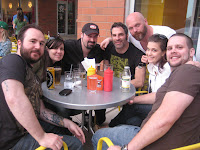