THE CONQUEST
There are 365 days in a year but one of my favorites is the first Sunday in May. Here in New York, for some that means attending The Bamboozle. For me and my friends, it’s the TD Bank Five Boro Bike Tour presented by Bike New York. Now in it’s 33rd year, it’s a whopping 42 mile bicycle ride that takes registrants through all 5 New York City Boroughs.

The ride begins in the Financial District where it heads North on 6th Avenue passing through Central Park into Harlem. The path then heads East in The Bronx and back into the city for a unique moment that allows riders to cruise down the FDR highway with no vehicular traffic. From there it crossed into Queens via the Queensboro bridge, looping through Astoria Park before heading South into Brooklyn. Once riders pass over the Pulaski Bridge, they move along the waterfront passing under all 3 bridges that connect Manhattan to the borough. After cruising by the Brooklyn Bridge, the path leads onto the Brooklyn-Queens Expressway (the “BQE”) which is closed to non-cycling traffic on the day of the ride. That’s probably the least fun part of the ride due to the hills and hot pavement but the pay off is incredible! From there riders hop onto the Belt Parkway, riding along the water with amazing views of the river. This leads into the crown jewel of the ride, the Verrazano-Narrows Bridge, or as my friend Bram calls it “the final boss.” The ride “ends” in Fort Wadsworth on Staten Island with a huge festival. I put ends in quotes because unless you have a car in the parking lot, you have to ride another 4 miles to get the Staten Island Ferry back to NYC. For more info on the route click here.

It seems pretty daunting if you’ve never done it and the first time is always very tiring. No one I know, including myself, isn’t excited, honored and ready to it again once they finish the ride. People of all (or no) athletic ability can participate in the rate and in fact it’s pretty common to see entire families riding it out. It’s the only day of the year where bikers own the city and the only time that the Verrazano-Narrows Bridge can be crossed via bicycle. Several sponsors help to make it a pleasant, easy and fun ride with several rest stops where riders are given food, water and sometimes energy beverages. It is a rain or shine event so you best be prepared for whatever the weather condition may be. Heavy rains do not stop the ride, but they can definitely ruin it! Here is a picture of our defeated crew from the 2009 ride. 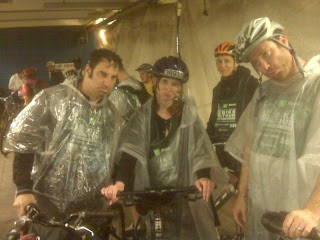 Regardless, it’s a terrific way to spend a Sunday and see parts of New York you would never see otherwise and certainly not in this fashion. I could not endorse this wonderful event more!

You’re probably wondering “Rev! What the hell does this have to do with burgers!??!” Not one to pass up an opportunity for shameless self promotion, I saw the ride as an opportunity to promote the site. Using a dowel rod, zip ties, duct tape, a folder and a marker, I fashioned together a Burger Conquest flag and fixed it to the back of the bike. The flag had by Twitter screen name, the blog’s URL and my chosen ride hash tag of choice “#5Boro.” At the rest stop in The Bronx I met Noel “noneck” who applauded the hash tag. Several riders along the route asked me about the site but more importantly, asked me if I had eaten any burgers yet that day. The answer was “no” until about the 17 mile mark when the ride passed by a White Castle in Astoria, Queens… 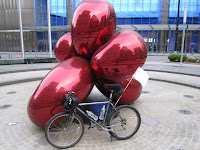 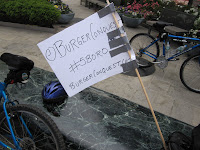 THE BURGER
For slower riders, the Five Boro has a cut off / short cut that happens as soon as you cross the Queensboro bridge. The route skips the Astoria Park section of the ride to help things move along. Even though we were in jeopardy of being removed from the ride due to the route closing, Rob, Bram and I decided to stop off for 1 slider each. While Nona and Janet watched the bikes, we ran inside to place our orders. Of course the place was packed with other riders relishing in the same idea and or taking a potty break. With only moments to spare we slid the sliders down our throats and hopped back on the bikes to rejoin the ride.

The burger was hot, juicy and fresh off, coming right off the steamer only moments before I ate it. While most people might think that kind of ingestion in the middle of demanding physical event would prove debilitating, I proudly admit that I had my best performance of the ride in the following 8 miles! It was a delicious source of energy and fuel for the rest of the ride! 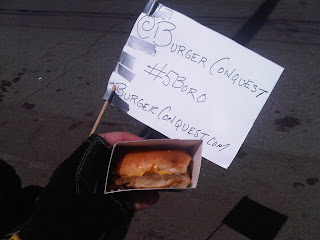 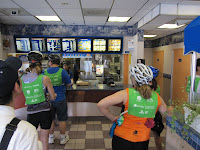 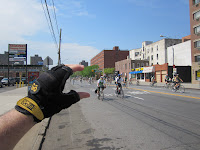 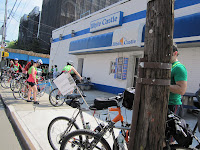 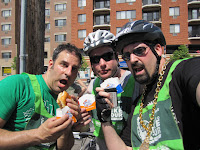 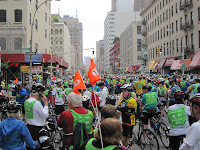 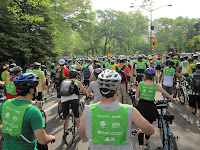 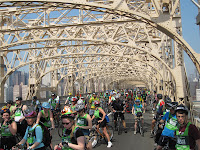 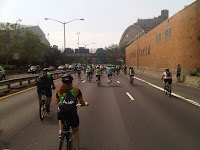 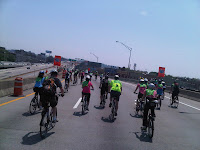 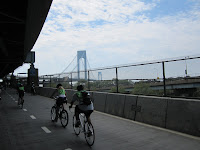 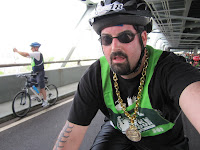 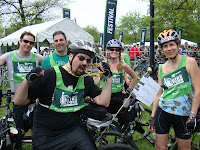 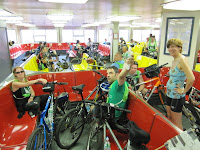 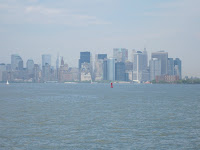 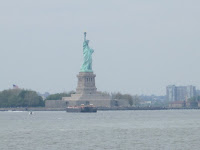