Carl’s Jr. Jr. – How Many Burgers Does It Take To Become A Slayer?

THE CONQUEST
Nothing gets me hungry like a trip to South Cali. The burger culture in state is an unbridled explosion of hamburger like no other. In a big city, like Los Angeles, full of busy people in need of a quick meal, there is a burger on practically on every corner. After a long day that included a flight to Los Angeles and a metal show at the House of Blues with math-metal grinders After the Burial, all I could think about was a late night, greasy cheese burger.

Practically right down the street from the hotel I always stay at is a Carl’s Jr. Jr and its tractor beam of taste is too strong for me to resist. I’ve been there before and am keeping a check list of all the burgers I’ve had. It started with the Six Dollar Burger and moved onto the Western Bacon Cheeseburger, but that’s because Carl’s Jr. told me too. This time, I was ready to try something else and I figured if you’re gonna eat late night fast food, why go easy?

THE BURGER
With only a few seconds to decide before the driver in the car behind me went bonkers with impatience, I quickly scanned the menu. Looking for the best late night craving killer, my eyes landed on the Grilled Cheese Bacon Six Dollar Burger. It’s a “Charbroiled 100% Black Angus beef topped with crispy bacon, slices of melted Swiss and American cheese, and mayonnaise served on grilled sourdough bread.” Sounds great doesn’t it? No? Go fly across the country, have 5 or 6 drinks and watch a few metal bands rage out on stage. Then you’ll want a burger!

I ordered it along a side of waffle fries, one of my favorite type a fries, and some ranch sauce for dipping. With the bag of food in my hand, I went back to my hotel where I spilled the contents out on the desk in the room. The crispy and hot fries did not last long at all. The starchy-saltiness of the fried potatoes dipped into the creamy ranch dressing is the kind of taste combo that has the word “munchies” written all over it. I tore into the burger not unlike a carnivore of the jungle would it’s freshly captured prey.

The bun was toasted yet soft and mushy. It maintained it’s thickness and supported the rather large and messy contents. The burger was of the standard fast-food frozen variety, cooked well done and probably with a decent amount of chemicals and preservatives, you know, the stuff that makes your mouth water even when you’re still eating it! The double dose of processed cheese, heated up to a soft goo had more than enough flavor to cover up and qualities of a formerly frozen patty. The bacon was good but small and thin, like most fast-food burgers. The whole thing would’ve come together came together to satisfy my intense late night hunger pangs if it weren’t for the mayonnaise. I’m not really a fan of the condiment to begin with but this mayo in particular had an odd tang that almost gave it an anchovy like taste. BLECKKK! Next time, I will have to order with out.

Don’t live any where near the west coast? Well, that’s too bad but it won’t stop you from becoming a Burger Slayer. While you’re there be sure to play a game of Burger Invaders in the Carl’s Jr. Arcade. 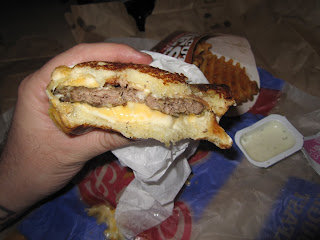 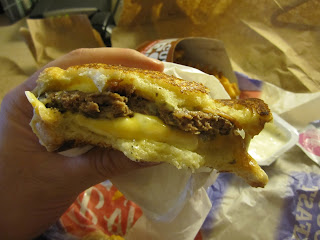 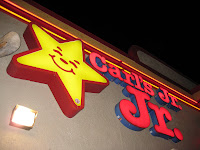 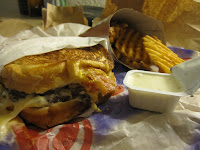