THE CONQUEST
It was the last day of the NYC Food Film Fest and curator / burger fanatic George Motz was sending it off in true style. George and the other festival organizers set up a pop-up Burger n’ Beer Garden party underneath the Brooklyn Bridge in the abandoned Tobacco Warehouse. The price of entrance entitled the attendee to unlimited burgers from Pat La Frieda, Burger Maker and Wholefoods Market as well as all you could drink beer from many microbreweries. Not only was it a grand way to celebrate the end of a fantastic festival, the beautiful setting and amazing weather created the scenario for an amazing NYC style Sunday night event. 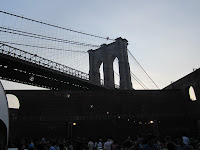 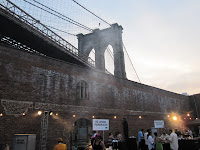 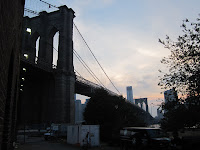 Along with the burgers, the World’s Longest Toppings Bar from Wholefoods Market and copious amounts of beer, the festival also spotlighting the Best of George’s “Hamburger America” Documentary and the full length feature “Beer Wars.” The latter, an independent film taking a look inside America’s beer makers and the distribution system used to bring you the brewski’s. “Director Anat Baron takes you on a no holds barred exploration of the U.S. beer industry that ultimately reveals the truth behind the label of your favorite beer. Told from an insider’s perspective, the film goes behind the scenes of the daily battles and all out wars that dominate one of America’s favorite industries.” It’s told through the opinions and stories of Anat as well as independent brewers; Sam from Dogfish Head and Rhonda from New Century Brewing.

In other words, if you love microbrews, burgers and picturesque NYC locations, this was THE event to attend. Even Mayor Michael Bloomberg was on hand stuffing burgers in his mouth! The Mayor presented director David Sigal the Food Film Fest awards for “Made in New York Award” as well as the “Feature Film award” for his film Florent-Queen of the Meat Market. It was the kind of special event that only happens in NYC … or Chicago.

My pal JoeC from SteakClub7 met me under the bridge where we met with Dmanburger and took no prisoners eating and drinking our way around the party. 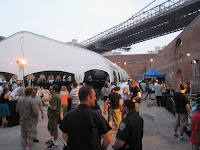 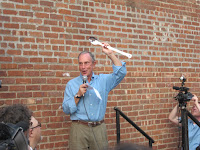 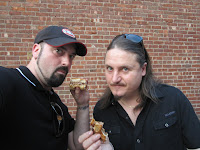 THE BURGERS
Pat La Frieda is to beef what Jay-Z is to hip-hop. Neither of them invented the game but their home town heroes and can do no wrong while they continue to make this city a great place to live. His booth seemed like the most logical place to start. With a glass of beer from Stone Brewery, we got in the long line for burgers. Large trays filled with slider sized balls of ground beef were being brought out constantly as several grill chefs were smashing them on griddles, seasoning and cooking the burgers. There were 2 people per grill; one for the beef and one to grill the buns. The burgers were coming off rapid pace and the long line didn’t really take that much time to get through. Joe and I grabbed 2 burgers each and then realized our mistake.

When it comes to burger toppings and condiments, I really don’t need much (although I am prone to trying crazy toppings) but I did want some cheese. Joe and I walked over to the Wholefoods “World’s Longest Toppings Bar” which we immediately nicknamed the “World’s Longest Line For Toppings Bar.” It was at nearly 3 times longer than the wait for burgers! My perfectly cooked, juicy sliders from Pat La Frieda were quickly cooling off. I couldn’t wait and took one down sans toppings. Thank god for short lines at the Dogfish Head stand!

The first burger was good, real good in fact and while I wished for a slice of cheese, the naked burger allowed me to actually taste the beef itself. Served on a mini white squishy bun, this little beefy gem was everything I hoped it would be. Perfectly seasoned, quality, juicy, grounded, loosely packed, flat-griddled, hot burger yumminess. I knew my ability to NOT immediately indulge in the 2nd burger was going to be tough, but I wanted those toppings!!

With choices from artisan ketchup’s, peppers, cheeses, sliced beef and all kinds of sauces, I could see why the line was so long; what to put on your burger!?!?! As I scanned the trays, 2 trays side by side caught my eye; 1. hot melted, unsalted butter and 2. warm peanut butter. Yeah baby! It was time to desecrate the time, care and quality that La Frieda puts into their meats by transforming it into a gooberburger with cheese!! I took one side of the bun and gently dunked it into the butter and then spread some of the peanut butter on top. I slapped on a slice of cheese and then just because I could, I added 1 slice of prosciutto. Not looking to make the mistake again, I filled up another carton with toppings for my next burgers.

Joe and I walked over to a table, with a brief pit stop for some Coney Island Beers from Shmaltz Brewing, and then let the burger madness begin. The tornado of flavors whirling around in my mouth were almost too much to process. Some might have said I was out of my mind by essentially combing 3 different sandwiches (burger, peanut butter and Italian) in one tiny slider but I felt pretty pleased with myself. WOW!!!!! It was a taste bomb!! The explosion of salty and sweet tastes were incredible. Joe gave me a pretty crazy look and I realized by eyes were popping out of my head. This was a delicious frankensteined sandwich. 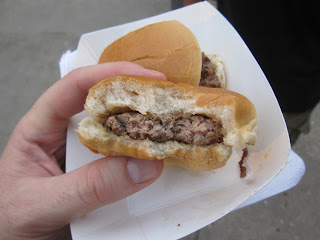 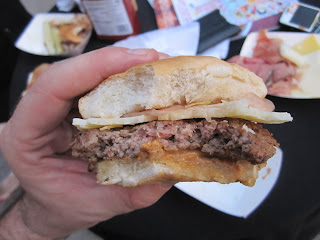 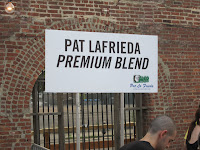 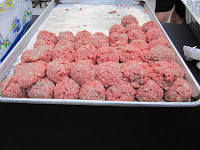 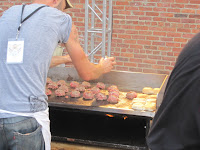 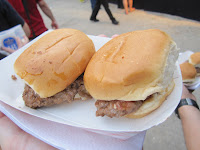 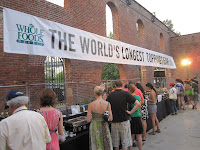 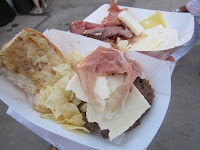 Both of our tastes buds were buzzing and the euphoria of eating and drinking had Joe and I all charged up. “Buddy!” Joe looked at me, “We need more burgers right now!” He ran over to the Burger Maker stand which had NO LINE and returned with 2 more sliders for each of us, while I grabbed a couple of beers from the Brooklyn Brewery. Reaching into the tray of toppings bar goodies, I grabbed a slice of cheese and slapped it a top my burger.

Joe and I sunk our chompers into the burgers and after the first bite, we both looked up, right into each others eyes and muttered a collective “WOW!” Heads down, teeth back in, I finished off the burger unsure of what I had just eaten. No, it wasn’t strange or bad. In fact, it was quite the opposite! This burger was AMAZING! The medium cooked slider was bursting with juicy savory beef flavor. With no prior knowledge of Burger Maker, I thought to myself, “am I eating the most perfect burger meat ever!?!?!”

If I could present to you exactly how I think a great burger patty would taste, it would be this burger. It was juicy but not greasy. It was savory but not salty. It was all intense beef flavor. At first thought, I wondered if this was some crazy high fat content burger unlike the burger standard of 80% lean to 20% fat, I thought this could have been a 60/40 and the cooked down fat was pulling tricks on my taste buds. If it was, I would be very upset but still admit that it was a great tasting burger.

Joe and I had hit our burger limit and honestly, I didn’t wan to subject my taste buds to another burger in case it was inferior to the magic I had just consumed. We walked over into the movie tent, grabbed some beer and let it all soak in. As the Best of “Hamburger America” movie started Joe had to leave but I decided to stay. While trying out the very flavorful light beer Edison and its sister beer, the caffeinated Moonshot, I spotted someone in a Burger Maker t-shirt.

I walked over and asked “excuse me. Are you with Burger Maker?” Jamie Schweid introduced himself and said “yes.” I must’ve come across like Chris Farley in his fan skits from SNL when as I said to Jamie “Wow. I love your burgers.” Jamie laughed and told me the nearly 80 year old story of the company. Jamie is the 4th generation in a long run NYC based family business that began in NYC’s meat packing district. Their beef comes from certified humane raised cows and processed in a large plant in NJ. They only recently started to pack and produce ground beef for home consumption, relying on the restaurant industry business for years. You can now order it yourself from Fresh Direct where you can choose an array of styles.

That’s when I popped the question; “just how much fat content was in the mix you served today?” With a look of pride, Jamie answered confirmed that it was indeed 80/20 mix. I couldn’t believe it. The burgers were so juicy and flavorful that there just had to be some kind of secret. Jamie said it’s all in the beef and that’s when he invited me out for a field trip to the warehouse. I knew we were about to become very good friends. Jamie had to run off to help the Burger Maker crew but handed me his card and promised to be in touch. 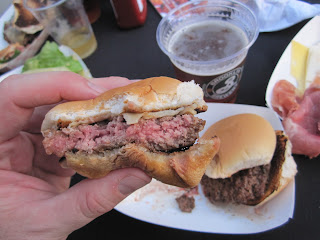 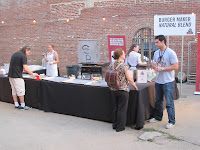 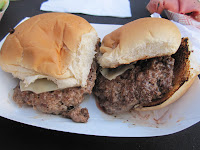 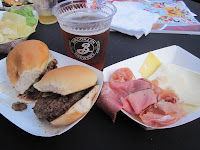 Still reeling with excitement, I turned around to get another beer. Standing there was Dmanburger, slugging back an Edison. I joined him…for several more rounds. We hung out for a bit watching the awards, “Beer Wars,” talking with George Motz and hanging out with the ladies of 7B, the Horseshoe bar. It was a great time and I truly appreciated the food, the drinks, the people, the hospitality and the beautiful setting. Sign up for the newsletter now so you don’t miss out on this event next and every year! 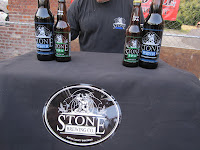 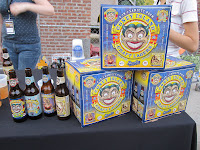 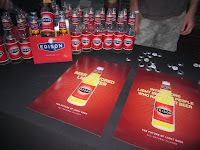 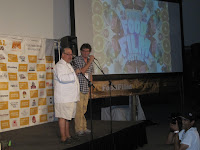 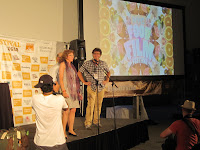 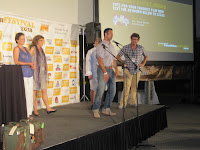 Many thanks to JoeC, Dmanburger, the ladies from 7B, Jamie from Burger Maker, Chloe, Seth, Casey, George and the entire NYC Food Film Fest crew for an amazing time!