THE CONQUEST
The popular website for foodies, Grub Street, recently published a story that had all us New York foodies buzzing. It was their comprehensive list of “The 101 Best Sandwiches in New York“. I’ll admit, the minute I heard about the story, I jumped over to click through and start up a list of places I needed to eat. While there were several sandwiches immediately spoke to me, I was taken back that not a single burger had made the list. I mean, if a burger isn’t a sandwich, well then what the hell is it!?!?!? I was angry. I was puzzled. I was let down and I was very confused. How dare a site that I respect so much, straight dis on the sandwich I respect too much!??

I took a deep breath, calmed down and told myself that the Grub Street folks must believe that burgers are so specialized in the sandwich family that they deserve not to be lumped in with such a generality as “sandwich.” I know there’s a lot of great food out there and although it may seem like all I eat is burgers, wings and steak, I really do enjoy a wide array of foods. Perhaps this list was just a road sign pointing me towards other great things to eat.

Just like some people rely on my to point them in the direction of a delicious cheese burgers, I too have my sources. Every Jedi has a master and once in awhile a patawan comes back with a different use of the force than their master. In a perfect 80s movie turn around ala “The Karate Kid”, JD, one of my fellow members of the NYC Wing-Off did such a thing. JD saw the same Grub Street list I saw but was inspired in a different direction, but I will let JD tell you himself…

THE 101WICH
JD: Thanks to Burger Conquest for letting me update you guys on the state of sandwiches in New York. Obviously this is a topic I feel strongly about (and yes, a hamburger is indeed a sandwich), so when New York Magazine put up a list of the 101 best bread-meat-bread babies you must try in the five boroughs, I threw out my bucket list–which was mostly sandwich related anyway. A hundred local eats, in no specific time frame, that I would sample and rate at 101wich.com. It’s not a crazy mission. I think of as fulfilling two things: 1) hunger and 2) journalistic accuracy. Because the world needs a sandwich ombudsman. Or woman.

JD: So far my sandwich missions have yielded positive results. Eating around my neighborhood of Cobble Hill I can grab a smoked meat at Mile End, a killer egg sandwich at Prime Meats, a milk-braised turkey leg at Henry Public, or some fantastic pork belly at Char No. 4. I’ve had the pleasure of seeing my friends at Red Hook Lobster Pound at the Brooklyn Flea, I dove into a smoked chicken sandwich from Alidoro and a chicken parm at Torrisi.

THE SANDWICH
Rev here again. When JD told me of his exploits I became instantly ecstatic. I’m all about good eating and love it when someone who’s palette I trust can now be trusted as a food filter. I showed JoeC from SteakClub7 who almost had an aneurysm! “We have to go eat one of these sandwiches with JD!!!” Easier done and said! With one email, the 2 of us were planning a trip to Despaña. Located there was #55 on the Grub Street list the Picante! A bocadillo with Despaña brand chorizo, a slice of Mahon (cow’s milk) cheese, piparras (basque spicy guindalla peppers) and a dab of aioli sauce all warm pressed in fresh bread.

Sounds amazing doesn’t it? That’s kind of like everything at Despaña! A gourmet Spanish deli, grocery and bocadillo (sandwich) shop, being a relatively simple concept, there is actually nothing simple about the place. You can buy prepared meats in bulk along with other Spanish cooking ingredients, or you can move along to the back of the store and have some of their fresh made food and coffee. Once the 3 of us showed up, that’s exactly what they did.

We started with a Serrano Ham & Manchego pintxo (bite size version of bocadillos). It was so damn good! The cheese was fresh and it’s mild flavor allowed the savory ham to dominate the palette. JoeC and I split it, getting about 1.5 total bites each. I could’ve eaten 10 more of them!! Thank god of Picantes came out so quickly or I would’ve gotten another.

HOLY MOLEY!! Every part of the sandwich was INCREDIBLE!! The bread was fresh made with a crunchy exterior but soft and warm on the inside. The cheese was tangy with a mild sharpness that really left its mark on the sandwich. I’ve never had chorizo this good before. It was everything chorizo is supposed to be; a little smoky, a little spicy and with a robust pork flavor. I was truly moved to one side of myself after eating the sandwich. In fact, I bought a Navarrico pintxo on the way out!! I ate the “Chistorra” Despaña brand thin spicy sausage, roncal (sheep’s milk) cheese and sweet strips of piquillo peppers warm pressed, for breakfast the next morning and let me tell you, that was one hell of a way to kick off my day!! 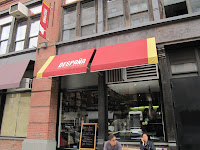 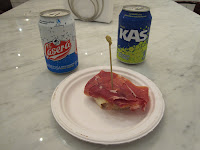 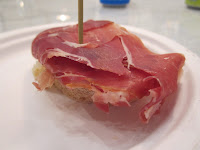 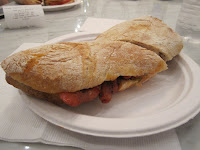 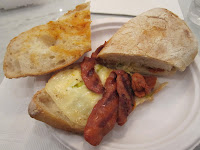 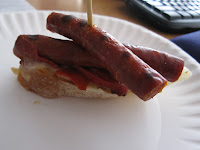 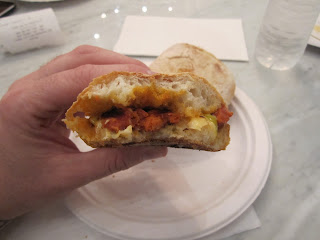 THE 101WICH PART 2
JD: I felt like I’ve had a lot of sandwiches. I’ve probably only had about a tenth of the list. So, while there’s more work to be done, I went on a joint 101wich/Burger Conquest mission to Colicchio and Sons, because I heard Top Chef’s head judge can make a mean pork loin with bread and butter pickles, #25 on the Grub Street list.

JD: Rev and I took the wives on a little brunch date set against the background of a 100-degree Gay Pride Sunday. At 11 a.m. there was no Colicchio, and no sons … but there were a ton of empty tables. There were also about two dozen highly prized microbrews on tap (Professor Fritz Briem, 1809 Berliner Weisse, you are something special). So, with that we started hoisting a couple of beers and mimosas. We flip open the menus. Cue record scratch. No pork loin.

JD: The sandwich that I braved the crowds of Chelsea on a national gay holiday for was not on the menu. I remained calm and told the waitress that I saw it on their lunch/brunch menu online. I canceled dinner there because I knew this sandwich was only available during the day. That’s when the staff of C&S stepped up and, despite prepping for a busy brunch morning and probably cursing my name name in the walk-in, made me a sandwich.

Rev: JD had just got done explaining the 101wich and that’s when I stepped in. I hate, Hate, HATE to be that guy but if JD didn’t get his sandwich, it was going to set the tone in such a negative manner. I busted out my Burger Conquest business card and politely explained what he and I were trying to do. Much to their credit, the staff of Colicchio and Sons were incredibly caring, friendly and accommodating. What does that mean? I got a burger, which was HIGHLY recommended by our server, but we’ll get back to that in a minute.

JD: The roast pork sandwich was pretty damn good. I have a nostalgia for bread and butter pickles … they’re not my favorite pickled cue, but the sweetness and neon yellowness reminds me of making sammies as a kid. That paired with some thick country ham, spicy chorizo (I think)–and since they didn’t have sliced provolone–some truffle cheese (if you must) made one heck of a panini. Critics be damned … I have nothing but love for Tom and his kitchen. You won the Quickfire to my heart. 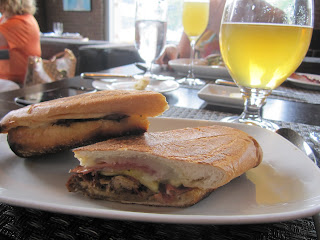 THE BURGER
After explaining our dilemma, the Colicchio and Sons hosts jokingly asked me if I was going to “take one for the team and order a burger?” What was I to do especially since I had just had my arm proverbially twisted?? I ordered the Tap room burger with balsamic onions and pecorino along with the same glass of Prof. Fritz as JD. The beer was truly amazing and if you consider yourself a fan of beers, it’s worth hunting a bottle of it down (read story here).

Thankfully the food came very quickly despite the fact that it’s all hand made in one large wood burning oven, beautifully parked right in the tap room. Without having taken even a single bite, one look told me that this burger was going to be a winner. The fresh sesame seed bun had been perfectly grilled to a light brown and placed a top a heaping pile of onions and ground beef with a perfectly melted piece of cheese a top. One bite confirmed the truth!!

The patty was cooked to an absolute picture perfect medium-rare and was exploding with juiciness as if it was it’s own little meat volcano. This was far and above the juiciest burger I’ve ever had the pleasure of eating in NYC! The ground beef was loosely packed for a lighter feeling bite but had the taste of ground steak. The grease was running down my hands and arms and I was having trouble maintaining a semblance of decency in trying to eat it. The caramelized onions had a delicate balance of sweet and sour while the cheese was mild but had a very distinct flavor. Even though the bun was lightly toasted it was still pillowy when bitten into. I did add some of their smoky and thick bacon to the sandwich which made it even better!! 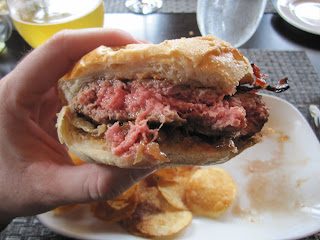 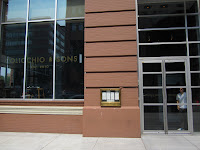 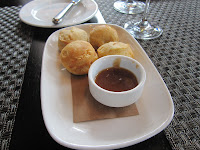 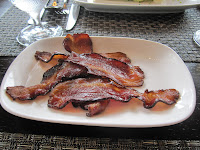 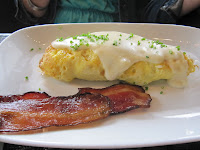 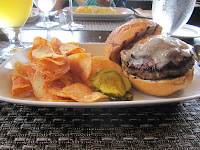 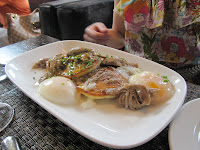 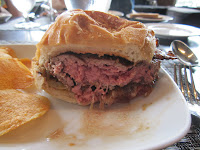 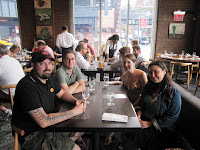