In-N-Out Burger – A Day of Mayhem

THE CONQUEST
I remember being 16 and seeing Anthrax for the 1st time on the Clash of the Titans tour with Alice In Chains, Megadeth and Slayer. It was one of the first concerts I ever attended and it changed my life. While I sat in the 23rd row watching my heroes mosh it up Not-man style, I saw people standing around on stage with laminates around their necks. I would’ve done anything to have a laminate and that moment defined the rest of my life. 20 years later, I’m still in the music business and having stage access with a laminate is part of my every day life.

As an artist manager and director of business development for a ticketing and fan club company, I spend a lot of time going to shows and hanging out with bands. This past weekend I was in San Bernardino, CA hanging out at the Rockstar Energy Drink Mayhem Festival. We had 2 of our clients, the thrash band Shadows Fall and stand up comedian, Big Jay Oakerson, both performing on the tour. I went out to the first date of the festival to help make sure everything gets running smoothly and to do some hob-knobbing with metal’s finest.

A large part of my day was spent escorting Big Jay Oakerson around the festival as he interviewed band after band, acting as the correspondent for Fuel TV’s “The Daily Habit.” He started off easy with Brian and Jason from Shadows Fall following with their past tour mates, Five Finger Death Punch. Although the fine folks at Fuel gave Jay a list of “serious” questions to ask, it didn’t take long for either conversation to devolve into complete goofiness. Both bands were great sports about it and everyone had a big laugh. 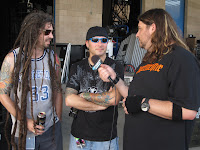 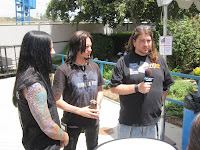 Once Jay finished up with the guys in FFDP, we ran over to the Jagermeister Jager Music Stage where Jay had to perform his first set along with the Jagerettes.

A few hours later, once the field was packed with nearly 10,000 people, Shadows Fall came on and put on an amazing display of talent, skill and entertainment. It’s been a minute since these guys have toured in the US and this show was a statement that they are out on Mayhem to kick some serious ass. 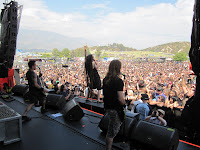 During their song “The Power of I and I,” the band kicked up a mosh so wild that it spread across the whole field. The audio isn’t great but you’ll get the point when you see the maniacs grinding in the pit! Be sure to check out their tour manager, “Big Rog” getting his groove on while working the lights from stage.

Next up on the stage was Cleveland, OH’s Chimaria. Check out bassist Jim LaMarca rocking a t-shirt from Melt Bar and Grilled on stage! Chimaira raged so hard on stage that they started a REAL fire in the pit! After a few brief moments of pause, the guys decided to keep flaming the fans of metal fury while fans tried to stomp out the fire. 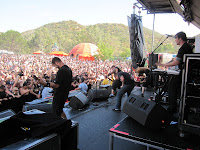 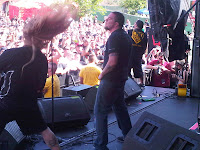 After Chimaira, Jay got a chance to interview Wednesday 13 from the band The Murderdolls. They aren’t on the tour but their drummer, Joey Jordison, is playing with Rob Zombie on the main stage. And speaking of Rob Zombie…as Jay’s final interview, he got to spend some time with Rob. I know Jay was pretty nervous as Rob is one of his favorite artists but he handled like a pro. By “pro” I mean making a lot of silly tour jokes and having a laugh with one Mr. Zombie. 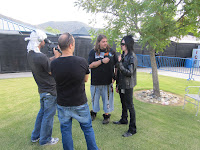 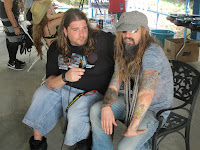 After the interviews, it was back to the fields for more side stage madness from stage closers Norma Jean and Hatebreed. I could only watch a few songs from Hatebreed’s over the top performance as I had to run with the Shadmen to their signing in the Rockstar Energy Drink tent. 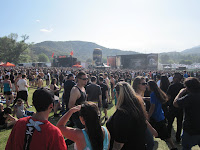 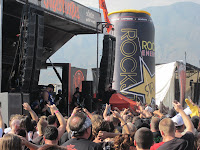 We all climbed into the Mayhem Rockstar Energy Drink Festival jeep and took a speeding ride through the crowds to where the booth was located. I won’t lie, it was one of the most fun moments of the day!

Once we got to the booth, the line to meet the band was nearly a mile long! 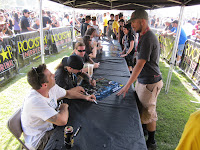 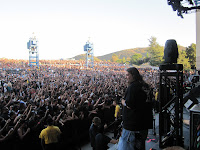 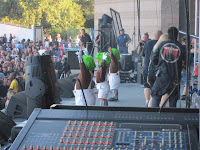 Once Jay’s 2nd set was done, so was I! That meant it was time to just hang out, watch Rob Zombie and Korn, hang with friends and unwind with a couple of beers. But, you know what makes attending The Rockstar Energy Drink Mayhem Festival in California so awesome? Stopping for In-N-Out Burger on the drive home!

THE BURGER
As luck would have it, there was an In-N-Out just off the highway before the exit for my hotel!! This now makes the 4th time I’ve written about In-N-Out on the site and the 4th time that I’ve been able to take my signature “Left Hand Grab” photo from behind the wheel. There are 6 ways to Sunday to order your burgers there but I like to kick it old-school: 2 cheese burgers with raw onions, no tomatoes and a Diet Coke. God bless In-N-Out and God Bless America!!!

Now, if I could only get an All Access VIP laminate for In-N-Out or even just a couple of free burgers my life would be all set! 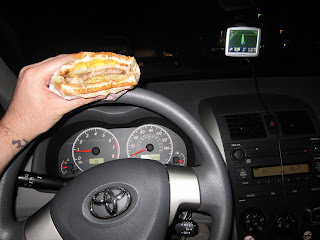 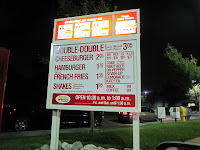 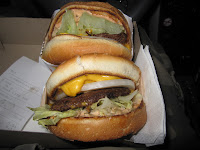 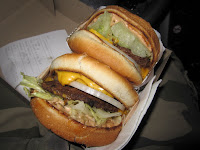