THE CONQUEST
File under “things to know about Rev,” I don’t like seafood. Never have and at age 37 I think I can safely say, I never will. As the son of a very proud seafood eating and fishing fan, it’s not like I haven’t been exposed. Believe me, I have many a memory of sitting at a crab shack in Florida and throwing temper tantrums because everything smelled like fish and the only thing served I would eat was bread. Thankfully Bones (my Dad) was a crowd pleaser and always made sure to stop by a fast food burger chain on the way to or from one of these meals. Little did pops know it but his burger problem solving techniques planted a deep-seated feeling of comfort and happiness in my brain.

Fast forward to now. I’m an adult approaching middle age, living and working NYC and married to a fantastic lady…who loves seafood. Cara is a fantastic woman who is smart, very humorous and supportive person. She finds my burger passion and prose to be entertaining, if not delicious. She makes jokes about wishing I had started “Diamond Conquest” or “Lobster Conquest,” which are very funny but in the end, all jokes are based in truth and in this case, Cara loves seafood.

One day as I am clicking around the burgernet I come across the review of a very well praised and hip seafood restaurant in NYC that also happens to serve a burger made with Pat LaFrieda beef. All the light bulbs, bells, whistles, hockey goal lights and slot machine jackpot alerts in my brain all start to sound at the same time. Now I could take my wife out for a fantastic and romantic seafood meal where we didn’t have to do as my Dad would and stop for a burger on the way home!! What will they think of next!?!? Bones would be so excited.

Lure is the brain child of award winning Chef Josh Capon, John McDonald & Josh Pickard. Located in New York City’s Soho area, this basement restaurant is made up to look like the inside of a yacht’s hull. Since my discovery of Lure, we have talked many times about going and I have even in fact tried one of their burgers. Lure won the People’s Choice award Food Network NY Food & Wine Festival Rachel Ray Burger Bash in 2009 with their “Bash Burger.”

We were instantly greeted at the hostess stations by a very loud and hilarious announcement; “the burger boy is here!” We were very quickly shown to our table which was an over sized round booth with more than enough room for a meal fit for a King and Queen as well as my camera, iPhone and both of our bags. Cara opened the menu and her eyes popped out of her head. As I was about to open mind, the maître de came up to the table and said, “Listen burger boy, no need to open the menu. For you, I suggest our secret menu item, the bash burger. It’s the burger we served at the Burger Bash. It’s not on the menu but we would love to make you one.”

THE BURGER
Shortly after our order was taken our server arrived with deviled eggs and shrimp skewers. Not really a fan of either, I passed my shrimp onto Cara but did bite into the egg. My #1 issue with deviled eggs is rubbery albumen. I just don’t like the texture and in general regard eggs as a bunch of bites of some white stuff I don’t like just to get to some yellow stuff, which I love. This little appetizer further cemented my opinion. The white casing was indeed cold and rubbery, which I could do without and a fantastic yolky center that was creamy and delicious. So good in fact, that I wished it had been made into a dip.

Let’s be honest, you could say my diet is lacking in vegetables but when it comes to something like boiled and salted edamame, I could easily put away 200-300 in one sitting. If you feel the same way, get your patoot down to Lure as they have some of the freshest edamame I have ever eaten. The little green beans come still in the case and have a slight buttery taste is oh so fantastic. In fact, I opted to continue popping them into my mouth over Lure’s home made potato chips, which are also very good. Do NOT miss out.

God bless Lure Fishbar. If there is one thing they do well that most other’s look over, it’s presentation. Be it the quality of service, the décor, the food, cleanliness of the washrooms, the music playing in the restaurant or repeated table pass bys from the maître de saying “burger boy,” it is clear that no detail is too small. As a fantastic example of said theory, the “Bash Burger” comes topped with 2 onion rings.

You’ll be hard pressed to find an onion ring that matches the crunch, flake, bite, size and taste of the Lure onion ring. It’s big, hot and savory side dish that could almost swoon you away from your main course. Nothing is disgusting like an onion ring, which once bitten, produces a slimy onion slice that pulls out leaving behind just the crust. Onion rings should be about the whole experience and the Lure “O Rings” will not disappoint.

Also of note, is the Mac and Cheese. It’s a crunchy on top, soft in the middle bowl of two things that are just never bad, cheese and pasta. Serving this dish is a dicey move for a restaurant especially when most of the population of the US grew up and still the prefers the stove cooked and straight out of the box version of it. Lure did a great job making their own version but I wouldn’t necessarily say you have to get it. Bottom line, if you like Mac and Cheese, you’ll appreciate this one.

Even though I had eaten this burger at the aforementioned Bash, I did say I wanted to eat it at the restaurant. With much hype and anticipation building towards the Lure Fishbar burger, the moment had finally come. The entire sandwich was right in that not-too-big yet not-too-small size that fits perfectly in your hands and in your belly. The beef is tightly packed giving it a slightly coarse texture. The juiciness of this patty would turn your regular hamburger bun into mush but not the roll used here. The “Bash Burger,” a 6oz patty, caramelized onion and bacon jam, shaved pickles, American cheese, and secret sauce. It’s served on a fresh made soft yet sturdy, toasted sesame seed bun. Taken from high quality cuts, the beef tastes natural and yet still has the subtle hints of flavors that LaFrieda has become known for. I really, really loved the bacon and onion jam and would’ve loved it even more if they had not applied it so sparingly. The magical meeting of salty and sweet in the savory profile of these two items when combined is a taste nirvana. I just wished there was more. The creamy slice of cheese worked itself into a mediating position in the flavor of the burger without ever taking the spotlight away from the beef. Was it good? Definitely. I do have one complaint though and it’s the ketchup, which wasn’t bad for what it was but in general, I don’t like the stuff. Don’t worry Lure, it’s not you, it’s me.

Having exposed myself in that fashion I will have no problem admitting I like ketchup on French fries. I see it as the exception to the rule that proves the rule. Whereas the ketchup completely, detracted from the burger, it made the salty and crispy fires at Lure even better. Be sure to get your fries with a side of the Dijon style mustard, one of my favorite ways to eat this hot tasty side.

How were the Smoked Salmon Pizza and the Steamed Branzino? I have no idea but I can tell you Cara claimed she could not wait to eat here again! 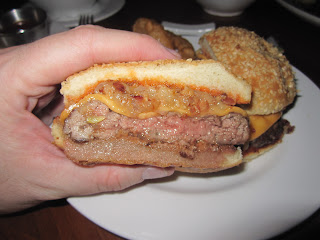 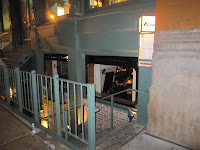 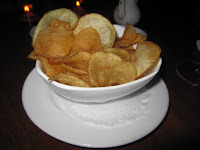 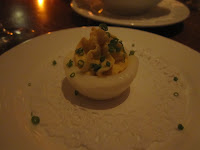 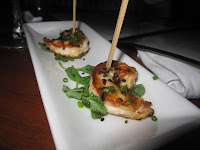 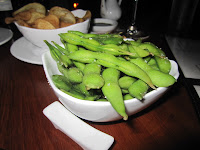 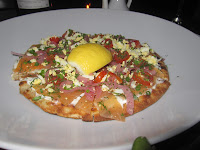 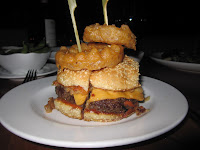 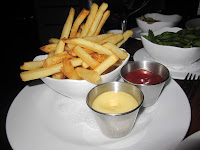 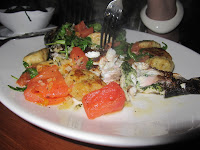 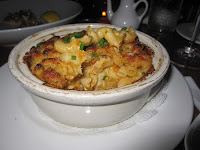 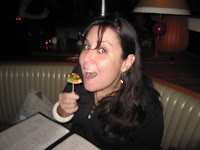