THE CONQUEST
Some people use words while others mean them. When Andrew and Jonathan Schnipper added the word “Quality” to the name of their new school version of the luncheonette bearing their family name, they did it with conviction. These 2 smiling busts of energy are the creative food geniuses behind the ever popular Hale and Hearty Soups restaurants. In 2006 they sold off the very lucrative and STILL delicious business and started off on a road trip. The 2 brothers drove around the great states in America eating every burger of lore they could find. Upon their return to the big apple, they launched Schnipper’s Quality Kitchen.

Located at the foot steps of the NY Times Building and across the street from the ridiculously busy Port Authority building, it’s easy to get to and worthy of a breakfast, lunch, dinner or a big old snack. Accompanying one of the best burgers in the city is an array of carefully prepared classic American food like creamy mac and cheese, fantastic tacos, superb grilled cheeses, “hearty” soups and same damn good hot dogs. Their fries are crispy, golden and delicious not unlike the famed fries of a popular burger chain but oh so much better. Be sure to ask for a selection of their house made dips to give you some choices that coincide with your ketchup. I suggest a sampling from each column but be sure you get one of their amazing burgers.

So when my buddy John, who is lucky enough to be employed by the Prince of Darkness himself, Ozzy Osbourne, came into town, Schnipper’s was an easy choice for a Burger Conquest.

THE BURGER
When I hit up the brothers Schnip’ about coming in, Jonathan let me know they had made some changes to their menu including new green chiles, hot dogs and are now using Pat Lafrieda for their ground beef. “I’m curious to know what you think,” he said which in no way whatsoever, puts ANY pressure on me to properly criticize his dreams! (wink wink).

Damn! The Schnipper burger is softer and juicier than before with even more amazing flavors. If ever a burger has truly melted in my mouth, this is the one! As always it comes on a soft bun and dressed with only the freshest of produce. When placing your order, don’t even weigh out the options, go with the Schnipper’s cheese blend. I’m not sure what the blend is but I might venture its made of equal parts awesome, delicious, fantastic and yummy.

The newly re-birthed Schnipper’s Green Chile Burger (which comes automatically with the special cheese blend!) is WITHOUT QUESTION the best green chile burger I’ve ever had. No idea where they’re getting the chiles from but their smoky pepper flavors are fantastic. It’s so good in fact, you should absolutely consider ordering a Schnipper’s Green Chili Cheese dog. Which is EXACTLY what I did. Why should you? Because it’s the best damn hot dog you’ll ever had. It’s so juicy and beefy and will leave your mouth watering. That’s coming from someone who only ever eats dogs at baseball games or when he is wasted, neither of which applied today.

But then again, I shouldn’t be surprised…everything at Schnipper’s is Quality. The Schnipper brothers do it right and with one of the most friendly restaurant staffs in NYC. 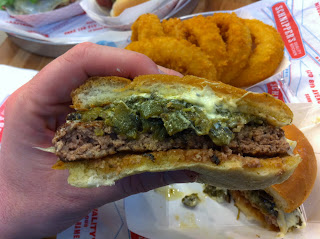 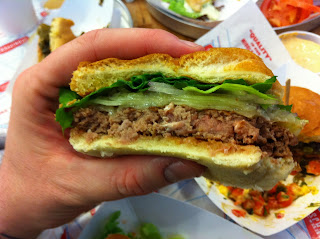 Being a veggie around me can sometimes be, well let’s just say “intimidating.” John, w
ho happens to be one can tell you, the veggie burger at Schnippper’s matches up along with his favorite part of the meal, the mac and cheese. To show his appreciation, John hooked me up with a ticket and a VIP pass to see Ozzy that night at the Izod Center in East Rutherford, NJ. I’ve seen the Ozzman, no joke, probably 40 or 50 times. He’s one of my all time faves and ALWAYS puts on an awesome show. I have to say though, the guys he has playing with him now are AMAZING and play more like a band than a group of superstar players. Ozzy was absolutely crazy on stage and the whole audience got to participate in a very special moment at the show.


After eating lunch here I couldn’t get the burger out of my mind. Two days later, I had to squash the crave and ordered me for delivery. 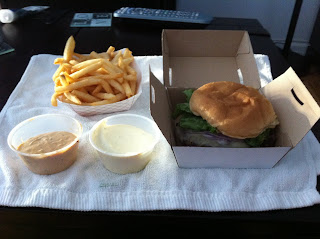