Wing-Off 15 – An All-In Celebration at Mudville9

From the same people that bring you Burger Conquest, we bring you the New York City Wing-Off. A crew of men on a search for the best wing in NYC. Wing-Off judges solely on quality of the Medium and Hot wings only. Service, ambiance, beverage selection, price and other menus have no factor but they sure do count for a good time! Also, NO WOMEN ALLOWED!!

The bracket challenge to crown a champion for the best medium and hot wings in New York city came to a close on Saturday, September 25, 2010. On that day, Bar Coastal was crowned the winner and awarded the Burger Conquest Hot Golden Cock Trophy. 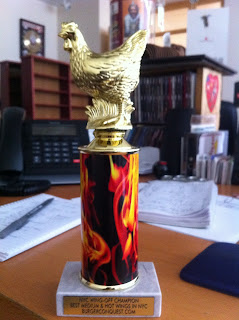 Our 4 year quest had come to close but we weren’t done eating hot wings, not by a long shot!!! A well deserved celebration was in order and there is only one place in NYC that could help us do it the right way. It was time for a Wing Ding at Mudville9! The NYC Wing-Off crew had been there on Wing-Off 3 and it was there we learned a vital lesson, there is no VS. with Mudville9!

Located in New York City’s somewhat desolate Financial District, this unassuming bar looks the same as any other sports bar. You’ll find large tables, booths, men of all ages cheering on their favorite sports teams on one of 15 flat screen TVs, pounding beers, eating wings and generally having a great time. But this 33 year old bar has a secret weapon called a “Wing Ding.”

What is a Wing Ding? All you can eat wings, fries, unlimited pitchers of beer for 2 hours! It’s only $25 per person! There is a 6 person minimum and for an additional $5 you can upgrade to premium beer selections. Think about the damage you could do in 2 hours? Allow me to confirm, you can do it and more. That is EXACTLY why Mudville9 should not be entered into a VS situation. Don’t misunderstand, the wings are fantastic, really good in fact, but who in their right mind wants more wings than they can possibly eat in 2 hours?!?! (Don’t answer that question.)

Another important thing to remember about the official NYC Wing-Off, only medium and hot flavored hot wings can be considered for as entrants into the decision. With 10 different house made wing sauces, denying 8 of them would be a crime! But enjoying them as a celebration is a victory unto itself!! The excitement was at an all time high. The NYC Wing-Off crew were ravenously waiting for the 2 hour timer to begin.

THE GATES HAVE OPENED! LET THE HOT WINGS FLOW! 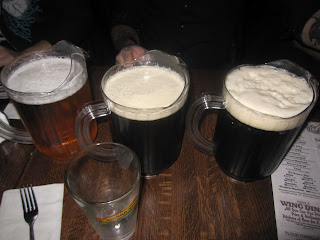 If Bud and Bud Lite is your thing, stick with the $25 special but if you’re a beer nerd like me and the rest of the Wing-Off crew, spending the $5 to upgrade your beer choices is absolutely worth it. The best part, I mean besides the beer itself, is that all the beer comes in pitchers, a rarity in New York bars. As for the fries, go ahead, try a couple, they’re good but go easy! They will fill you up and detract you from the hot wings. 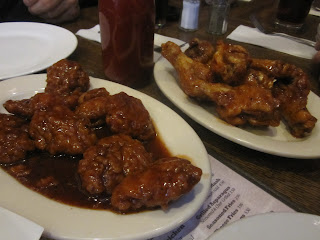 The Wing Ding kicked off with a plate of Jamaican Jerk and the Medium Buffalo. The Jerk are well, SOOOO good. The sauce is both sweet and hot with a nice pepper focus. In an attempt to be poignant, allow me just say “WOW” in describing the Medium Buffalo wings. There’s a nice heat with good flavor. Kyle and I think we placed the mix as Frank’s Red Hot with A LOT of butter and some additional kind of pepper. 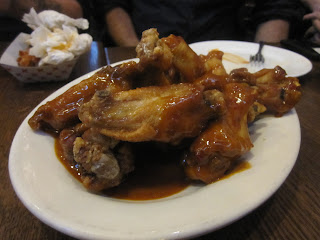 I remember the Teriyaki sauced wings being a big hit on our last visit and was anxiously waiting a re-visit. The sauce was good but there needed to be more of it. Most wing sauces are thick and to make up for the thinner nature of this one, I would’ve suggested bathing it a little more bountifully. 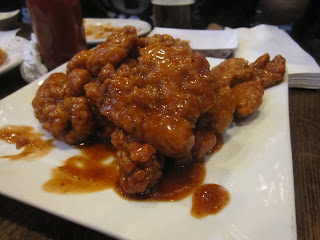 The Thai sauce, oooohhhh, the Thai sauce is so creamy and good. It even has a nice little pepper back side to it. I’m pretty sure Adam P was a mere thought turning into an action away from spooning up some sauce into his mouth. Unfortunately, I didn’t think the amazing sauce paired well with the wing. Both elements are good unto themselves but the sauce just didn’t take to the wing. 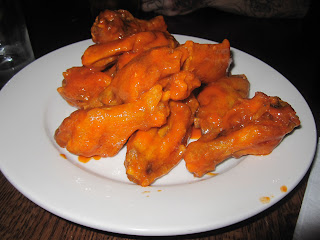 The Buffalo Mild were OK but only worth getting if you want to try every sauce during a Wing Ding or you are a wing novice. It’s decent but for a seasoned winger, this shouldn’t be your focus. 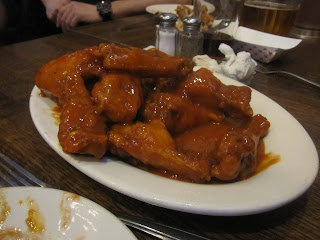 After discovering the amazing sauce that could be made by combining the jerk and the hot I decided it was time to take this party to another level. Who remembers being a teenager and combining a little of every soda flavor into one cup? Where I am from, that’s called a “suicide” soda and it was the basis of our next move.

I won’t lie, they looked at us a little funny when I practically begged them to combine all 10 sauces on one plate of wings. But Eric Schwimmer and the rest of the fun loving staff at Mudville9 are good sports and were happy to oblige. The name “Suicide” when applied to hot wings more often than not refers to a sauce that is ungodly hot and difficult to eat. We didn’t think that fit the bill here and since we were taking a gamble, we have now named this magical sauce concoction “ALL IN” wings! 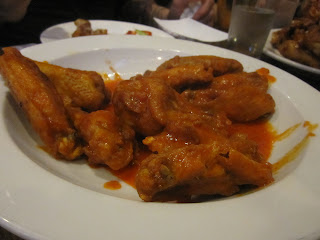 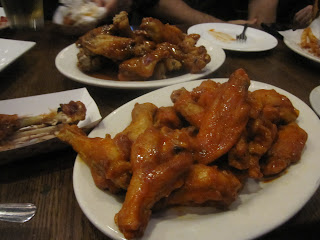 Once all 10 sauces were mixed and applied, a new level of wingitude was achieved. It was unanimous across the table, we all LOVED these. Now the NYC Wing-Off crew can’t promise you that Mudville9 will make these for any buddy but we would definitely suggest you tell them we told you about them! 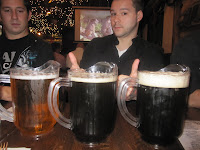 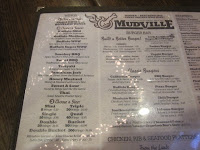 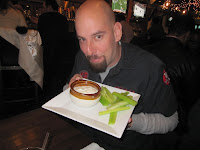 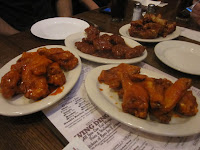 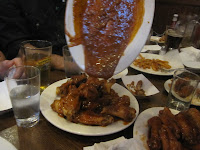 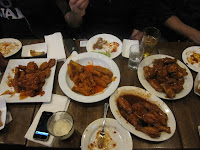 So now what? It’s been 4 plus years, we’ve crowned a winner and even have a victory celebration at one of NYC’s most unique wing joints. The Mudville9 “ALL IN” Wing Ding inspired an idea. What if the Wing-Off didn’t have to end? What if it just changed? What if we could just restart? Well, we took all of these into consideration and with that, I proudly announce THE RETURN OF WING-OFF!!

The NYC Wing-Off is going to kick off again in 2011 but with a new twist. In the past we only judged on medium and hot wings but now, we re-start and ALL flavors are eligible for judging. This ups the competition quite a bit and should make for a lot of fun and well earned tummy aches!

If you have a suggestion for a wing we need to eat or would like to enter into the competition, please send an email to beeftouchdown@burgerconquest.com 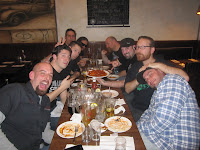 WING-OFF 1
January 28, 2007
Scruffy Duffy’s vs. Atomic at Down the Hatch
WINNER: SCRUFFY DUFFY’S