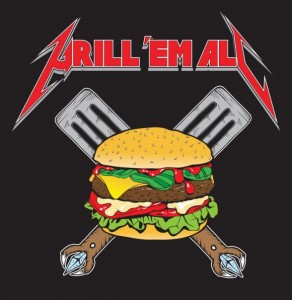 Los Angeles, CA – The Grill ‘Em All Truck debut a video documentary in a series of 4 reality style-TV episodes called the “Victory Lap” today at 12 pm PST.  To celebrate their 2010 victory on the first season of the Food Network’s “The Great Food Truck Race,” the guys from the Los Angeles based Grill ‘Em All Truck made a triumphant return to NYC to serve their burgers. Subsequent episodes will be released the following 3 Thursday’s at 12 pm PST. 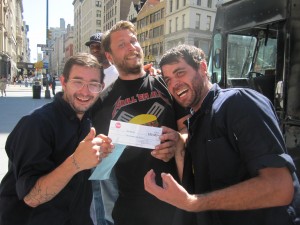 The “Victory Lap,” produced by Grill ‘Em All business manager, Reverend David Ciancio from BurgerConquest.com, hosted 8 kitchen takes overs in 4 days, serving 2000 burgers to their hungry fans. No two services were the same as they were in different restaurants and with a constantly changing and limited menu. While the unique events were extremely complicated and difficult to plan, the guys proved they do what they do best, without the truck that gave them notoriety, THE BEAST! The entire exciting and harrowing event was filmed and will now be released as the Grill ‘Em All “Victory Lap.”

Episode 2
Thursday, January 20 at 12 pm PST
Debut on www.metalsucks.net, a News, Metal and Comedy based website that on a mission to encourage intelligent discussion in and to debunk stereotypes about the music we all love so much.

Episode 4
Thursday, February 3rd at 12 pm EST
Debut on www.gawker.tv, for those with an unhealthy obsession with video, your work can wait.

After each debut, issues can be re-seen and shared on the Grill ‘Em All Truck Youtube.com channel
http://youtube.com/grillemalltv

More information on the NYC “Victory Lap” event and behind the scenes look is available at the following link.
https://burgerconquest.com/grill-em-all-nyc-victory-lap-sells-out

The Grill ‘Em All “Victory Lap” trailer is available at the following link.
http://www.youtube.com/watch?v=FIi6elNoMO8

About The Grill ‘Em All Truck
The Grill ‘Em All Truck is owned and operated by Chef Ryan Harkins and Matt Chernus opened on the streets of LA in December 2009. A year later their gourmet burgers such ass the “Molly Hatchet” (burger topped with seared fennel sausages gravy, apple wood smoked bacon and maple drizzle) have gotten much press, including their participation on the Travel Channel’s “Food Wars.” Their biggest look, being crowned the victors of the Food Network’s reality TV competition, “The Great Food Truck Race.”

Chef Ryan and Matt are available for interviews over the phone and in person. Please contact therev@burgerconquest.com to schedule and for all inquiries.
http://grillemalltruck.com
http://twitter.com/GrillEmAllTruck