A Week In the Life of The Grill ‘Em All Truck
http://grillemalltruck.com
PART 3

I recently went out to LA to spend a full week in the burger trenches with Matt, Ryan and the rest of the Grill ‘Em All Truck staff, seeing what it’s like first hand to be a real Grill ‘Em All Ghoul.

It’s easy to think the Beast and Son of Beast are self contained units where all the cooking is done and when the day is over, it just gets parked in a driveway where it quietly rests before heading out the next morning for further burger domination. But it just ain’t that easy! First of all, there are legal issues in parking commercial vehicles in residential neighborhoods. Also, the trucks need to be cleaned every day, inside and out. This not only ensures a higher quality product but also the California restaurant rating system is now applicable to food trucks. That’s not really a huge concern for Grill ‘Em All as they already adhere to the highest of cleanliness and quality standards but it is very important to them. On top of the parking and cleanliness, trucks also need refueling of oil, gas & propane. These are the natural resources behind burger domination. But what else? Grocery supplies are needed to put burgers in your face. With so many needs in the daily operation, the necessity for one stop shopping is key to the operation. How do they do it? The commissary.

At the end of a long day crushing burgers on the streets of LA, The Beast and the Son of Beast park themselves up in a commissary. It’s the shopping mall of the food truck world. There the trucks can rest peacefully and safe in the gated and supervised lot. They get washed, taken care of and there’s even a grocery supply store where trucks can get the essentials. In fact, most trucks get all of their supplies from the warehouse, but the Grill ‘Em All Truck is not most truck. To make such high end and quality food, they get key items, like meat, cheese and buns from hand chosen, high marked supplies. But things like water, soda and, as the guys call it, “Behemoth bread” are purchased from the commissary.

Seeing the commissary for me was the equivalent of walking into a practice space full of bands. Instead of stored gear, it’s trucks and instead of dozens of bands stringing up guitars, it’s dozens of LA’s most popular food trucks getting street ready. As a reformed geek, I had to say, it was really, really cool to be walking amongst the vehicular spectacles of LA’s ever growing food truck community. 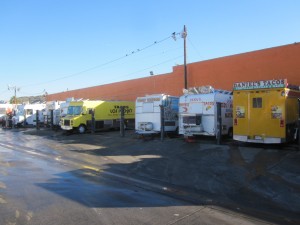 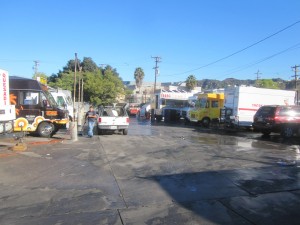 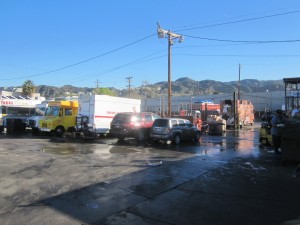 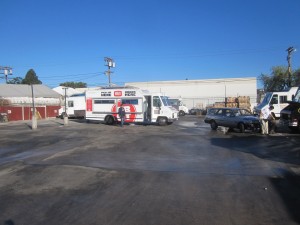 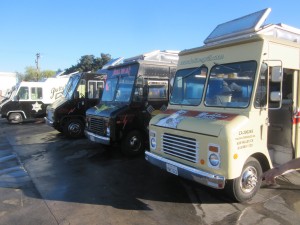 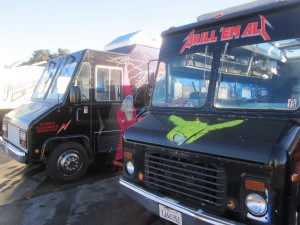 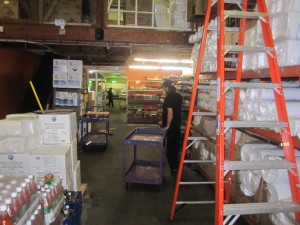 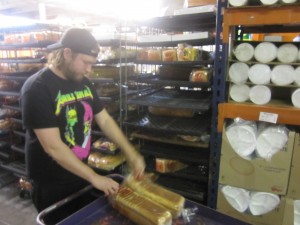 Once the trucks are loaded and ready to rock, they hit the highways and head off into South Cali to bring food to the Ghouls. Today’s mission, a lunch service at Century Media Records in Hawthorne, CA. The folks at Century Media have been huge supporters of Grill ‘Em All from their very first days as a business. Time and time again, they have had successful and fun lunch services at the label’s US headquarters. In fact, the first segment of the episode of “Food Wars” that featured Grill ‘Em All, was filmed in Century Media’s parking lot!

Check it out! FYI – That’s yours truly in the smart looking hat with the Burger Conquest logo sticking out of it, like I am some kind of 1950s newsie.

Century Media Records took like in 1998 when German thrash metal front man, Robert Kampf, decided to self-release his band Despair’s first album. From their a legacy was born and the label has expanded into several territories bolstering the careers of metal stalwarts like Shadows Fall, Lacuna Coil, Stuck Mojo, Iced Earth, Unleashed, In This Moment, Samael, Eyehategod, Strapping Young Lad, Arch Enemy and many, many, many more of your favorite metal bands. 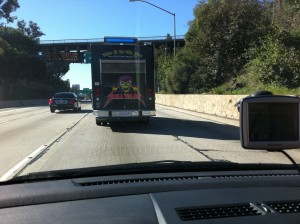 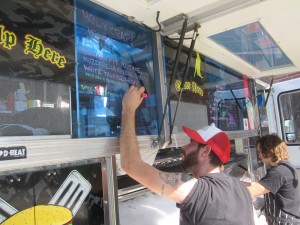 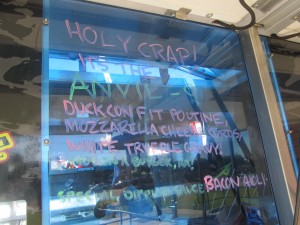 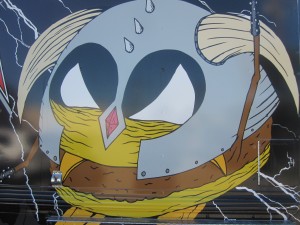 Seeing as how I gave you a tour of the Beast in my last post, I thought it was only fair and appropriate to give you a photo-graphical look into Son of Beast. Be sure to take notice of the service-necessary dashboard items. Recognize the CD? That’s from the super-mega-rad bad Holy Grail. They provided the theme music to the Grill ‘Em All “Victory Lap” show. 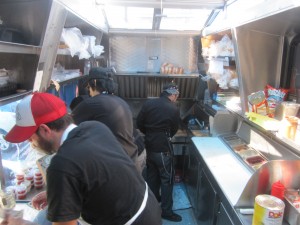 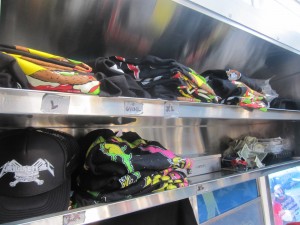 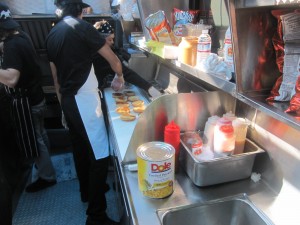 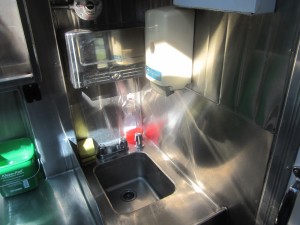 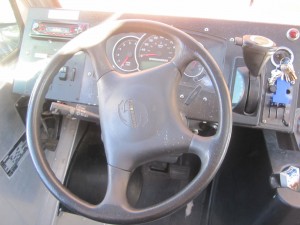 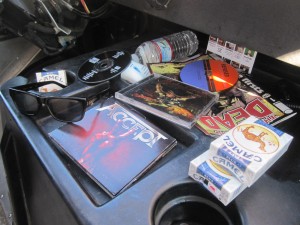 Holy Moses, no, Holy Grail!!! This is perhaps the most gourmet oriented and intense item served by any food truck on the streets. The preparation involved including acquiring the specialized ingredients are no small feat to concoct. If that doesn’t show that Ryan Harkins has earned the title of “Chef” no amount of 30 minute meal recipes or repetitions of the word “BAM!” will! How were they you ask? Deerrrrrr…AMAZING! The thick gravy is made only thicker by the melted cheese curds while the frites create a sturdy bed ala Huck Finn’s log raft. Are the cracklins necessary? Hell no and neither is the bacon aioli but why the hell not? Ghouls like it hard, heavy, intense and IN THE FACE!!

The Anvil is the Conan the Barbarian of French fries. Its Thick, dangerous, intense and brings about the lamentations of the women. Preparing to eat this requires war planning. 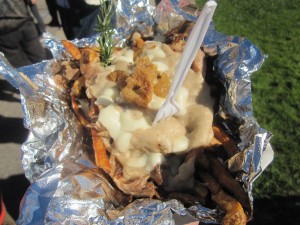 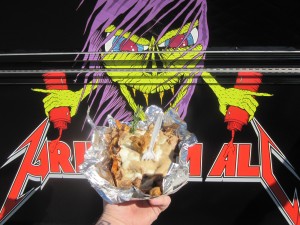 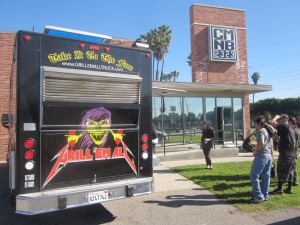 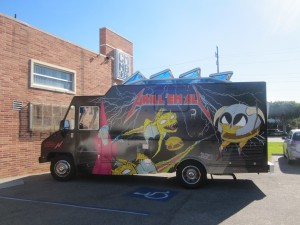 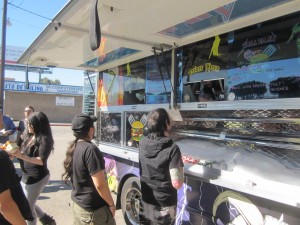 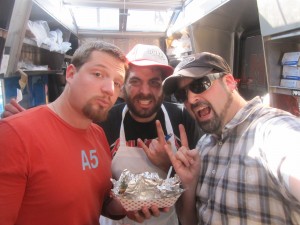