A Week In the Life of The Grill ‘Em All Truck
http://grillemalltruck.com
PART 4

I recently went out to LA to spend a full week in the burger trenches with Matt, Ryan and the rest of the Grill ‘Em All Truck staff, seeing what it’s like first hand to be a real Grill ‘Em All Ghoul.

If you’ve been following along like a good Ghoul, you’ve seen my photo-graphical tours of the Grill ‘Em All’s Beast and Son of Beast trucks as well as their regular gigs at The Other Door and Verdugo Bar. I’ve also given you a look at the commissary where the Beastie’s rest at night, where they buy their kitchen equipment and Century Media Records, the not so secret location where Grill ‘Em All shot the episode of “Food Wars.” In fact, you’ve kind of seen everything but the hole in the wall where the boys can see it all. Which in this case is, the Grill ‘Em All prep kitchen.

While there most certainly was a day and time when all prep happened right on board the Beast, with 2 trucks now on the road and the overwhelming demand for more and more tasty burgers, it just isn’t possible anymore. For Grill ‘Em All to be able to accommodate the needs of the burger obsessed, they have to prep at a kitchen. It ensures that not only they can serve more than enough food but also so the truck can be open quicker and putting good food into the hands of hungry ghouls.

So what does get done in the prep kitchen, well besides Anthony making funny faces? That’s where the Grill ‘Em All signature Grandma’s Mosh Pit BBQ sauce is made along with their chipotle ketchup and garlic aioli. It’s also where they cut the frites that will soon be double dipped and served underneath duck confit poutine with mozzarella cheese curds and white truffle gravy. As for those toppings, they were conceived in this prep kitchen. Kenny Smith’s bacon aioli dipping sauce? Also a product of having a professional kitchen where mixes can be made and re-made until they are just right and ready to serve. 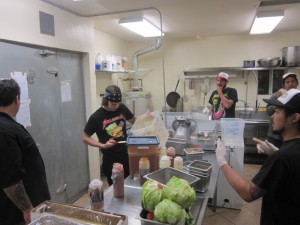 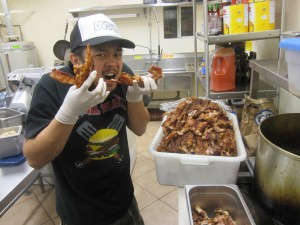 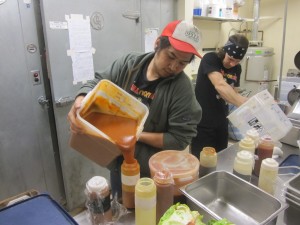 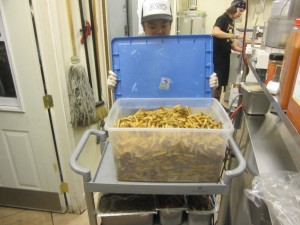 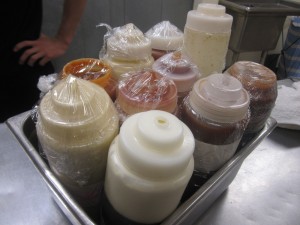 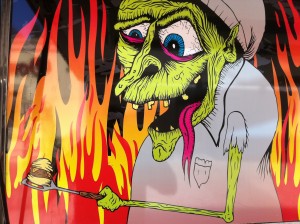 Once the frites are cut, the sauce bottles are filled, the veggies are prepped and the beast’s are gassed up, ready to serve, then what? It’s loading time. The trucks pull up to the prep kitchen are loaded with toppings, patties, buns, sodas, ice, water and of course Grill ‘Em All merchandise (which can also be ordered from their online store.) 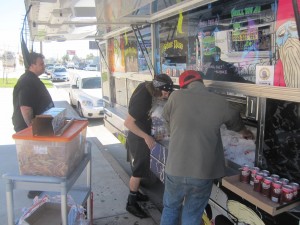 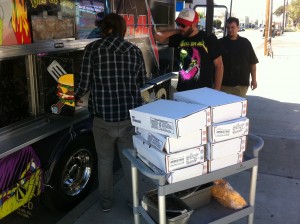 The Food Network’s “Great Food Truck Race” was a massive TV sensation that pit 7 food trucks in competition against each other in a cross country adventure to see which of them could sell the most food. In the final battle of the “Great Food Truck Race,” LA’s Nom Nom Truck, specializing in Vietnamese Banh-Mi sandwiches lost to the Grill ‘Em All Truck in the streets of NYC. Over the course of the 7 week shoot, the 2 trucks grew a lot of respect for one another and became great friends. When they finally returned to their mutual home of LA, they cleaned up, re-stocked and went out to roll a dual truck service aptly named; GRILL NOM ALL! 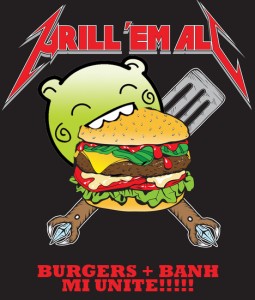 At this momentous food occasion, both trucks pull up to the same spot to serve their signature dishes. Unlike the TV show, there is now however NO competition. Just two of the most famous food trucks in the world selling good food to the people. On this Saturday in particular, the 2 trucks booked a spot at The Other Door in North Hollywood to put on the 4th edition of GRILL NOM ALL!!

An advantage to teaming up with The Other Door for such a raging event was the ability for both trucks to pair their food with drinks. For Grill ‘Em All’s burgers, they paired with The Other Door’s signature shot, The Grand Slam! It’s a double glass mixture of orange juice, Jameson and butterscotch liquor while the Nom Nom’s their Banh-Mi’s with Hitachino White Beer and the their iced tea with a habanero vodka shot.

The lines started up around 11 am, an hour before the event was to start and lasted throughout the entire service until the trucks had to close up shop at 5 pm. It was a long and exhausting, yet very exciting day with a ton of great food. 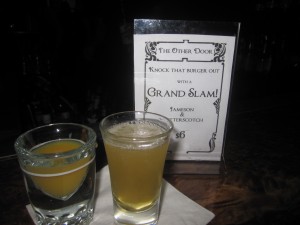 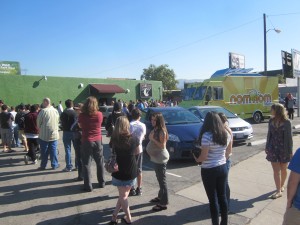 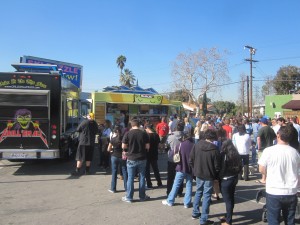 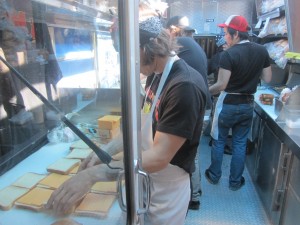 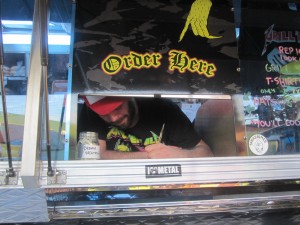 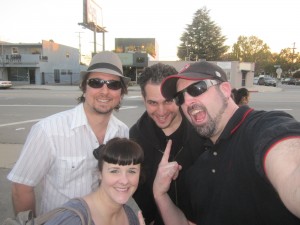 Get a 360 view of the madness and a little commentary from “the world’s most socially connected burger blogger” from this video:

But that’s not all!! With all the friendly vibes happening between Grill ‘Em All and the Nommers, the event was a total success. We had thrown out a couple ideas about having Chef Ryan and Jennifer from Nom Nom face off in a cooking competition or create some sort of food item. However, the difficulty of small cooking and prep space plus the never-ending line of hungry people prevented it from becoming a reality. That’s when I took matters into my own hands and created…

Yup. I did exactly what you think I did. I took a Nom Nom pork banh mi sandwich and combined with the Grill ‘Em All Truck’s famous Behemoth burger. Both sandwiches unto themselves are more than enough to feed a small family so I knew this was not going to be an easy challenge.

How to build your own BanHemoth

1. Get one of each sandwich from each truck.

Nom Nom Truck Pork Banh Mi – Bánh mì consists of a Vietnamese baguette made with both wheat and rice flour, with a layer of buttery mayonnaise, pâté, freshly sliced cucumber, jalapenos, topped with honey grilled pork,  along with thinly sliced pickled carrots and daikon (do chua), and fresh cilantro. 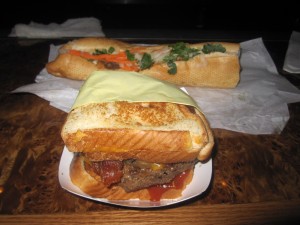 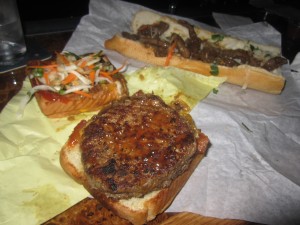 3. Place the Grill ‘Em All burger patty on top of the Banh Mi vegetables. Then take the honey grilled pork from the Banh Mi and carefully place it a top the burger patty. It’s a lot of food so go slow and place it carefully. 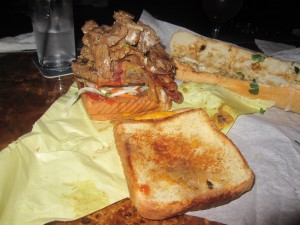 4. Take the other grilled cheese sandwich and place it on top of the entire thing. 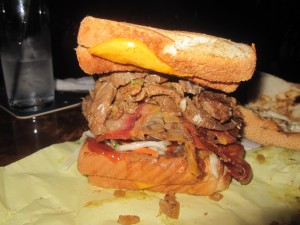 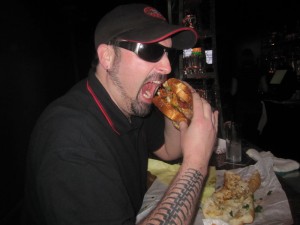 The Behemoth is a savory explosion of meat, cheese and bacon while the Banh Mi is a lighter and sweeter concoction. Together, the two flavor palettes created something absolutely amazing. What I thought really drew them together were the pickled jalapenos from the Nom Nom Banh Mi and the Grandma’s Mosh Pit BBQ from Grill ‘Em All. I almost would venture to say that deep fried jalapenos with BBQ dipping sauce could be it’s own side item! 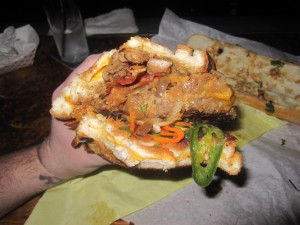 I won’t lie, this was a monster of a challenge but once I started, there was no stopping. There was no possible acceptable outcome other than to eat the entire BANHEMOTH. What made it just a little easier, not only are both sandwiches absolutely fantastic on their own but once combined, even more amazing. There was also the added pressure of being watched by Chef Ryan and Jennifer waiting to see what would happen. 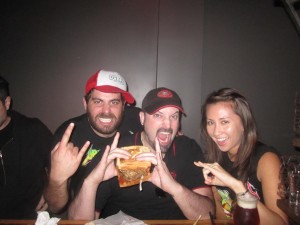 The Grill Nom All BanHemoth was truly one of the most fantastic, interesting, delicious and hardest to eat sandwiches I have ever had. I was off kilter for the rest of the evening, having trouble talking, walking and thinking but you know what, IT WAS TOTALLY WORTH IT. I would absolutely do it again but heavily suggest sharing it with a friend…or 7! 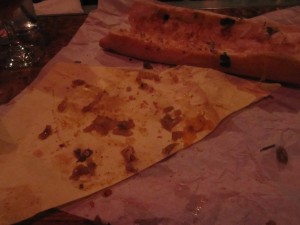