Diner – I Can’t Promise You Will Get This Burger

THE CONQUEST
Once you open a bar in Manhattan you end up befriending a lot of people in the industry. Your rolodex expands to include brand managers, distributors, other bar and restaurant owners, regulars and all kinds of people. As the person behind the craft beer menu at Idle Hands, I’ve become buddies with a lot of brewery reps and from time to time, there will be such a cool beer event at another bar, that they will invite you to come out. That’s how I ended up at Barcade’s East Coast vs West Coast event featuring Victory and Smuttynose vs. Ballast Point and Lagunitas and punk rock music from each corresponding coast. That’s also how I got a little sauced up and ended up with the munchies at Diner in Williamsburg.

The simply named “Diner” can be found at the base of the Williamsburg Bridge on the  Brooklyn side.  It’s a refurbished 1920’s dining car that’s been lovingly restored and filled with food from Marlow and Son’s Caroline Fidanza. It’s also filled late night with drunk and hungry, thrift-store dressed hipsters who may or may not be more interested in being scene than eating on tasty vittles. The eclectic and culinary adventurous menu changes daily and every morning, it’s hand written out on a long piece of register receipt paper. If you didn’t know, you wouldn’t go. If you don’t know, learn before you go. This place requires guess work, faith and a sense of adventure. The accommodating staff will walk you through it, if you can get a seat.

Thankfully for my grumbling belly, there was one empty stool right on the corner of the counter that was calling out my name.

THE BURGER
I thought the concept of the hand written menu was pretty cool and unique but in the case of Burger Conquest, it was almost pointless. Have a look, you won’t need a long one. 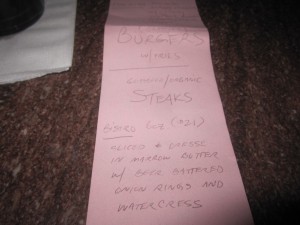 Had several of my friends not heavily recommend the Burger here to me, I might’ve been a little perplexed at a menu item that simply said “Burgers w/ Fries.” I thought to myself it must be that good if they don’t even feel the need to describe it! I settled myself into a beer and waited for the “Burger” to arrive, which actually was pretty quickly.

The Diner Burger is about as juicy as they come. After only a few bites, a large puddle of juice had begun to form from the drippings of the Beef. Tonight’s “Burger” was served in a crunchy and sweeter tasting Bun with pickled onions, lettuce and melted cheese. The rather thick patty makes for a large sandwich that for sure will fill you up, craft beer induced munchies or not! The pickled onions add a great taste the overall profile of the “Burger.” I strongly encourage you to dip the REALLY tasty, full-skin Mini Fires into the juices. Yeah, that’s a “win.”

So if I had to sum up the “Burger” at Diner with one word, I think it would have to be “good.” Beware of Hipsters. 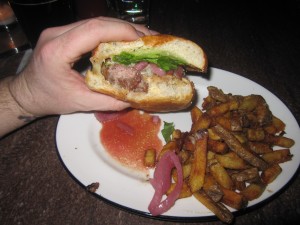 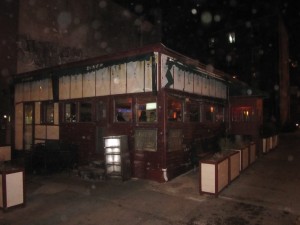 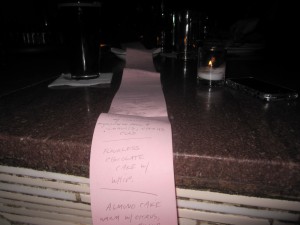 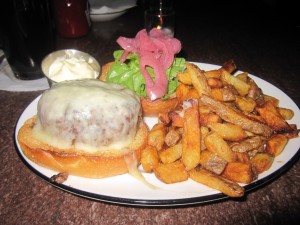