THE CONQUEST
The Burger Conquest request lines are open for business!!! Got a burger you want to tell us about or one you would like us to come try? Are you a publicist or food marketing professional? Drop a note to or add us to your promo list. beeftouchdown@burgerconquest.com We love hearing about the latest, greatest and tastiest burger news and restaurant openings. I promise you that unless you completely embarrass us, we will hold a Burger Conquest at your place and we will write about it.  If Burger King can remember to do it, so can you.

Just ask Ashley from AMP3 Public Relations. Ashley always lets us know when there is Burger worthy news from her clients out there in the Burgerverse. She recently hit me on the Burgerwire with this; “goodburger is the brain child of NYC restaurateur Tom Galis and with 6 locations across the island of Manhattan is considered by many to be the best inexpensive burger in the city.  goodburger has some exciting changes going on in the first half of 2011, including changes to the actual burger itself as well as plans to update the menu and overhaul the the overall look & feel of the restaurant.” (I’ve added the full press release at the bottom if you’re curious for more information.)

On this day in particular, I was sitting at my desk around lunchtime and started to get hungry for lunch. As I was in my email working, I came across Ashley’s email and the idea of a Burger Conquest popped into my head. Once I have a burger in my sites, there’s no stopping me from getting one. You’d have an easier time getting the US Government to let you take Air Force 1 on an all expenses paid, private trip around the world, with a custom catered galley by In-N-Out Burger. (If you do hook that, take me, I will post a story on the blog!) That being the case, my buddy Kenny who recently joined forces with our management company, wanted to have a biz chat with me and saw it as a perfect opportunity.  Kenny works with some amazing bands and is a really smart guy who I love talking business with. He also wanted a veggie burger so I thought it would make a great addition to the story!

Besides that, Burger Conquests are made for friends!

THE BURGER
The Union Square goodburger, their flagship location, is right across the park from Burger Conquest HQ, which made this even easier. As a cook and grill master at heart, I love watching my food being prepared at a restaurant. Give me a seat at the counter or in the kitchen and I’m as giddy as a 5 year Old’s birthday party.  After placing order, we placed our butts in stools at the counter and watched our lunch being made. The whole restaurant was very clean and the counter window made for an overall great presentation.

As soon as the burgers were done, our names were called and we had scrumptious vittles in our clutches. The prep window ensures you that your food isn’t sitting out on a counter getting cold while unconcerned wait staff chitchat instead of serving. You gotta like that. My burger was cooked right on the money to medium rare, which is something I consider a bit of a crapshoot at fast food style Burger Joints. Nice to see that goodburger makes it a priority.  The patties are char-grilled for that back yard flavor that our Dad’s raised us on. The grilled Onions added a nice sweet balance to the Burger’s mild tastes. Most places like this rely on a heap-top of salt to add flavor to the burger but not here. What you taste is the actual Meat, Veggies, and Condiments on Buns. Is the Burger better than the last time I had it? Definitely. It’s significantly less messy and less greasy, has better flavor, held together and had more natural Beef flavor. goodburger does lose points for one change though, they got rid of Coke Zero on tap.

What did Kenny think?
“Being a vegetarian, and occasionally a vegaquarian, I have to say that I’ll stick with the Crabby Pattie over the Veggie Burger when it comes to Goodburger.”

If you’re looking for a “good burger” on a quick lunch in the city, goodburger is a better and fresher option than any fast food joint out there. 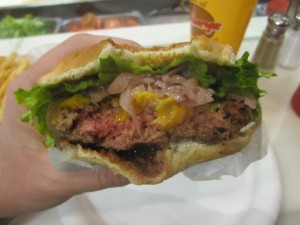 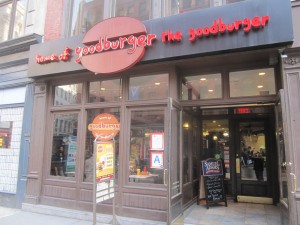 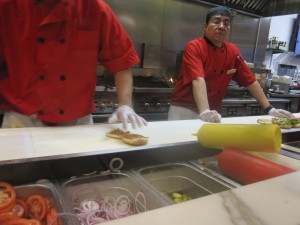 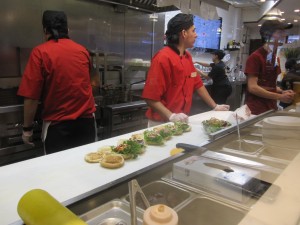 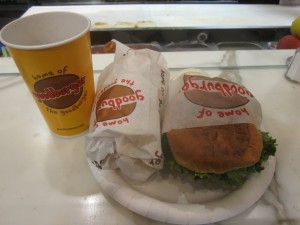 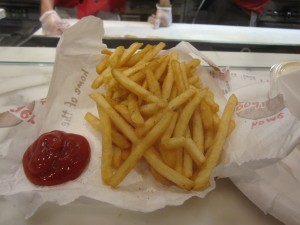 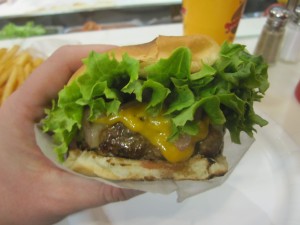 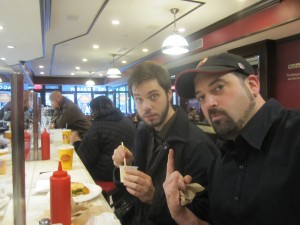 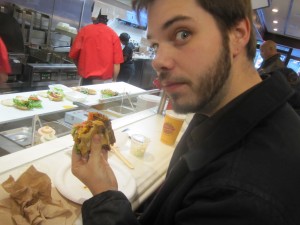 New York, NY— New York City restaurateur Tom Galis’s goodburger chain is one of the city’s favorite burger joints. His goodburger was recently voted one of the three best in New York City, but now he will be making a few changes to create, if possible, an even tastier goodburger with brighter and crisper green leaf lettuce, a thicker, juicier roma tomato, and a tastier bun. This is all part of goodburger’s ongoing mission to bring customers the best inexpensive burger in NYC, as well as other great, fresh foods.

So who is the man behind goodburger?  Aside from New York food industry insiders, few know Tom Gialamboukis (Tom Galis as he is popularly known.) Yet his is a quintessentially New York success story, rooted in every aspect of the city’s fast food and quality casual food business. And he, more than many realize, has played an important role in shaping the way that New Yorkers eat. In addition to being the proprietor of the popular and successful goodburger chain (yes, “Home of the Goodburger”), if you’ve eaten in a Café Metro, Oxford Café, Food Merchants or Food Exchange, chances are that it’s one that Tom Galis created. Tom has opened some thirty eating establishments in the city over the past dozen years; he named Fresh and Co., founded Crave Sandwiches, and recently brought Peter’s Since 1969 Rotisserie Chicken to Manhattan. Just to firmly establish his New York City street cred beyond any doubt, Tom got his start selling hot dogs from his family’s cart in Times Square.

With the launch of goodburger in 2005, Tom helped kick off the current frenzy of quality inexpensive burgers. The New York Times and others raved, and goodburger began a rapid expansion with a total of six restaurants now open in Manhattan. As he has developed and expanded his burger domain Tom Galis has maintained strong opinions about how to cook a great burger and how to run a great New York burger joint.

Tom may grind his own beef, but he doesn’t mince words when it comes to how a burger should be cooked. “Cooking on a open flame the way we do it at goodburger is the only way to get the best taste from a burger,” he says. “Plus it melts off fat that people don’t need to eat while allowing that fat to flavor and tenderize the burger. I just don’t get people who insist that griddle frying burgers adds flavor. Sure that adds fat, those burgers are cooking in puddles of fat, and that imparts a different greasy flavor, but it’s not proper beef flavor. Also, those mashed-on-the-grill burgers are too thin to be cooked to order the way we do. When you ask for ‘medium’ at goodburger, that’s what you get.”

Of course the primary reason for Tom Galis’s success with goodburger is the quality of the food and the thought he puts into presenting what he and many fans believe is not just a good burger, but the best inexpensive burger in New York City. Tom knows that it all starts with the ingredients and he sources, selects, butchers and grinds his Hereford beef at Pat La Frieda’s famous facility. All ingredients in his restaurants are as fresh as possible and everything is made to order: they don’t even own a microwave oven. The shakes are made the old fashioned way with real ice cream, and goodburger even makes its own root beer, and lemonade in-store, as well as good old-fashioned egg creams, Lime Rickey’s and Arnold Palmers.

Tom’s concern for offering foods that are of the highest quality, and prepared in the most intelligent way carries through goodburger’s entire menu. Their grilled chicken and turkey burgers are made only from fresh antibiotic-free Bell & Evans poultry. Their veggie burgers and crabby patties are made from fresh veggies and fresh crab. Tom even cooks his shoestring fries in 100% pure canola oil (and did so before it became law), and all the goodburger restaurants are green certified.

Goodburger is a truly New York City owned and operated business, it recently finished in third place in the Midtown Lunch poll of Best Hamburgers Under $10 in New York, behind only national chain, 5 Guys, and media darling Danny Meyer’s nationally-expanding Shake Shack. “We’ll stand out on taste, and we compete on price,” says Tom Galis, “and we think that will speak for itself. We intend to catch them and end up first next year!”

For more information about Tom Galis and goodburger please visit: www.goodburgerny.com.  For any press inquiries please contact Ashley Lutzker at AMP3 Public Relations via 646.827.9594 or goodburger@amp3pr.com.