The moment word of these super radical mosh-fest graciously paid for by the Scion car company hit my inbox, I immediately started to think of places where we could keep the metal Burger Conquest tradition alive. That’s right when the request came in. The Scion Rock Fest was asking the LA based, heavy-metal themed, gourmet Burger Truck and my business clients, Grill ‘Em All if they would like to provide the food for fest attendees.  “It’s funny how life imitates art,” or is “if you build it, they will come?” Either or, they both apply.

The story gets deeper. Not only did it make perfect sense for the trucks to be serving their head-banging brand of Burgers at this amazing festival but there was something bigger afoot here. One of the 4 stages at Scion was to be headlined by the band Municipal Waste. Their face-ripping brand of thrash was Chef Ryan’s inspiration when he created the Waste ‘Em All, a Burger topped with Green Chilies, Pepper Jack & Beer soaked Onions. As return gesture of Burger Appreciation, their drummer Dave Witte, perhaps one of the most talented and equally insane skinsmen in the world, offered to create a Burger for the Grill ‘Em All menu. Thus was born a Burger that matched Dave’s skill set and mental edge, the Witte; (pr. Wit-e) a Burger covered in Cream Cheese, deep fried Bacon, Beer & Sriracha soaked Onions & Malt Vinegar Aioli. It’s pure unadulterated Burger goodness gone mad and I guarantee you will love it. But the best part … Dave Witte has never eaten his own Burger from The Grill ‘Em All Truck!!! 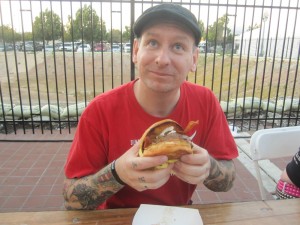 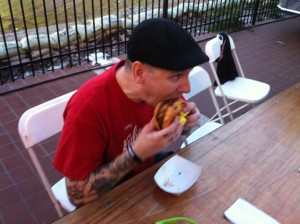 The man, the myth, the legend, the stretched polyester pounding maniac with a penchant for Burgers as crazed as his playing style, looked like a kid on Christmas Day morning discovering the Red Rider BB Gun that Santa Claus has brought as he plowed through his name-sake creation. It brought a little tear to my eye and at the same time made me a little jealous that I haven’t developed the musical skills that would earn me an item on the coveted Grill ‘Em All Burger menu.

The entire band joined Dave on for his triumphant moment of meta-Burger eating, each of them devouring a selection from the trucks. Later on that night, they went on to play one of the BEST sets I have ever seen them play. Was it the Burgers? Well, it’s a little too late to call in the medical examiners on that one but I don’t think there’s a soul that could completely refute the idea. 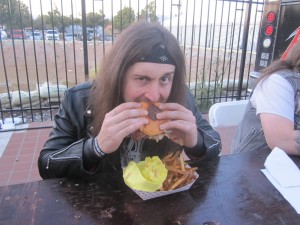 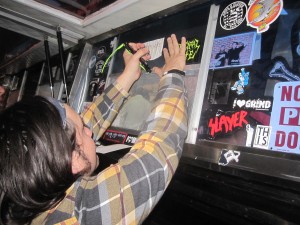 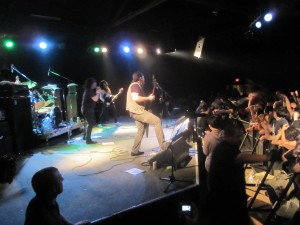 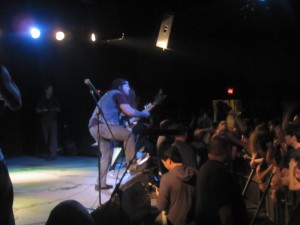 Their thrashtastic madness sent the entire Glasshouse into an hour long fit of headbanging, moshing and taking it to the face. You see, not only can the MW guys rip up some sick riffs and nasty mosh parts but they know how to keep it fun because life is supposed to be a good time. Fueled by rad Burgers and cold beers, there’s no way you could have a bad time at one of their shows. Just ask Chef Ryan who due to the electricity in the bar, lost control of his composure and took a wicked stage dive during the band’s set.

The entire event was a raging good time out in the California sunshine with a ton of excellent bands including one of my favorite performances of the show, Primate. This grinding speed beast features the talents of vocalist Kevin Sharp from Brutal Truth and Bill Kelliher from Mastodon. They played in the tent directly behind Grill ‘Em All’s Son of Beast so we all took a moment away from the trucks to enjoy their face-ripping brutality. 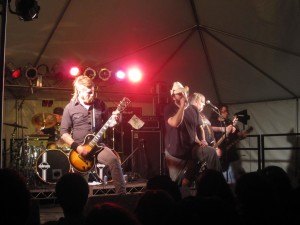 But then it was right back to the trucks where the hordes of hungry headbangers who were looking to grow their bodies with Grill ‘Em All Burgers were not letting up. 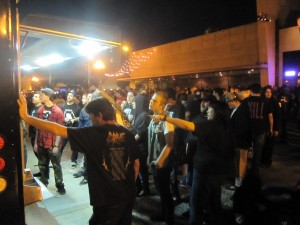 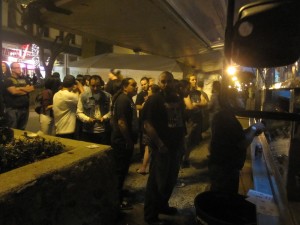 THE BURGER
As if the great music, great food, great weather and great people were not a reason enough to partake in the Scion Rock Fest there was still the business of my yearly Scion Rock Fest Heavy Metal Burger Conquest. For 2011, it was the Grill ‘Em All Truck and the debut of their latest special, the Altar of Madness Burger. Created just in time for the event, this insane creation comes topped with Duck Confit, Bourbon Soaked Cashews, Goat Cheese & Macerated Cherries. While the name certainly applies to a sandwich of such creative magnitude, it has a deeper meaning. It was named after one of the Scion Rock Fest’s headlining bands, Morbid Angel and their album “Altars of Madness.” Matt and Ryan seemed to think it was a perfect fit as in “works together” not just “confit!”

This Burger, much like the music of Morbid Angel, is no easy pill to swallow. Only a true connoisseur of Burgerific insanity should attempt to master this creation. Chef Ryan loves to feed you and feed you a lot, just like the good Midwestern boy that he is and as such, the Altar of Madness is for sure a two-handed beast. Be sure to strap on a seat belt and stock up napkins before you pray to its madness. With the finest of buns from Wheatland Baking and a fantastic fresh ground Beef Patty from Rocker Brothers, the Grill ‘Em All Burger doesn’t even really need toppings to make it great but that is where the genius lies. Chef Ryan and Kenny Smith spend hours in the prep kitchen hand making the Duck Confit, which is no easy matter. By cooking down the Duck in it’s own fat, it creates what is actually considered to be a preservative, that has amazing tastes that come from the natural oils in the meat combined with a special selection of spices. Upping the challenge from their, they take batches of Cashews and sautée them in Bourbon, Butter, Brown Sugar, Salt and Pepper. The process adds a unique flavor to the buttery taste of a Cashew but also softens their texture. Add in the intense creaminess of Goat Cheese and the sour meets sweet sensation of macerated Cherries and you have a Burger that truly lives up to a name like “Altar of Madness.” 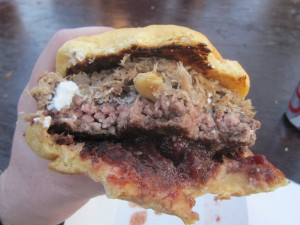 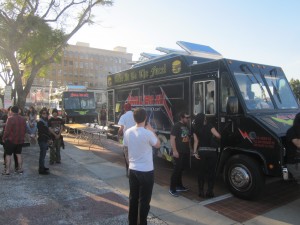 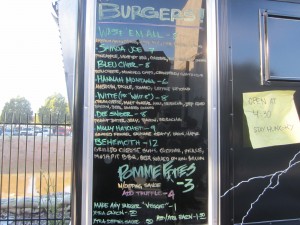 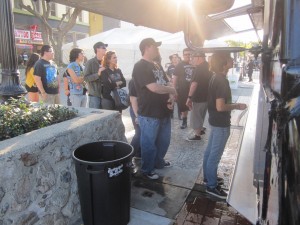 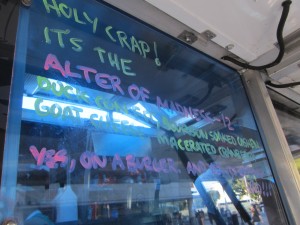 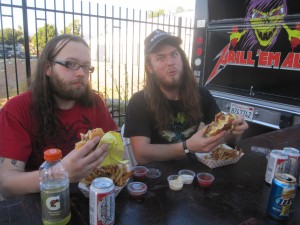 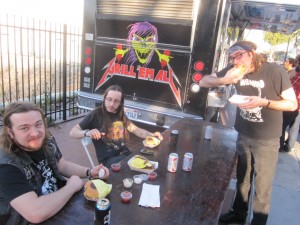 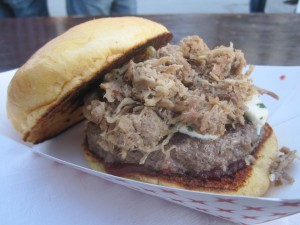 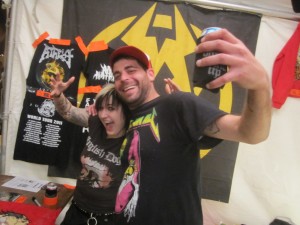 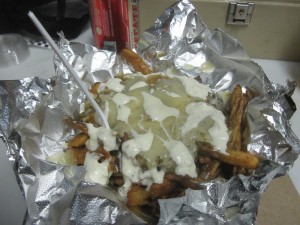