Laurel Tavern – Over The Hills and Marrow Away

THE CONQUEST
As a proud resident of New York City, it’s a tough swallow to admit that Los Angeles just might be the premier Burger town. The Big Apple is the best city in the world with 5 distinctly different boroughs, a vast array of cultural influences and more awesome choices for local business than any other town. LA has smog, traffic, attitude, Hollyweird and a downtown area that people generally avoid as if that is where the zombie apocalypse had taken part. My patience for the place has a 3-5 day time limit that is usually measured by the amount of traffic I have sit in.

But as Burger Fanatic, it would be entirely unfair and untrue for me to stand behind the premise that the City of Angels had inferior Burgers. Truth told, it has not only some of the best burgers I have had, but also some of the most diverse. In fact, the cornucopia of LA Burgers is pretty damn special and ALMOST makes the town tolerable. Burger lovers will sing the praises with me for Father’s Office, The Apple Pan, 25 Degrees, Pie and Burger, 8 oz Burger Bar, Irv’s Burgers, The Counter and of course, the Grill ‘Em All Truck. If your a Burger Junkie like me, LA is a great town to get your Burger fix on. It’s also a great town when you know people like my pals Jackie, Tom and Brad who are way down to crush Burgs when The Rev arrives in town. On this trip in particular, Tom suggested we meet up at the Laurel Tavern.

In the worked beyond LA, just North of the Laurel Canyon, is a part of town that’s easily forgotten by the Hollywood types called “the Valley.” It houses towns like Burbank, Sherman and Oaks and their Hollywood connector piece, Studio City. For people who want to be near “it” but not in “it,” the Valley offers proximity, affordability, a more suburban experience and The Laurel Tavern. This brick and wood decorated gastropub is pleasing pallets in a space that formerly housed the lounge known as Sapphire. It has a good selection of interesting American-made craft beers and a concise menu that offers Burgers, Grilled Cheese Sandwiches, House Made Pickles and a few other savory vittles. Owners Will Shamlian and Mark Leddy, also known for Library Bar in Downtown and Silver Lake’s 4300 bar are trying to give you a great pub experience that’s tasty and without pretense. They’ve created quite the buzz around their Burger selection and that’s all the reasons a couple of Burger buds need to venture forth. Grab a seat, a beer and a menu and when you are ready, place your order at the counter.

THE BURGER
After a couple micro brews and some chit chat, that’s exactly what we did. Nothing says “it’s great to see you” like sharing an appetizer of Pork Belly Skewers because that’s what real friends do, share. The smoky and salty selection has a unique taste combo of great rib meat atop of fatty bacon. There’s an underlying sweetness that pulls it all together and makes it a must-share. Sprinkle on a little Lime if you want to add a 3rd sensation of sour to tickle your tongue.

Read through a couple of the reviews and stories on this site and you’ll realize something is missing…Vegetables. Well, other than a Potato or a Salad, it’s just not that often that they are offered along side of Hamburgers. Well, that’s at least the excuse I am going to give you as to why I really don’t eat too many of them, a lack of access. But contrary to popular belief, I do like them and every once in awhile you come across a Burger spot that has interesting Vegetable plates. At the Laurel Tavern they have a whole roasted Artichoke that is almost as overwhelming to look at as it is to eat! Chew on the outer leaves, scrape the backs of the inner leafs and dig into the heart because this whole thing is delicious.

If you’re an LA Burgermeister you’re all too familiar with the concept of Hickory Sauce. It’s been made more than famous by a number of Burger joints, most notably The Apple Pan. For those not “cool enough” to be in the LA-Burger knowledge base, Hickory sauce is simply a smoky BBQ sauce / ketchup hybrid and when it’s done right, it’s fantastic a top a Burger. In a show of local loyalty and Burger tradition, The Laurel Tavern offers up a Hickory Burger and when I saw it on the menu, there was no need for further menu inspection. Served on a study bun, it also comes with grilled onions and lettuce. The Beef in the patty has a great real-beef taste that screams of quality cuts of Meat brought out by the deep char cooking. The reason we love backyard BBQ Burgers is the char flavor a grill gives adds to the profile and the Laurel Tavern Burger has a whole bunch of it. A really, really tasty and savory Burger indeed but my only one wish was that it had more Hickory Sauce. Respectfully, the Chef is clearly trying to let the Beef dominate the tastes here so my opinion is really only based on the fact that I had Hickory Sauce on the brain.

Willing to go out on a food limb? Put in an order for the Laurel Tavern Roast Marrowbones. It’s a rather simple dish made from literally roasted the marrow inside a bone and adding parsley on the side. Regardless of it’s short instructions, it’s not that easy to actually make correctly and hence part of the reason its considered a serious foodie delicacy.  Done correctly, it’s served bubbling hot and then spread onto crostini with a sprinkle of the parsley. It’s a bold move to order and and even bolder move to offer it. Thankfully the Laurel Tavern knows how to do it just right. The scent of this extremely salty dish is practically mesmerizing. Don’t be a wuss, order some up and dig right in, you didn’t come over to the valley for no reason.

While I hate LA, I do love it’s Burgers and moreover, the reason they give me to hang with my friends at great places like the Laurel Tavern. 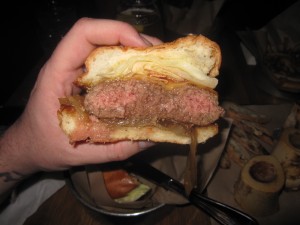 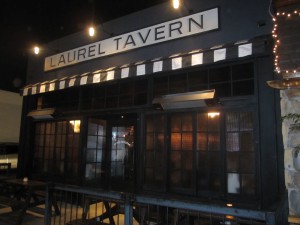 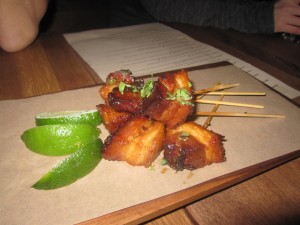 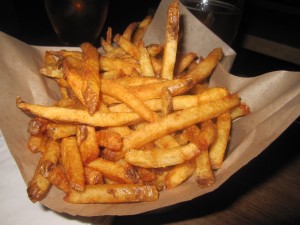 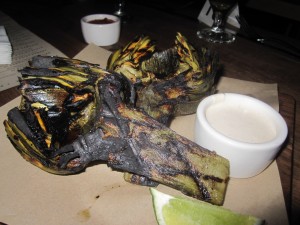 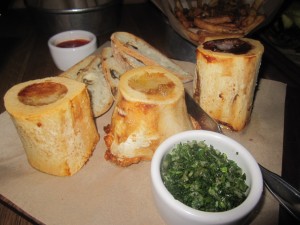 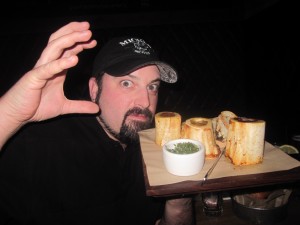 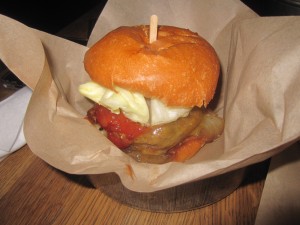 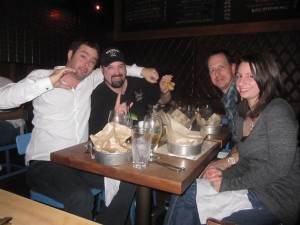