Second Bar + Kitchen – What You Should Eat During SXSW

THE CONQUEST
SXSW, four letters that 35,000 plus people who attended it know exactly what it stands for; South By Southwest. It’s a 10 day music, film and technology conference that happens every mid-March in Austin, TX. Celebrating its 26th year, SXSW is a fantastic opportunity to network, learn about new media, see a whole mess of emerging and established bands and eat great food all while getting out of the dreary NYC cold weather to enjoy what is also known as “Spring  Break for the Music Business.”

2011 marks my 14th SXSW in a row. I got my very first tattoo at my very first SXSW. After taking my first steps on 6th Street, the main drag in Austin which serves as the center point for showcases and parties, I knew I had finally found the right place to get my first ink. Along with some friends, I’ve also started a yearly day party at Emo’s, the famous rock club, called Full Metal Texas that brings together some of the best new talent in the world of heavy metal and hardcore. I’m also the man behind the yearly Record Breaking Flaming Dr. Pepper Happy Hour. It’s a tradition of gathering every Friday of SXSW to see how many Flaming Doctor Pepper’s we can drink in one hour. It takes place at the bar that invented the drink, Touche. We have re-broken the record every single year!!

I absolutely love going to SXSW for every reason listed above and also because of all the great food in Austin. With so much to do, sitting down for a proper meal hardly ever happens and when it does, it’s usually due to a meeting or a party. You end up eating a lot of street food, quick bites, buffets and limited offering menus and while it’s all usually pretty good, that regular old restaurant experience is pretty limited. Thankfully my good friend Julie from 365+ Media took me to meet her boyfriend, Chef Ethan Holmes of Second Bar + Kitchen, because it resulted in one of the best sit down meals I have ever had in during SXSW.

Second Bar + Kitchen is the latest off shoot of Congress, the popular fine dining restaurant located in downtown Austin, TX. It’s a more casual experience that could best be described as an elevated gastropub. Their inventive menu includes small plates, locally sourced products, seasonal delights and interesting selection of craft beers, wines and cocktails. Whether your up for a locally made board of Cheese, Pulled Pork Sandwich, Pizza Bianco or Wild Arugula Salad, you’re guaranteed to find something interesting and delicious. Grab a seat at the bar or at a table, in or out of doors and get ready for one of the most approachable yet artisan meals in Central Texas. Executive Chef David Bull and his team will leave you wanting to come back for more.

It provided the perfect back drop for a dinner meeting I had with my friend Frank who is a very talented and well respected producer manager.

THE BURGER
My only real intention was to chomp down on the Congress Burger, Chef Ethan wasn’t going to let us escape without a custom designed culinary wild ride. We started off with Buffalo Fried Pickles with Bull’s Hot Sauce and Gorgonzola Cheese. I’m not much of a Pickle fan, in fact I kind of hate them but Ethan was so excited that I had to give them a go. While there was no conversion of my palette, my opinion remains the same on Pickles, I will tell you that they were damn good. So good that I peeled the breading off the rest of one just so I could keep enjoying them. I’d love to see how this breading and sauce tasted if it was prepared with Hot Wings or Chicken Fingers.

Following up the fermented Cucumbers was an appetizer that on name alone will have you salivating; Avocado Fundido. Second Bar + Kitchen tops freshly picked and creamy Avocado with baked Queso Fresco & House Chorizo, serving it with Chipotle Masa Chips for dipping. Yeah, it tastes as good as it sounds! Move over Guacamole, you’ve been ousted as the mayor of appetizers on Foodsquare!

While both of these items were quite fantastic and I would never sway you away from ordering them, know that the next item we ordered is the one I would consider a MUST; Pepperoni Soup. Imagine all the toppings of a Pizzza, served in a soup bowl and covered with baked Mozzarella ala Swiss Cheese on French Onion Soup served with Garlic Croutons for dipping. It’s essentially a slice of Pizza but served in a very unique way. Second Bar + Kitchen uses the Holy Grail of Tomatoes, San Marzano, to make this incredibly delicious and amazing dish.

It’s easy to ruin your meal with all these amazing appetizers but once you read about this, you’ll think twice before doing it, the Congress Burger. The patty is made from house ground Brisket and Chuck and topped with Shallot Confit, Gruyere, Greens & Horseradish Pickles. While I would consider using the word “Confit” in this situation a bit of an artistic liberty, much like me, you won’t care once you take a bite. The sweetness of the Shallots reduced into a savory sandwich such as this is pure taste bud bliss. The flavors only get more complex by adding the slightly salty aged qualities of a hard Cheese like Gruyere and the juicy fresh mix of locally sourced Beef. The patty could’ve been served on it’s own and still be awesome but it’s sandwich counter parts make this one of the best Burgers I have ever had!

While we both sat completely blown away by the awesome Burg we just crushed, I exclaimed to Frank that Second Bar + Kitchen was definitely going to be added to my BEST OUTSIDE NYC list of Burgers. Frank agreed it was a damn fine selection and that’s when Ethan pulled out one more trick from the kitchen. Suddenly we were staring down a plate of Chocolate Sticky Toffee Pudding topped with Bacon Ice Cream and a Chocolate Toffee Sauce. Given the choice, I’d rather have more of something salty in my meal than a dessert but this dish might make me reconsider my opinion. It’s as good as it sounds with enough wacky elements to please any type of food palette.

Do yourself a favor and if you attended SXSW but missed out on this amazing Burger either book a flight right now or be sure to add it to your agenda in 2012. (Along with Full Metal Texas and The Flaming Dr. Pepper Happy Hour!) 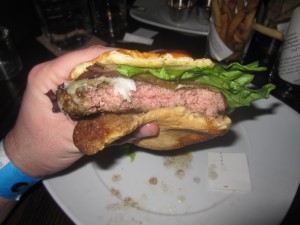 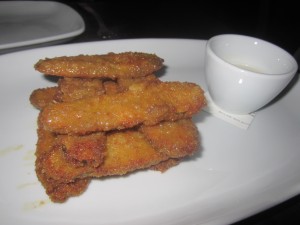 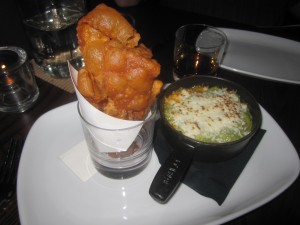 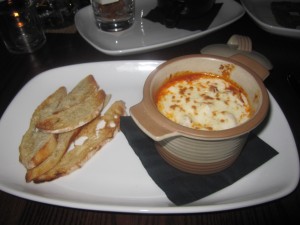 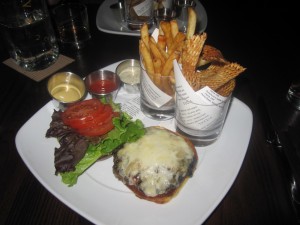 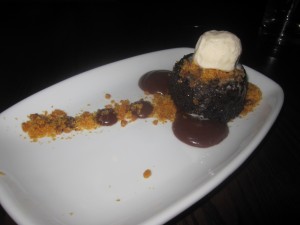 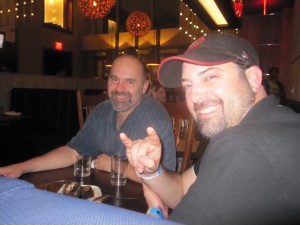