THE CONQUEST
When I sent an email to the Grill ‘Em All guys on December 2nd of 2009 to tell them how excited I was to learn of their business, I had nothing in mind other than a simple introduction and a plan to eat their Burgers. I had no idea I would end being such good friends with owners Matt Chernus and Ryan Harkins. I also had no inclination that one day I would be brought on board as their business manager and I certainly wouldn’t have even imagined that I would end up on the Travel Channel and Food Network just because I enjoyed their AMAZING food.

Well, the surprises keep on coming. The Food Network (Canada) & The Cooking Channel have teamed up to create an all new TV show entitled “Eat Street.” The basic concept is to show the world that the Chefs behind gourmet food trucks, shacks, carts and the like are just as a creative, determined and innovative as the top named Chefs at highly regard top noted restaurants. Great food can be found anywhere and if you watch No Reservations with Anthony Bourdain, it’s been drilled into your head that local street food is where the heart of culinary movements exists. “Eat Street” aims to take the camera out to the culinary geniuses out there banging out gourmet food in the most nontraditional of places, including, Grill ‘Em All!

The day started off at their prep kitchen when Chef Ryan, Kenny Smith and the rest of the crew do the heavily lifting of the Grill ‘Em All menu. Ryan walked the crew through the creation of his DELICIOUS Beer Soaked Onions. For those who don’t have the patience to wait for the TV show, watch episode #4 of the Grill ‘Em All “Victory Lap” where Chef Ryan demonstrated how to make them at Whisk in Brooklyn. 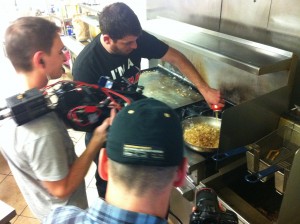 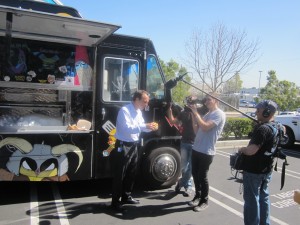 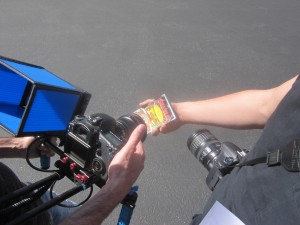 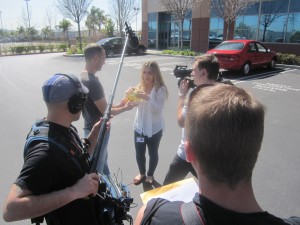 From there we loaded up the Son of Beast and headed out to do a regular lunch service. The crew interviewed a bunch of Ghouls who came out to crush Burgers and even shot a little piece about the Ghoul’s School Fan Club! Congrats fellow Ghouls, you’re Burger Famous! On each stop of the show, the production crew picks out a local expert to be interviewed about the food. For the Grill ‘Em All Truck they selected Zack who is more commonly known as “The Unvegan.” Zack documents his meat-centric quests through the “People for the Ethical Eatment of Animals” on his website. Turns out that the love of Meat and Burgers is not the only The Unvegan and I have in common, he too is a native Detroiter. After much “I think we’re about to be best food friends forever” talks, the camera crew called us over to chow down in front of the lens.

THE BURGER
Zack, another Ghoul and I took it upon ourselves to take on a Molly Hatchet, a Behemoth, and a Waste ‘Em All, respectively. I crushed my Waste ‘Em All on camera with all the passion and fury that Municipal Waste brings to their stage show, earning their namesake on a Grill ‘Em All Burger. The new TV series is set to air early Spring with the Grill ‘Em All episode featuring Burger Conquest and the Unvegan somewhere closer to summer. Stay tuned to the Burger Conquest Twitter and Facebook pages for updates on our Burger Fame. In the meantime…

TAKE IT TO THE FACE! 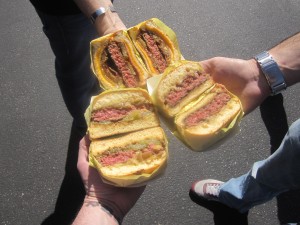 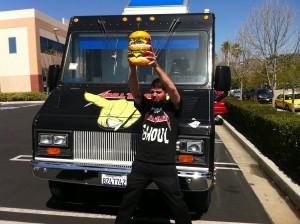 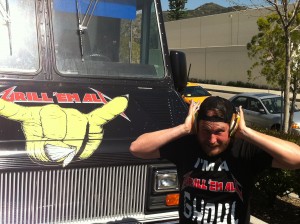 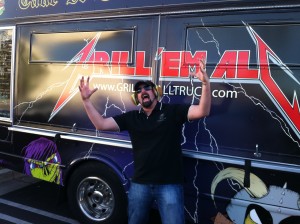 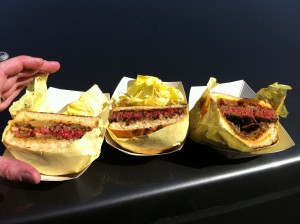 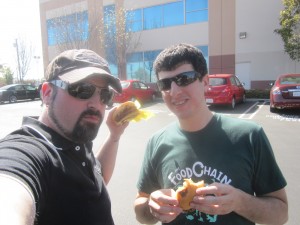