The Jackalope – Dances With Wolves, Burgers and Portugal. The Man

THE CONQUEST
A wise man in a hat once said  “tatonka” but that’s not the Kevin Costner movie that has any bearing on this story. No, it was “Field of Dreams” in which the words were coined “If You Build It, They Will Come.” He may have been talking about baseball but the rule applies to conferences, bands and burgers too.  With more than 35,000 in attendance at this year’s SXSW conference in Austin, TX, it’s a true example of what can happen in the 24th year of building a fantastic event that draws an audience from all over the world.

With 3 successful years behind Full Metal Texas, an event during SXSW that showcases the best in emerging and established heavy metal acts, that my friend Marc and I put together, it’s easy to show another example of building = coming. The same applies to my Record Breaking Flaming Dr. Pepper Happy Hour. It’s a yearly happy hour that takes place at Touche from 6:30 – 7:30 pm on the Friday of SXSW where a group of us try to break the record for the most amount Flaming Dr. Peppers in an entire evening … in less than 60 minutes. We’re 7 years in and have yet to be bested by the previous year’s record. Click here to see photos, videos and RSVP for 2012.

Truly a fan of tradition, for the last 2 years I’ve held an annual SXSW Burger Conquest, the first at Casino El Camino and the second in 2010 at Dirty Martin’s.  As I started to plan the 3rd, my good friends Catharine and Ashley, who happen to be publicists at Atlantic Records, asked me if I would like to take their band Portugal. The Man out on this years Conquest. I would’ve said yes no matter what because I love the band but when Catharine told “one of the members is nicknamed ‘Hammburger’,” how could I possibly deny?

Portugal. The Man have the unique quality of being from 2 places at once. Some of the members hail from the Beervana known as Portland, OR, where they live now while other members grew up in Wasilla, Alaska. With BLANK albums in their catalog, they are currently out on tour building it like Costner’s field, in support of their latest album “The Satanic Satanist.” The album is a whirlwind of sound played through a cornucopia of instruments all tied into a true soul music gone bluesy rock filter. In a sea of music that all just sounds like assembly line manufactured pro-tools cut, copy and pasting, Portugal. The Man are crafting music that is equally innovative and with a penchant for tradition song writing. So with that in mind, I had to pick a Burger spot that could match their creativity.

The Jackalope, a long running staple of the SXSW landscape is located right smackdab in the middle of all the activity on 6th Street. The “notoriously old school dive bar,” is known for 2 things, good rock and roll and a variety of great Hamburgers. Just past the entrance you’ll find a gigantic Jackalope that you are more than welcome to mount and ride like a static carousel that will only lead you to music and food. But just beyond the silly looking monstrosity is a bunch of tables a horseshoe shaped bar standing in between their backyard smoking patio and live music stage. It’s absolutely common place to see people crushing on Burgs while some punk band is wildly attacking their instruments on the stage.

While offering all sorts of sandwiches, salads and other bar foods, the Jackalope is primarily known for it’s weird Burger and Frank selections. Whether you’re less adventurous and opt for The Jack Basic with Lettuce, Onion, Tomato, Pickle or Mayo or are daring enough to order The Yucatan, a Burger outfitted with slow smoked Pulled Pork, Jack Cheese and Pineapple Pico, they have something for all walks of the rock. In typical “everything is bigger in Texas” style, Burgers come in 2 sizes; Big and Huge.

THE BURGER
After much confusion due to too many choices, we all finally buckled in and placed our orders. The band and I had a chance to play the “get-to-know-me-game” all of which seemed to conversationally circle back to our mutual obsession for the Hamburger, a staple of the rock and roll touring universe.  As we were on the early side of a SXSW Friday, no bands had started playing by the time the food arrived giving us all a chance to compare food notes and bites.

I was torn between ordering The Matamoros, a Flame-grilled burger topped with seasoned Taco Beef , Cheddar Cheese, Guacamole, Lettuce and Jalapenos and the Frito Pie Burger, which comes with “Butt kickin’” home made Chili, Fritos, Cheese & Chopped Red Onion. Our server suggested the former and Ashley offered to get the latter so we could try them both. (Revitor’s note, Ashley rules.) Taking one look as the Burger-Taco hybrid placed in front of me, I muttered out the following, “this is going to be at least a 5, maybe 6 napkin sandwich!”    Austin, TX is known for great BBQ and great Tex-Mex so I was excited to see what happened when the two joined in culinary unison.

Be sure to fasten your seatbelt before taking a ride on a Burger at this house of Mythical Creatures. As advertised, the patty’s were flame-grilled, giving them that great backyard BBQ taste. They’re made from fresh, never frozen ground beef that is hand-formed and due to Texas laws, cooked to a Medium temperature unless otherwise requested. If you’re like me and desire Medium Rare, there is a little Texas government wag of the finger on the menu that states “consuming undercooked meat may increase the chance of food born illness.” I was dying to write in “as well having an awesome tasting Burger!” Served on a Buttered and Toasted Bun, all of the Jackalope Burgers start from a position of quality. As for the Matamoros, all of the ingredients tasted great, especially the Seasoned Taco Beef but the proportions were all out of line for what I had been hoping to eat. There was very little Taco meat covered in a massive globule of Guacamole and in fact, I would more say this was like a Guacamole covered Burger than a Taco covered Burger. Realize that my opinion here was jaded by hope and not by the quality of the ingredients, all of which were fresh and flavorful.

On the other hand, Ashely’s Frito Pie Burger, now that was exactly as advertised, “Butt Kickin’!” The Spicy Frito Pie balanced against the sweetness of the Red Onions and saltiness of the Cheese just made the natural beef flavors in the Burger do a little Texas style boot-scootin happy dance. I was truly jealous. Feeling bad, which wasn’t necessary, the Portugals let me try one of their Bacon and Brie Burgers which was totally awesome and unique, which of course, is what they ended up ordering.

As the meal was coming to an end, the band leaned over and said “Rev, this is the one thing our press schedule we were most looking for and it was awesome.”

Of all the artists performing at SXSW that I could’ve broke Burger with, let the following note from Zach “Hammburger” Carothers, bassist, Portugal. The Man, tell you why I there were none more appropriate.

It’s been a long time, old friend. I have fond memories of meeting you in the spring of 2006 at the Jackalope in Austin, Texas. You were my first meal in that amazing city, and you kept me going through our first experience of the beautiful chaos that is SXSW. I was so excited to reconnect with you this year!  It was early Friday afternoon when we met with Dave Ciancio AKA The Rev, from Burger Conquest. We hit it off immediately due to our shared love of the sandwich and his idea to lunch at your establishment. We chatted at length and reminisced of great times with others of your kind. It was his first time dining there, and he seemed very impressed. As a matter of fact, our entire table of 11 was in bliss. With so many options on the menu, our table was filled with different and interesting burgers. Although I could never forget you from several years ago, I could hardly recognize you. I ordered you medium rare, piled high with bacon and smothered in brie. You, my friend, were savory and delicious. Flavors I have never had the pleasure of tasting on a burger. I have missed you and will continue to do so until our next visit to Austin. I won’t forget you. 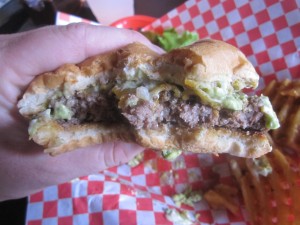 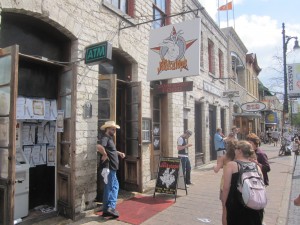 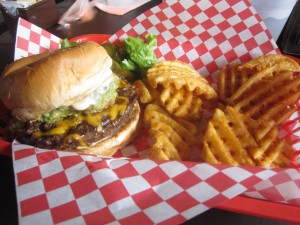 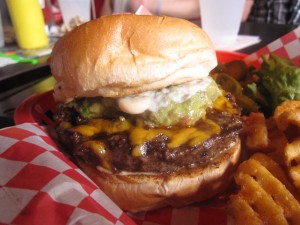 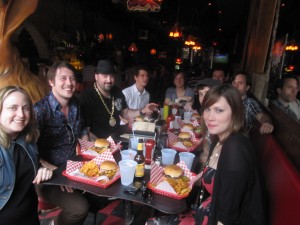 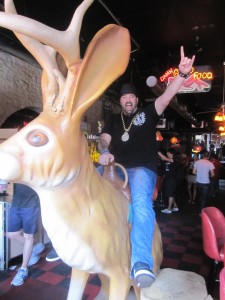 6 Responses to The Jackalope – Dances With Wolves, Burgers and Portugal. The Man