THE CONQUEST
There’s an area of Manhattan that I like to call the “EVILL.” It starts South of 14th Street, is East of Broadway, North of Houston and extends to the East River. It’s more commonly known as the East Village and includes Alphabet City but I prefer “EVILL.” It’s one of the most lively neighborhoods boasting some of the interesting bars, restaurants and shops in the city. While it isn’t devoid of larger corporate chains, it certain has a lot of great Mom and Pop style businesses, including my bar, Idle Hands. (Wink wink).

It’s a great neighborhood to be associated with and with the rise of websites like NearSay and their East Village section, it’s becoming a tighter knit community every day. It’s a neighborhood where bars and restaurants are happy to team up for fun events like Thrillist’s East Village “EVILL” Craft Beer Crawl, a spectacular event that brought hundreds of people into our neighborhood to get a great sampling of what 11 bars and restaurants have to offer New York.

The EVILL is also the home to the Fourth Arts Block (FAB); “a non-profit organization founded in 2001 by cultural and community groups to establish and advance the East 4th Street Cultural District, between 2nd Avenue and Bowery.” They’re a fantastic organization who have made it their duty to help keep arts and culture alive in our neighborhood. They are also the folks behind the East Village Eats Tasting Tour, an amazing event which brings together some of the best bars and restaurants to create a walking & tasting tour of the EVILL. The last event which took place in October of 2010 was a huge success and plans have begun for another one to happen soon. In fact, the fine folks at FAB have asked Idle Hands Bar, Burger Conquest and Yeah! Management, to be involved and that was met with a resounding “YES!” We’ll be joining forces with them as well as Food Karma and Jimmy’s No. 43 to bring you the 2011 edition of the East Village Eats Tasting Tour.

If you’re a beer and or food nerd, there is no where you should have on your “to do” list above Jimmy’s No. 43. This gastropub can be found on 7th Street between the Bowery and 2nd Street. It’s downstairs in a space that looks like a medieval wine cask storage and dungeon. Once you’ve settled up to the bar or one of many wooden tables in the 3 rooms that make up Jimmy’s you’ll find a rotating beer list that is far from the norm. Jimmy himself has a wide appreciation of craft beers from around the world so expect to see everything from a Scotch Ale to American Pilsner to a French Sour or a Belgian Abbey and everything in between and beyond. But the happy mouthing doesn’t stop there. The food menu at Jimmy’s No. 43 is an ever changing selection of seasonal Meats, Sausages, Breads and Veggies, most of which are sourced from local farms and as organic as possible. Fans of the unique establishment also enjoy Oyster nights, Brisket Cook-Offs, Duck Dinners, Craft Beer tastings, Whole Hog participation and all sorts of foodie and beer nerd oriented Nirvana.

It’s also the location where we all met up to discuss the East Village Eats Tasting Tour, of course, while eating a Burger.

THE BURGER
The Burger at Jimmy’s No. 43, thankfully for my Glorious Pursuit of Delicious Burgers, is a menu main stay. It’s a Grass-fed Beef Burger from Dickson Farmstand with Horseradish Crème Fraiche and Greens.  The Dickson Farmstand describes themselves as “a purveyor of a unique selection of artisanal meat and meat products. Our beef, lamb, pork, goat and poultry are sourcedfrom local farms , hand-picked because of their commitment to producing natural, humanely-raised, high-quality and distinctive meat products. You’ll find them located in the famous Chelsea Market in New York City’s Meat-Packing District.

I’ll admit openly admit a preference for the less-healthy-for-you corn-fed beef but as a true fan of the Burger, I respectfully appreciate each kind for what it is. I often find restaurants serving grass-fed Beef to rely on the beef itself to carry the taste, neglecting to pay attention to seasoning or preparation methods. Such is not the case at Jimmy’s! This is one high-quality, full-flavored, perfectly cooked and juicy Burger clearly prepared by a kitchen staff and Chef who understand the value of taste. The greens give a nice texture and fresh feeling to the overall sandwich. No need for Cheese or sauces with this tasty Burger, the Crème Fraiche does the trick using a subtle taste profile that coddles the beef.

Pair that with some tasty Belgian ales and an unbelievably savory and delicious Skillet-fried Beer Sausage with Dijon Mustard and you have something worth talking about (hence this blog!)

Jimmy’s No. 43 is a fantastic, artisanal and truly unique offering that can only be found in the EVILL. I’m proud to call them a neighbor. Stay tuned to the Yeah! Management Facebook page for more details on this year’s East Village Eats Tasting Tour. 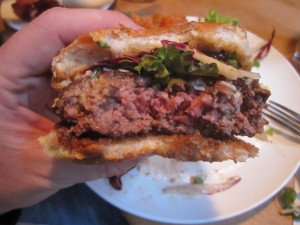 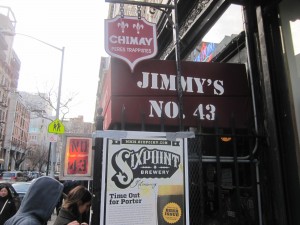 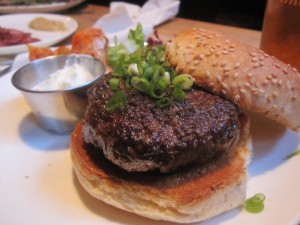 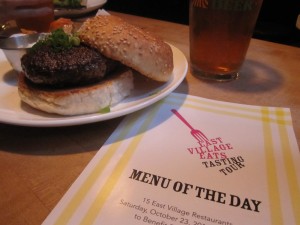 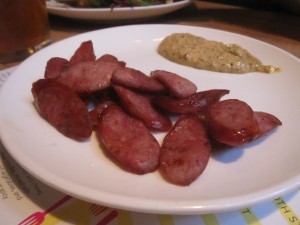 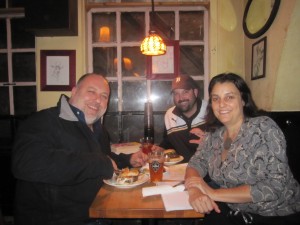