THE CONQUEST
If Indiana Jones came a knockin’ and told you to meet him somewhere, you would do it. When that Indiana Jones is George Motz, author of the book “Hamburger America,” I say ”
“You said to stand against the wall, I only did what you say, not my fault, not my fault…” and then I come running.

On this day, Mr. Motz was releasing his very own smart phone app called “Burger GPS.” According to him, the app is an “Official State-by-State Guide to the most interesting burgers in the USA.” The app acts, as the name would correctly lead you to believe, as an actual GPS device that finds the nearest Motz approved Burger to your location. Along with George’s approved selection, you’ll also find a section labeled “EBTs.” EBT stands for “Expert Burger Tasters.” They are a crew of Burger fanatics that have helped George along his very own pursuit of delicious Burgers. I’m proud to say that George picked me to be one of them. Once inside the app, tap “more,” and then “EBTs.” Then scroll down and tap on “The Rev” to find my selections. 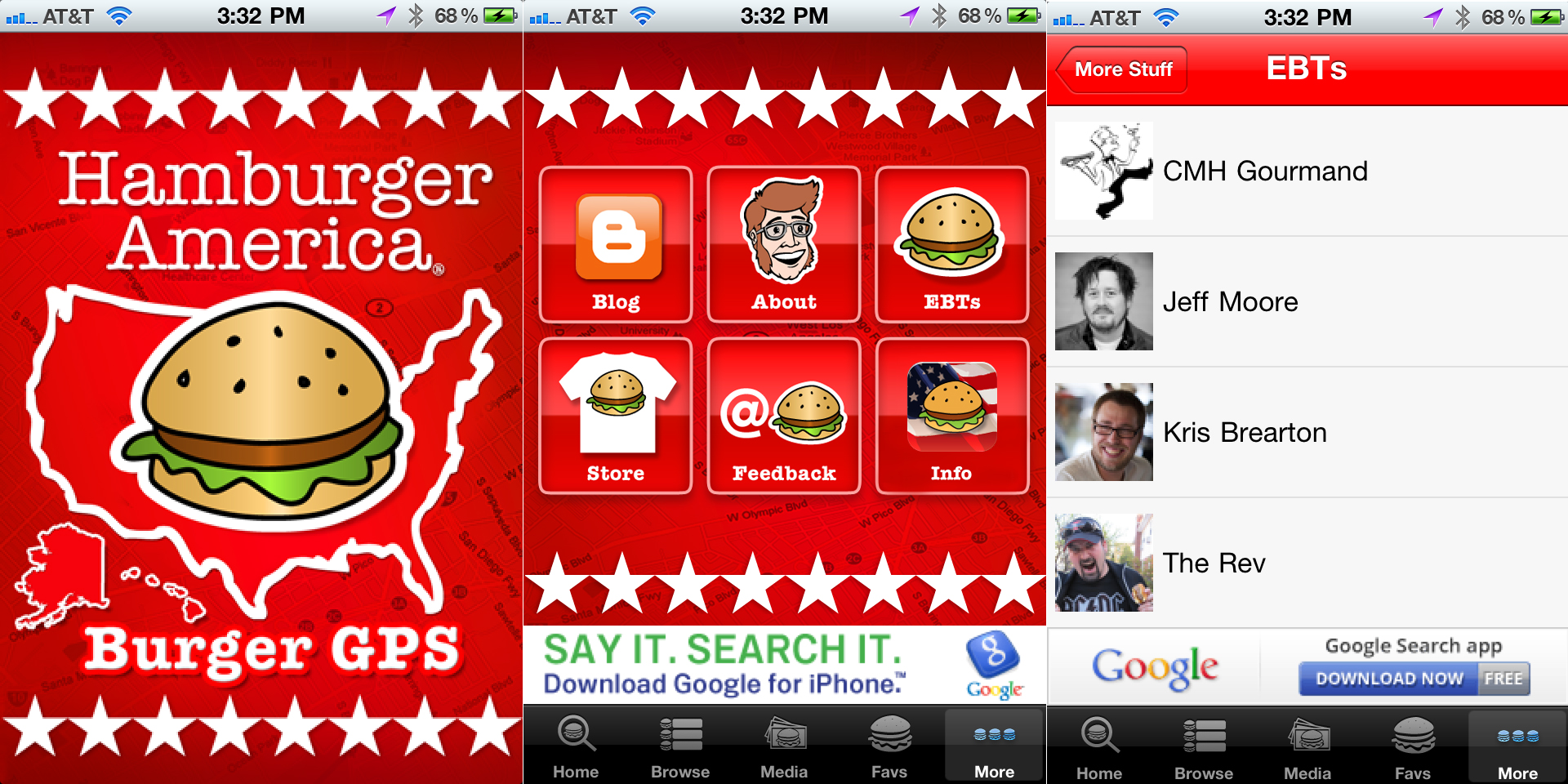 To celebrate the release of Burger GPS, George and his right hand man, Seth Unger, organized a Burger luncheon for the press at Bill’s Bar & Burger in Midtown. This Bill’s is the 2nd and much larger version of the original Bill’s Bar & Burger located in NYC’s meatpacking district. The Burger joint has seen much, much acclaim since opening and spreading the love of Burgers by using Pat LaFrieda meat. We were joined by Brett Reichler, the B.R. Guest Restaurants corporate executive chef who told us all the very exciting news that a 3rd Bill’s Bar & Burgers is about to open in Atlantic City.

THE BURGER
The luncheon had a pre-chosen menu, selected by George and Brett that started off with tasty Buffalo Wings and the super awesome and tasty Jalapeno Bombs. From there, Chef Brett surprised with a little off-menu treat, White Castle style Sliders. I love, love, love me some White Castle so this was like a dream come true; A White Castle Burger made from fresh, never frozen ground Beef. Had I known they were coming, I would’ve asked to be served them without Pickles, which I can’t stand. The tasty little treat was as good as I had imagined! Chef Brett applies a dab of a Mustard & Ketchup mix to the sandwich, which I could’ve also done without, but that didn’t change my opinion…these are great. 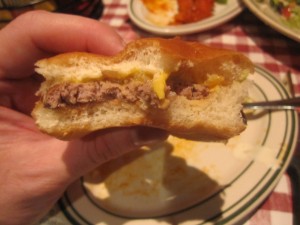 One of our choices was the Bill’s Bar & Burger Tuscan Turkey Burger and with 19 straight days of Burgers on my quest to eat 31 Burgers in 31 days in celebration of National Hamburger Month, I jumped at the chance to order a Burger that wasn’t Beef. The Tuscan is served with Lettuce, Tomato & Mustard Aioli on a Multi Grain Bun. The patty itself, as Chef Brett explained to me, is made from freshly ground all DARK Turkey Meat with Aged Provolone and Spices mixed in. Turkey Burgers have a knack for being a little bland, what with Turkey meat having a much more mild flavor profile than you would get from Beer. This one however is quite the opposite. The patty is grilled to an almost crispy point on the outside but left soft and juicy in the middle. The flavors will burst into your mouth with every delicious bite.

I’ll be damned if the Tuscan from Bill’s Bar & Burger Tuscan isn’t one of the best and most tasty Turkey Burgers in this town. Lawrence the NYC Food Guy, who was seated next to me proclaimed “I would never nor have I ever eaten a Turkey Burger.” That’s when I insisted he try a bite. Lawrence agreed, this is a great sandwich. 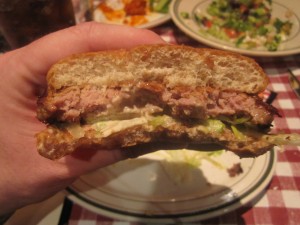 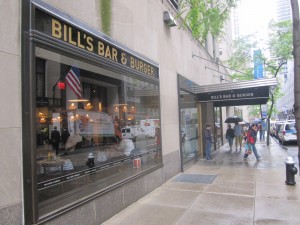 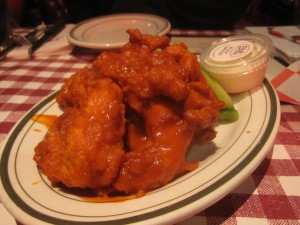 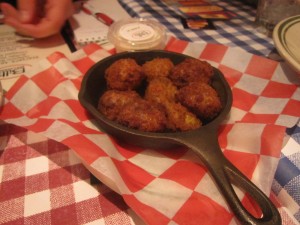 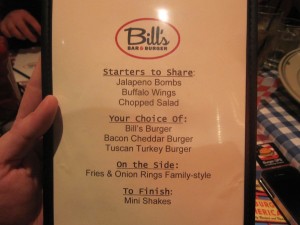 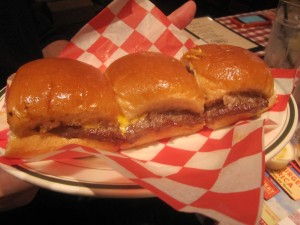 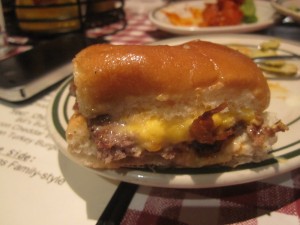 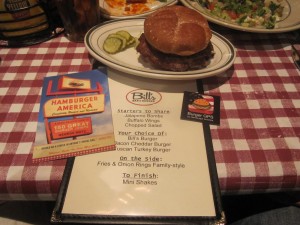 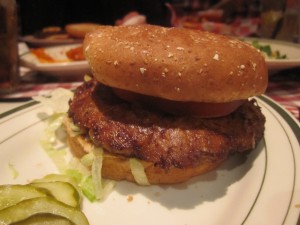 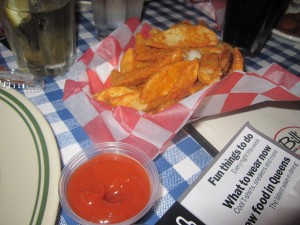 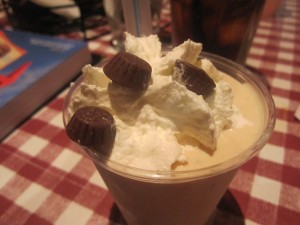 The meal ended off with a choice selection of Bill’s Bar & Burgers famous shakes. I’m not much for sweets but there was no way I was going to pass up a a creamy and delicious Peanut Butter Cup Shake! Clearly, neither was George… 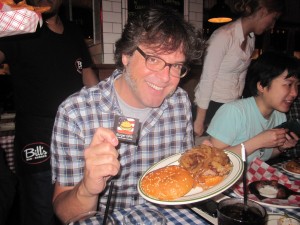 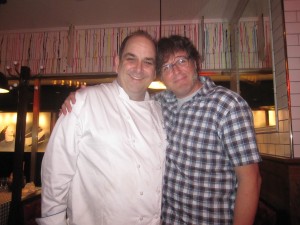 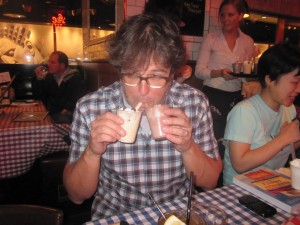 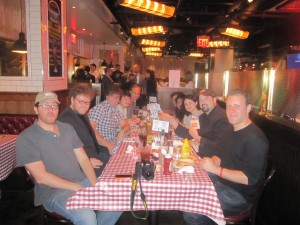 Download The awesome Burger GPS to your smart phone and be sure to pick up a copy of the beautiful and inspiring “Hamburger America.” You’ll thank me later.

Bill’s Bar & Burger scores a PERFECT 10 on The Rev Meter!!