THE CONQUEST
In February of 1960 a monumental gathering of the world’s super-finest was causation for the formation of one of the most formidable teams in the history of the world. We know them as the “Super Friends” from the Justice League of America, a gang of Superheros united in a battle for the forces of good. While the modern day city streets of NYC seem to be free of evil baddies, there is still need for a group of individuals who can help us sort through the muck. On this 19th of May, in the year of 2011, during National Hamburger Month, a new group of enhanced beings gathered together to form a team whose sole intent is to defend the good…good food that is!!

Welcome “Chew Crew America” to the universe. This gastronomically motivated gaggle of food fans includes Lea from Bizzy and MacCheesy and Rachel, the Fabulous Foodie, Megan AKA This Girl Can Eat, Lawrence the NYC Food Guy, Rev from Burger Conquest and our special guest Lee. We have been given special powers that allow us to find the best and tastiest foods from the most unique and interesting chefs and locations. Our mission is to share them with you, the food conscious, through the power of recommendation.

This super gathering of super eaters took place at Social Eatz in East Midtown NYC. The restaurant was recently crowned by Eater as having “The Greatest Burger in America.” Their menu comes from the Brain of  Top Chef All Star, Angelo Sosa. A self proclaimed “Asian food fanatic,” Angelo’s menu at Social Eatz is all in some way Asian inspired, ala including all 4 Burgers on the menu, the reason for our visit.

THE BURGER
As I sat there perusing the choices, sipping on my Coney Island Lager, I was having trouble deciding which to mow down on. I was absolutely starving which was impeding my ability to make a decision but one the thing I knew I wanted was an appetizer of Hot Wings. God Bless Lee and Lawrence who talked me into splitting all 4 Asian inspired Burgers on the menu.

Ain’t nothing wrong with a classic and that’s why the category was created. Angelo and Social Eatz are using fresh, quality Beef in their patty and giving it room to dance on your palette makes for a win. You have your choice of Cheese at Social Eatz and I can’t believe I had to argue with Lee about Smoked Gouda. SUPER. DUPER. YUMMY
– 8 out out of 10 ounces

HANOI – Ground Beef with Mint, Lemongrass, Cilantro and Red Onion topped with Lettuce and served with a Chili Mayo and a Sweet Onion Jam

This was my favorite of the bunch for sure and if you’re coming here to enjoy a signature experience, I would most certainly point you to this Burger. The Mint was an unexpected and fantastic flavor turn that really made the whole thing stand out.  With all the other ingredients however, you’re really more so tasting the toppings than the Burger. None the less, it’s a unique twist and a tasty one at that!
– 8 out of 10 ounces

This was my least favorite of the bunch, in fact, I didn’t like it all. That’s not to say you wouldn’t enjoy it nor am implying that it was bad in anyway, it’s just not for me. I can’t stand Cucumbers or Kimchee and was I not participating in some team eating, I wouldn’t have ever considered this as an option. I would be very curious though to try something like a Chicken stir fry style dish with the same spices and seasonings, sans the Cucumber Kimchee.
– 5 out of 10 ounces

Finally it was time to chew into the Superman of the evening, the famed, award winning Bibimbap Burger. According to wikipedia: “Bibimbap is served as a bowl of warm White Rice topped with Namul (sautéed and seasoned Vegetables) and Gochujang (Chili Pepper Paste). A raw or fried Egg and sliced Meat (usually Beef) are common additions. The ingredients are stirred together thoroughly just before eating.” I love Bibimbap and not just as a dish but also as a word. Say it with me, “BIBIMBAP.” Wasn’t that fun?!?! It’s especially great after you’ve had a few or 50 beers and have the munchies.

But let’s talk about this Burger. I just wasn’t into it. Rachel argued that one needs to eat the entire thing and enjoy the full experience of the Egg, as she loved the Burger. As I shared it with Lee and Lawrence, I did not have the eggcelent intended presentation. A fried Egg is definitely a fave topping of mine and could’ve changed my experience. The Pickled Carrots I liked but the Cucumber I did not and the sauce that it’s made in wasn’t up my alley either. Having said that, the Beef is great, I love the Bun choice and fried Eggs are a bonus on any Burger. You might actually really like this, for me, I had to pull a Mxyzptlk.
– 7 out of 10 ounces 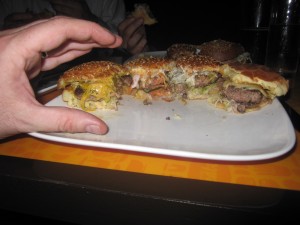 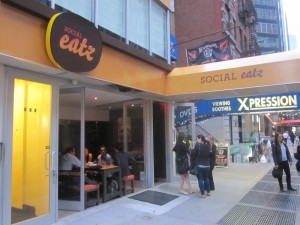 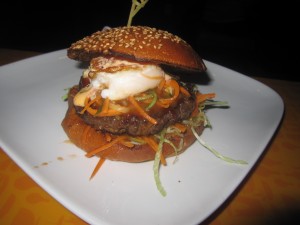 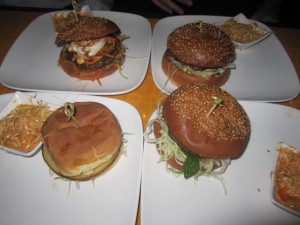 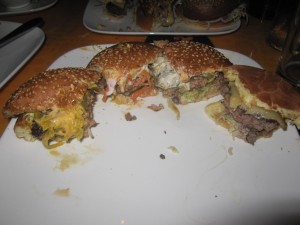 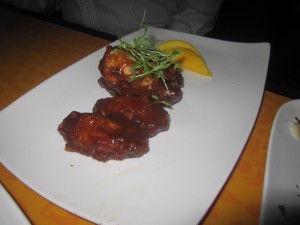 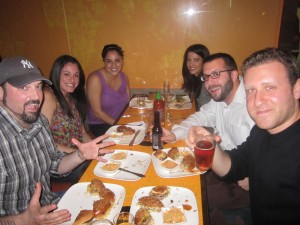 Unfortunately the Wings, as well as Megan’s appetizer of Ribs & Lawrence’s Tacos didn’t show up to the table until after the Burgers. I was a little upset about that as well as some of the slower service we received but to Social Eatz credit, not only were they very busy but they were also very apologetic and very friendly. We all have bad days and sometimes things just slip beyond our control, it happens. I was impressed with the way in which they made up for it. That’s they key to the restaurant business, great customer service. Speaking of…

I’d like to add a note of Kudos to Social Eatz for having a very active and responsive Twitter account. The group of us had been tweeting about Social Eatz for more than a week and they actively engaged us in the conversation. I was really impressed at their mastery of the application. Two snaps to Social Eatz who wins this week’s Chew Crew America “Gleek” no-prize.

AND…. don’t forget that Bizzy Check-Out! 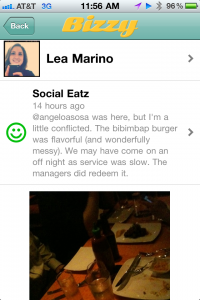