Zaitzeff – After the Party, There is the Burger Party, National Hamburger Month

THE CONQUEST
When I started my mission to eat 31 Burgers in 31 days to celebrate National Hamburger Month, I planned out nearly every day in advance, until today. I figured I would let the last week shoot in the wind and see what happened. This of course is with the knowledge that there is a 24 hour White Castle in my neighborhood. Which by the way, if you have a Burger to suggest for the next couple of days or a way to end this on a bang, send me a note!

Everyone knows that educated drinking is healthier for you. That’s why we offer Learning to Beer and Bourbon lessons every Wednesday night at my bar in the East Village, Idle Hands. Each week beginning at 7 pm we bring in a different brewery and team them up with a different distiller for a 2 hour, private tasting session. Attendees learn about the history of the brewery and distillery as well as taste up to 3 bourbons and 9 craft beers. It’s a really, really fun and exciting way to learn not only about how these tasty drinks are made but also learn more about a particular brand’s profile. We also bring down food from local merchants to pair with the drinks. It’s a freaking blast every week and as the Beer Sommelier, it’s a pleasure to share my passion for craft beer with others.

On this particular Wednesday we presented a VERY special Learning To Beer. Lagunitas & Victory Beer teamed up to present “Reign In Beer.” Each brewery poured a selection of their amazing brews and each of which was paired up with a different Slayer song!

It was an incredibly fun night and along with tasting some mighty fine beers with Mark from Lagunitas and Sean from Victory, we got to wash it down will raging to SLLLAAYYYEEERRR!! Below are the pairings and here is an iTunes link to the playlist.

That’s A LOT of great beer!

Click here to see more photos from the event itself.

As were all enjoying the metal and the beer, I realized around 10 pm that I still had not had my Burger for the day. “You guys wanna go get a Burger and help me celebrate National Hamburger Month?” I asked to our beer rep friends. “Oh Hell Yeah!” answered Victoria, our Union Distributor rep, “Have you been to Zaitzeff?!”!” That’s when I explained that I had promised The Big P.A. from SteakClub7 that I wouldn’t go until he took me. But that was nearly 2 years ago and it was getting tougher and tougher to avoid a well respected Kobe Burger that happens to be directly across the street from Idle Hands.

Zaitzeff has a simple concept; “Our formula for hamburgers is simple. We get the best ingredients and fuss with them the least. Our American style Kobe beef comes straight from a ranch in Nebraska, so you know it’s fresh. Our sirloin, which we grind ourselves every day, is grass-fed. We cook our hand-cut fries in cast iron skillets which enables us to change the oil daily.” Known as a quaint, foodie friendly restaurant that serves all of their burgers on an amazing Portuguese muffin that is their claim to food fame. Their East Village location is still awaiting their liquor license but that shouldn’t stop you in the least to eat in or order out from Zaitzeff.

THE BURGER
I’ve eaten the Turkey Burger from Zaitzeff and loved it but tonight my boozy beer buds and I were there for one Burger and one Burger only, the Kobe. Let’s first chat about the Bread. Zaitzeff uses a signature Portuguese Roll that has a nice sweet flavor and the presentation of a thick Pancake. It’s almost worth toasting, Buttering and eating by itself! Another point in the favor of Zaitzeff, the option to add a Fried Egg to any Burger. To be honest with all of you, I am more inclined to add a Fried Egg to a Burger than I would be say something as popular as Bacon. Yeah, you read that right. Another big win is the Zaitzeff Jalapeno preparation. They take an entire Jalapeno, slice it in two and cook it on a stove top much like you would a roasted Red Pepper. This allows the Pepper to retain all of it’s natural heat but also bringing a new flavor to the profile. It’s MUCH hotter than you think it will be. As for the Kobe Beef, was it really from Kobe Japan, well I didn’t ask but I will tell you that where ever it comes from, it’s damn delicious! Wash it all down with a tasty Prima Pils from Victory until which time they start to carry Lagunitas and then feel free to order either!

Sorry Big P.A. I still love you lots and would easily go eat here again with you. 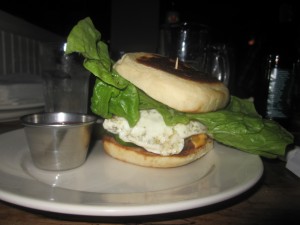 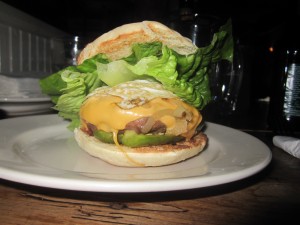 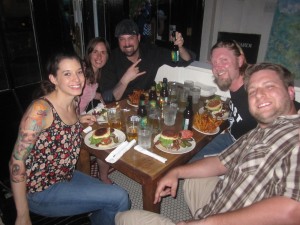 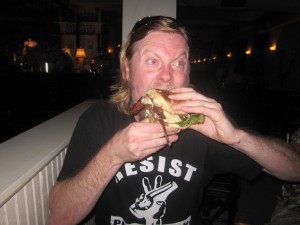 Zaitzeff scores a 0 on The Rev Meter.

3 Responses to Zaitzeff – After the Party, There is the Burger Party, National Hamburger Month