THE CONQUEST
The last thing I wanted to do today was eat a Burger. Attempting to eat 31 Burgers in 31 Days in honor of National Hamburger Month was foolish, difficult, tiring, exhaustive and most of all, AWESOME. But enough of my whiny ass, let’s get to that last Burger.

The #1 NYC Burger people ask me if I have eaten is the Black Label Burger at the Minetta Tavern. This $26 Burger is made from prime dry-aged Beef cuts supplied by Pat LaFrieda. It’s lore in the Burgerverse is legendary and supposedly it’s amazing, although I have also been told it’s really overrated and therefore over priced. None the less, I’ve tried several times to make reservations for the world’s #1 Steak Club, Steak Club 7 but to no avail. There are 3 problems with this; 1. the place is tiny, 2. the biggest table they have seats 6 and the SC7 clearly has one more than that and the worse part, 3. the only reservations I’ve ever been able to get are before 6 pm or after 10 pm, when no one really wants to dive into a hearty steak. So no, to answer your question, I have never had the Black Label Burger from Minetta Tavern.

Recently a new Burger came onto the NYC scene setting a massive flutter across the Burger radar screen and it’s called the White Label Burger. Much like it’s cousin, the Black Label Burger at the Minetta Tavern, the White Label Burger is made of Beef supplied by the Jay-Z of meat, Pat LaFrieda. This 8oz. La Frieda Prime Burger comes topped with Nueske’s slab Bacon, American Cheese, Black Tomato & with a side of crisp Pomme Dauphine. You’ll find this fancy-schmancy Burger creation at Ai Fiori, the mezzanine level restaurant at the equally boutique, Setai Fifth Avenue Hotel in NYC. Ai Fiori, created by Chef Michael White, is a fine-dining Italian restaurant built to feed the hungry and tired of this luxury hotel using some of the finest, and most expensive, sourced ingredients in all the land. Coming in $7 cheaper than the Black Label, the Ai Fiori White Label Burger is still a hefty priced $19 and one of the most talked about Burgers in all the land.

And you know what they say…if you’re gonna go out, go out with a bang!

THE BURGER
The attention to detail at Ai Fiori is staggering and extremely well thought out. My favorite example was the incredibly patient waiters explanation, to the last ingredient and preparation, of EVERYTHING he served me. I felt special. It was he who explained to me that the White Label Burger was at heart, an attempt to create an uber-high-end and exquisite version of a White Castle Slider. Amazing. Take the world’s most pedestrian and oldest Burgers and Bourgeois it all up. Unreal.

The Brioche that it’s served on is really crunchy on the outside in the toasted way but really soft and warm on the inside. Clearly the soft steamed Bun of a White Castle was one aspect they care not for. The patty however, is shaped in a square, which admittedly, brought a smile to my face. Ordered medium rare, this Burger is cooked not unlike a perfect Steak, by searing the outside to create a slight crunch while leaving the inside red and juicy. When I say this Burger was juicy, I certainly don’t intend it in the way I would normally describe a Burger that met my approval. This Burger’s juices were FLOWING and when I was finally done consuming it, there was a massive puddle of awesome in my plate. My Pomme Dauphines all took a little bath in it! Even my camera was covered in the juices. The Bacon is surprisingly subtle which basically means you’re tasting the natural flavors of the Pork and not smoke or salt additives. NICE. Flavor wise, the thick Cheese is very pronounced almost has a grilled Cheese like mouth feel.

As for the potatoes, they were gently crisp on the outside but soft and light in the middle. I would liken them to a warm cracker around whipped mashed potatoes.

The White Label Burger at Ai Fiori is less about each part and moreover about the harmony they create together. Expect to actually salivate before, during and after you eat it!! 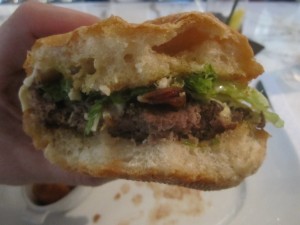 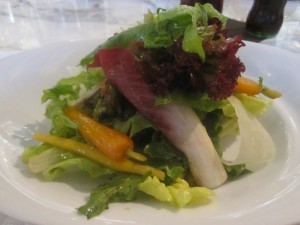 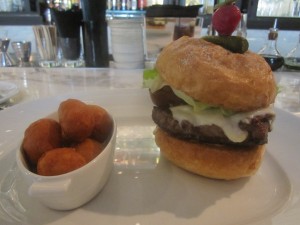 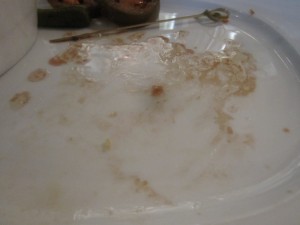 Ai Fiori scores a 3 on The Rev Meter.