The Burger Garage – 2 Reasons to Get Rid of your CDs

THE CONQUEST
It started in 1992 with Mr. Bungle’s self-titled debut and Mother Love Bone’s self-titled album compilation. Those were the first 2 CDs I ever bought. That launched an obsession that lasted nearly two decades with collecting compact discs. Over the years my collection has moved 10 times in 3 different states and amassed to a a size of just around 3500 pieces.

In May of 2000, one of my favorite movies of all times, “Pee-Wee’s Big Adventure” was released on DVD and I ran out to the store to get it. I absolutely had to see the deleted scene with Amazing Larry’s floating hair trick! Funny thing though, I didn’t own a DVD player until months later. However, the idea of getting more from my favorite movies became an 11 year obsession with collection director’s cuts, deleted scenes, special editions and all sorts of DVDs. My collection eventually grew to about 300 pieces including 3 copies of Steve Martin’s “The Jerk,” the only movie for which I also own the official poster.

Several years ago, I picked up all my stuff and did something I said I would never do; I moved into Manhattan. I fell in love with a girl who is now my amazing wife and moved into her apartment. I took all of my personal belongings that I didn’t “need” and put them into a storage space in Jersey City. Among those “things” were my entire CD and DVD collection, at the time. The thought being, if I needed any of them, I could just go grab them out of the storage space. Well in all those years, I know the exact amount of CDs and DVDs I have gone to collect from the space since they went into lock-up…ZERO.

I thought I would want them, I thought one day we would move into a big house and I could put them all back on display. My pride and joy, my grand music collection, the item I most obsessed about for more than half of my life, had all been converted digitally to fit conveniently in a tiny little iPod and a hard drive. No more skipping, no more having to loan out rarities, no more having to carry around a bag full of discs everywhere I went and most importantly, no more heavy lifting  every time we had to move.

After recently moving out of my office, I came to a decision that I also never thought would happen…it was time to go digital and get rid of my cumbersome media collection. What was the point? I never go to get any of it, I’m paying good money to keep it in storage and hell, I haven’t owned an actual stereo in 5 years!! But what to do with it?

I don’t have the time or patience to sell it on eBay. There’s no way I am going to stand around at flea market hawking it. I certainly don’t have the time to go and digitize all of it myself and there is no way in hell I am going to pay someone, even at $1 per disc, to do it for me. This collection was hanging around my proverbial neck like a proverbial albatross. But it had to go.

That’s when a targeted Internet search landed me on iPodMeister. They are a company that will take your CDs and then sell them in less fortunate countries. All you have to do is package them up and mail them in. From there, you have the option to have all your titles digitized and then based on how many of them you turn in, iPodMeister will send you back your choice of digital devices. You can choose from iPods, iPads, iPhones, Droids, Kindles, Nooks and more. A few days later, DVDs with your entire music library and your brand new digital media device shows up at your house. No more bulky CDs, no more large DVDs, just a nice little, small and easy to store collection of music and something to play it on.

Sounds too good to be true right? I did the research and it’s all real. With stores on CNET, AM New York, Mashable, the Consumerist and more, I had to believe it was real. What was even better was when I discovered that the company is located in Long Island City, NY, just over the Queensboro Bridge and they accept drop offs!! Are you kidding me? Spend hours and hours and hours digitizing CDs and then more and more and more hours packaging them up and then taking them to the post office, or rent a van for $90, throw them in the back and drive them to Queens. HELLO! (Note, I ALWAYS use CC Rentals when I need a van in NYC.)

and that’s EXACTLY what I did. 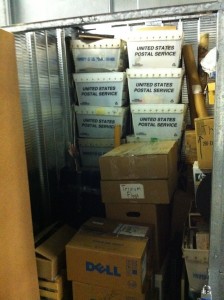 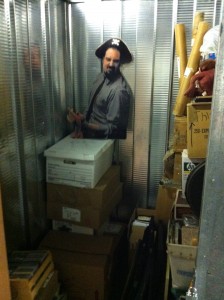 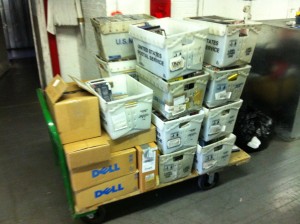 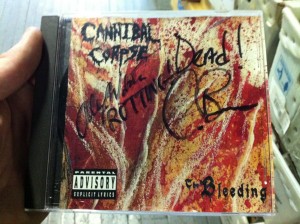 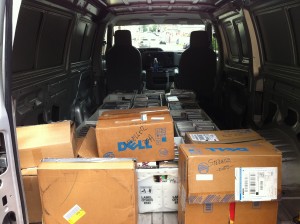 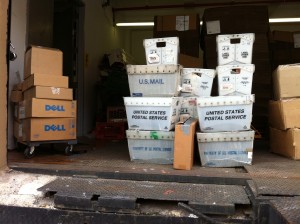 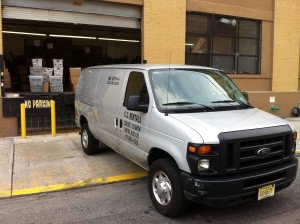 A couple of hours later and 20 years of my life were sitting on a dock, waiting to be converted and then be shipped overseas. This process took be the better part of a Saturday afternoon but it was totally easier and quicker than any of the alternatives. I had developed quite a hunger moving all those heavy crates and boxes. That’s when I remember something I had seen in George Motz’s “Hamburger GPS.” It was a recommendation for a Burger joint in LIC and seriously, when was I going to be in Long Island City again with a vehicle?

As property in Manhattan gets more and more expensive as well as more and more scarce, the outer boroughs are having an amazing revolution in real estate and resulting local businesses. Sure, sure, everyone and their wiry mustached, deep-v t-shirt wearing, uncombed brother are moving to Brooklyn, there’s also a nice modernization happening just north of it, over the Pulaski bridge in a section of Queens known as Long Island City. As high rises go up, places to eat follow and one such restaurant that’s making the neighborhood a little more desirable is The Burger Garage.

Brothers Jim and Adam Pileski, from the same family behind the famous steakhouse, the Palm, founded the Burger Garage in 2009. The concept was to open an auto-body themed, fast-casual Burger joint with high quality ingredients but a limited menu. The bro’s Pileski use a Pat LaFrieda supplied custom blend of 100% Black Angus, USDA Certified beef with no hormones or antibiotics ground daily as well as all real cheese. All of their produce is delivered fresh daily and their shakes are made from hand dipped premium ice cream.

Conveniently, The Burger Garage is only about a dozen blocks away from the iPodMeister offices which took me approximately 3 minutes to drive to in my CC Rental van. I swear none of the above paid me to talk about them but I would happily make trades in the future!! HA

THE BURGER
Pop into the Burger Garage, place your order at the register and grab a seat in a booth, or like I did, at the counter where you can get a view of the line cooks prepping your lunch. The car theme gives the place a roadside American feel which is something I know George Motz loves. And speaking of George Motz, right inside the door I found a magazine rack with the summer of 2011 issue of Edible Queens. The cover story, entitled “Burger Kings” was a story written by the Motz-man himself about the best Burgers in Queens. Sounded like great reading material while the Pileski bro’s cooked up my order. I won’t spoil the reading by telling you which are the 5 but The Burger Garage is one of them. 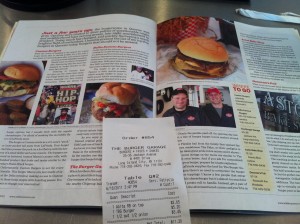 The first thing I noticed when my order arrived was the OBSCENE amount of French Fries and Onion Strings. I had gotten a 1/2 & 1/2 order which with the small cost of $2.70, I didn’t expect much to come. A 1/4 & 1/4 order would’ve been more than enough but The Burger Garage doesn’t offer that as an option so prepare for French Fry / Onion String overload. Both of them are hot, fresh and not salty at all. The Onion Strings are like gourmet Durkee Onions. You will enjoy them both.

The Burger Garage makes a short-order California style Burger ala In-N-Out that comes wrapped in a single sheet of restaurant paper-foil. Get yourself a “B.G. Burger,” their signature offering, a 4 ounce patty which comes on a squishy Potato Roll with American Cheese, Lettuce, Tomato, Onion, Pickle & “The B.G. Sauce.” Everything, and I mean everything about this Burger was great. It’s essentially a high-end, fast-food Burger served at an affordable price. The Cheese is almost creamy once it melts on the Burger adding just enough dairy flavor to accent the Burger itself. The fresh produce is crispy and clean to the taste. As for the sauce, it’s just a little sweet and just a little spicy but used in just the right amount so as to only accent and not at all take away focus from the freshly ground beef. The Pat LaFrieda Beef blend used at the Burger Gargage is juicy, flavorful and just a touch of sweet to mix in with the savory. I loved it so much that I had to get another right after I finished the first one!

They don’t serve any alcohol but they do have Abita Root Beer on tap and if you choose any other beverage available there, you lost. I had 2 full glasses of it and my only wish was that it came in a frosty mug, not a plastic cup. None the less, it’s an amazing soda.

The simplicity of the Burger Garage Burger is what allows your taste buds to focus on all the fresh, quality ingredients it’s made with. 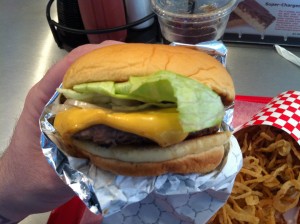 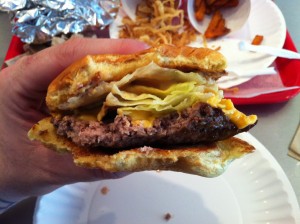 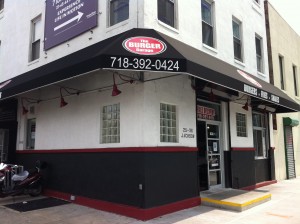 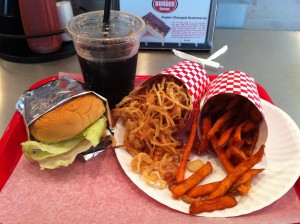 The Burger Garage scores a 6 on The Rev Meter.