THE CONQUEST
Back in 1995 when Jon Bloostein started the Heartland Brewery, there were only 2 other brewery / restaurants in the city. Now in 2011, the Heartland Brewery is now largest group of brewpubs in the area. Known for their award winning beers, regular and seasonal, their latest expansion also has them gaining notoriety for something else, Hamburgers. The Heartland Brewery has an off shoot known as HB Burger where you can still get their tasty beer but also an amazing array of Burgers.

Jon Bloostein, the man behind Heartland and HB uses Pat LaFrieda meat to serve up their menu of tasty Burgs’ that are best served by washing down with their great beer. I recently ran into Jon and made him promise that he would have a Burger with me when I redeemed my Pat LaFrieda Burger Passport from Thrillist Rewards. My what!?!? Yeah that’s right! Available until 8/10/11, Thrillist Rewards is offering a Pat LaFrieda Burger passport that gets you 5 different Pat LaFrieda meat supplied Burgers with 5 beers at 5 different locations in NYC…all for only $45!!!

There’s only two reasons not buy this;
1. You hate Burgers, but then why would you be reading this site?
2. You’re completely out yer freakin’ mind!!

INSTRUCTIONS TO GET THE PAT LAFRIEDA BURGER PASSPORT
1. Sign up for Thrillist Rewards with this link
2. Once registration is complete, buy your Pat LaFrieda Burger Passport before Aug 10, 2011 here.
3. Send me a tweet @BurgerConquest to let me know you got the sweet hook up! 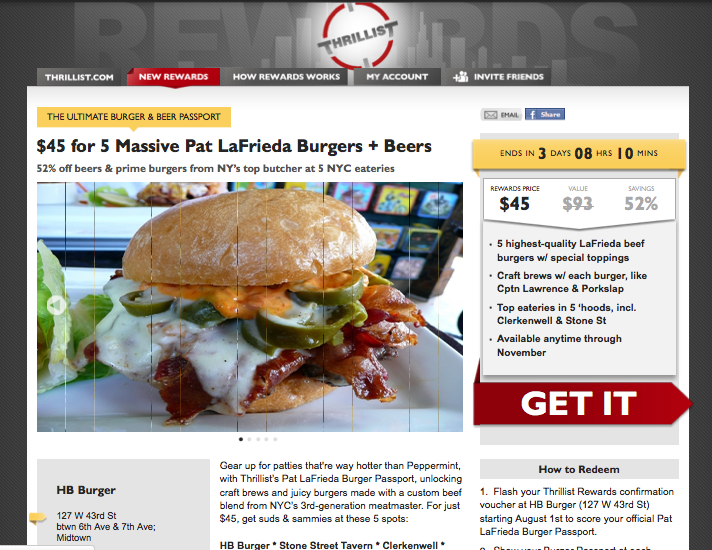 Once you have purchased it, you’ll be on your way to eating 5 tasty LaFrieda Burgers at the following places in NYC:

Jon agreed to meet me at HB, the redemption location for the passport, to share a Burger and a Beer. Jon being craft beer royalty in NYC and now a major player in the Burger chain, you could probably guess, I was pretty excited. I grabbed my friend and co-worker Alisha and we headed into Times Square to crush Burgs with a legend and a damn friendly one at that.

I ordered my Bison Burger cooked medium rare, on a Whole Wheat Bun with Onion Marmalade and Smoked Mozzarella. Jon threw in an order of Tempura Veggies and Tater Tots. As it was National IPA Day, I used my passport to order a glass of the Heartland Black IPA. The tasty but mild roasted Malty & Chocolate flavors in the beer mask the bitterness hops would normally add to an IPA in this incredibly well balanced and wonderful beer. As for the Burger? FANTASTIC! The Bison meat is well seasoned, cooked perfectly and has a taste that is incredibly savory and yet slightly still sweet. The onions add to the sweet undertones while the Smoked Mozz brings out the salty flavors in the meat. The balance between the two are just amazing. You won’t find another Bison Burger like this in NYC. In fact, this was the BEST bison burger I’ve ever had!

Best be getting that Pat LaFrieda Burger Passport from Thrillist Rewards before it’s no longer available! There’s 3 Burgers on this list I haven’t had. Want to join me? 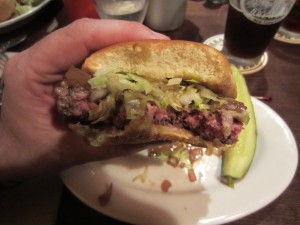 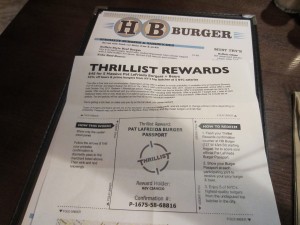 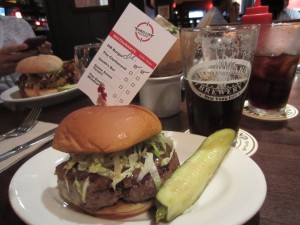 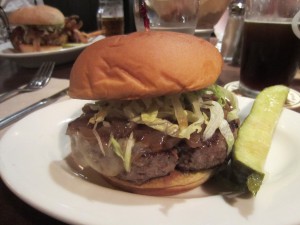 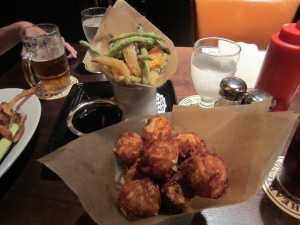 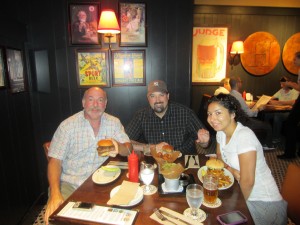