White Hut – Fresh Fast Food The Way It Was Intended

THE CONQUEST
Summer’s here and love is in the air! When my friends Paul and Mary asked me to perform the services at their wedding I of course said “YES!” (Yes, “Rev” is short for “Reverend” and YES, I really am ordained.) I won’t do it for just anyone but Paul and Mary are truly in love with each other and I was honored to help such a great couple join in matrimony. 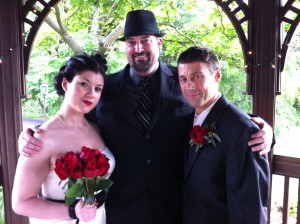 What this meant for me though was my first road trip of the summer and with all road trips, there always comes Burgers! Nothing like the open road to get my Conquest itches in gear. As I was headed up to Springfield, MA for their wedding I remembered many a person, including Paul’s band mate, Matt from Shadows Fall swooning over a Burger in their home town. After many years of Matt, as well as many others, telling me “Rev, you have eat at the White Hut,” I was finally getting my chance. The morning after the event, I woke up and stopped by before heading back to NYC.

In the late 1930s Hy Roberts opened a small hot dog stand called “White Hut” in West Springfield, MA. In 1939 he sold it to a former co-worker, Edward J. Barkett for $300. Edward expanded the menu and eventually moved into a store front where the restaurant still stands today. Edward wanted to focus on a fast counter style of business and installed a mere 12 stools right opposite of the grill itself. Edward owned and operated the business until 1985. The place was run by his family and in the latter part of the 60s, his son Edward H. took over running the White Hut. Today, it’s E.J. who now owns and operates it, making it a 3rd generation family business.

The White Hut concept is simple much like the menu, Hamburgers, Hot Dogs & Fries only, unless you get there before 10:30 am where they offer egg sandwiches and omelets. Other than the French Fries, it’s all cooked on a flat top griddle just the other side of the counter. All Burgers are made to order with only two choices of add-ons: Cheese and Fried Onions, both of which are a must. The other part of the White Hut equation is service with a smile. The place is filled, at all hours, with folks of all ages and walks of life. You’ll see families, construction workers, guys in dress shirts and even a Burger Journo! Everyone is treated like a neighbor and friendly chatter is abound at the White Hut’s counter. There’s no printed menus available, so know what you want before you sit down to keep the flow of hungry eaters moving!

THE BURGER
I purposely waited until after breakfast ended at 10:30 am because I had to have one of these legendary, historical Burgers before I left town. With hunger in my belly, coffee in my veins and a slight hangover that usually comes from hanging out with Shadows Fall, I pulled into the parking lot and assumed a spot, dead-center at the White Hut’s counter. I ordered 3 Hamburgers with Cheese and Fried Onions, French Fries and and ice-cold Diet Coke.

I watched 3 patties for fresh ground Beef hit the flat top griddle and in a few minutes they were sitting between buns with a healthy dollop of Fried Onions and Melted Cheese on a plate right in front of me. Looking at them, the melted Cheese was oozing out of the sides. They looked and smelled amazing which is probably what drove me to order an unnecessary 3rd Burger, but hey, how often am I in West Springfield, MA!??! One bite and I was in love. The sweetness of the Fried Onions meshed together with the gooey cheese, the great use of Black Pepper and the thin salty Beef Patty was a perfect mix of how a Hamburger is supposed to taste. The Buns, toasted in a press, are Crunchy on the outside and soft in the center. I hardly made a dent into the boat of freshly cut, crispy, golden and delicious French Fries.

The White Hut does the fast-food Hamburger the way it was intended; fresh, high-quality ingredients & served with a smile. 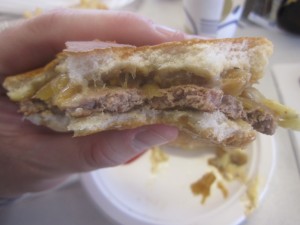 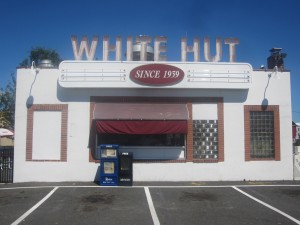 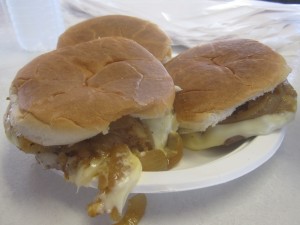 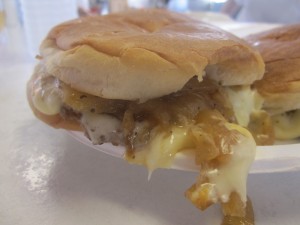 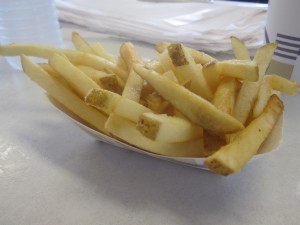 The White Hut scores a 1 on The Rev Meter.