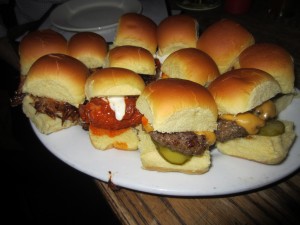 THE CONQUEST
When I started the Burger Conquest back in 2008, the idea was to create an excuse to eat delicious Burgers with my friends. Fast forward 477 Burgers later and a lot has happened. I’ve eaten Burgers all over the world, eaten them with Chefs, actors, musicians, writers and more. I’ve eaten them on TV and I’ve published hundreds of thousands of photos and words about those adventures. While the backgrounds and Burger change, one thing is still constant, and it’s the most important part, I am still crushing tasty Hamburgers with friends.

Back in November I made some new friends while representing Thrillist Rewards on a Nearsay Meetup panel entitled Daily Deals – Are They The Future of Local Commerce Or Gone by 2015? One was Shaila Ittycheria from the company Localresponse.com. They’re company helps other companies connect to socially network recommended (probably like you) through a cross platform check-in based ad network. Shaila then introduced me to Michael Muse, the founder of the company. The other was Jim Moran from a company called Yipit. Yipit takes all the daily deal sites out there in all the markets that offer you discounts, coupons and unique experiences. We instantly all became Burger buddies and met up over a secret Monday night Burger at Rub BBQ; The Ghetto Burger.

Shaila, now at Enstitute, two year apprenticeship program, empowering 15 young adults to study with and work under entrepreneurs in NYC, suggested a Burger reunion.  I thought it only appropriate to use a Thrillist Rewards voucher I had bought: Endless Beer, Sliders & Mac ‘n Cheese in EVill. 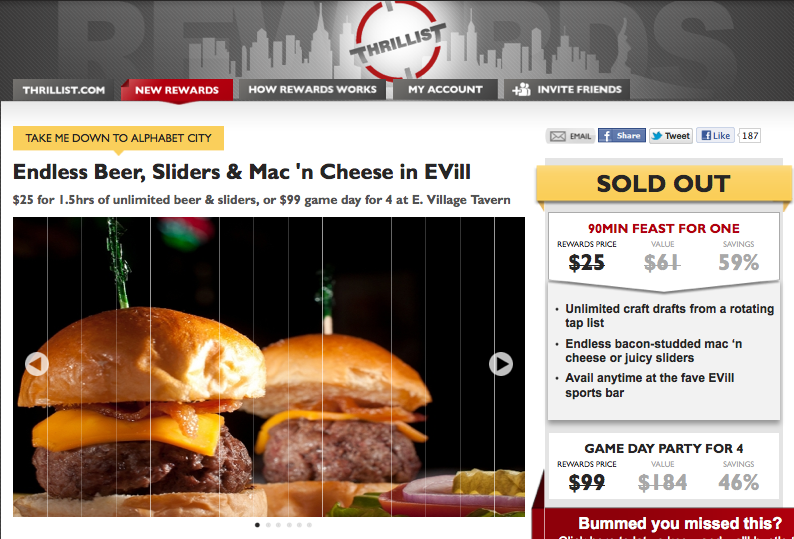 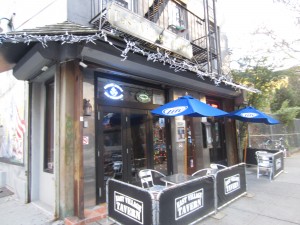 The East Village Tavern is a self-described American Gastropub known for keeping the folks on Avenue C well libated with a selection of craft Beers. It’s part sports bar, part corner tavern & part pub. The EVT is the kind of everyman’s bar where the hard work of a day can be blown off over great cold Beers, tasty Foods & the company of a friendly face. Whether you’re there to eat, drink, laugh, shoot pool, watch the game or play group trivia, the East Village Tavern is happy to oblige.

THE BURGERS
While the East Village Tavern does offer an 8 oz Tavern Cheese Sirloin Burger it wasn’t part of the offer. However, all the Sliders, (technically Mini-Burgers) Cheese Burger, Philly Cheese Steak, Buffalo Chicken or Pulled Pork were all up for grubs. All of them on mini Potato Rolls, the high-heralded Bun of choice for many a Burger enthusiast. We all ordered one of each and a cold Beer to wash it down with. For me, it as a robust and intensely delicious Founders Breakfast Stout.

The Burger came topped with a slice of American Cheese, a Pickle slice and ketchup. It was a (two) bite sized that honestly, made me wish I had ordered the full sized version. The Pulled Pork was sweet, savory and just the littlest bit crunchy around the edges. The mini Cheese Steaks came with Cheese and Onions, as they should and were most excellent. But of all them, my favorite was the Buffalo Chicken Mini. The breaded Chicken was fried just right, was just thick enough and covered in both a tangy Hot Sauce and dripping Blue Cheese.

Unfortunately the Thrillist Reward is no longer available, there’s nothing stopping you from enjoying an all you can eat and drink Sliders and Beer feast at the East Village Tavern. 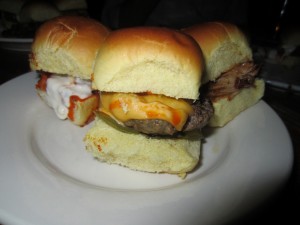 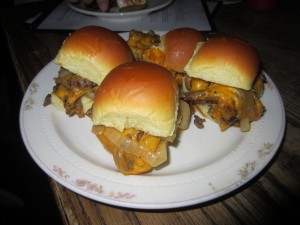 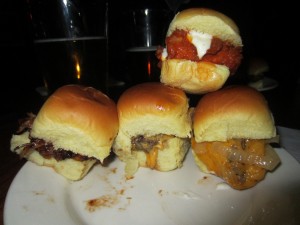 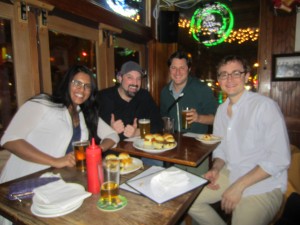 East Village Tavern scores a 7 on The Rev Meter.