Whitman’s – Lots of Ooze In the Offers 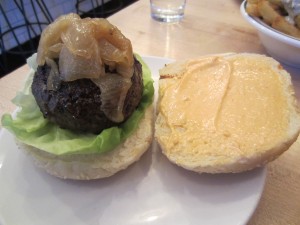 THE CONQUEST
Do you wake up every morning, grab your smart phone and start deleting emails from Deal-Of-the-Day & Social Coupon sites? I do. I must be on the list for a dozen or more of the currently reported 810 daily deal sites (according to Yipit.) Most of them get deleted in a flash because they don’t appeal to me, the offer is bad or I know for a fact the featured business sucks.  Although to be honest, I can’t figure out why they keep asking me if I want laser hair removal. If I had lasers for hair, ain’t NO WAY, I would have them removed!

But then every so once in awhile something comes along I can’t resist. When that does happen, it’s either from a place I love or a place I’ve been meaning to check out. Most business participate in deals is to gain new customers through exposure of the massive list that these companies have. In return, those companies take a cut of the sale before handing the “new” customer over to the business.

However, until they’ve established trust with you, you’ll only buy based upon the above two reasons. Do I trust Groupon to tell me where to eat? HELL NO. But if they offer 50% of Bareburger, which I already know and love, you can bet I will. Until Groupon (or any other site) can knock me over time and time again with what they’re offering, I’m just going to keep deleting and I’m guessing you’re doing the same.

Exception to the rule; Thrillist Rewards, which I buy from nearly every week.

Here’s a perfect example from Google offers; $5 for $10 worth of Gourmet Burgers at Whitman’s. I’ve been meaning to check out the place for ever and even gone so far as to reach out to the owner via email and twitter (no response). The morning this offer went live, my buddy Nick from No Jacket Required Marketing forwarded it to me and said “ever been to this place?” My response “Nope. I bought it though. When we going?” $5 is really not enough of a nose dive if I end up letting the deal expire without going. Deal Bought. 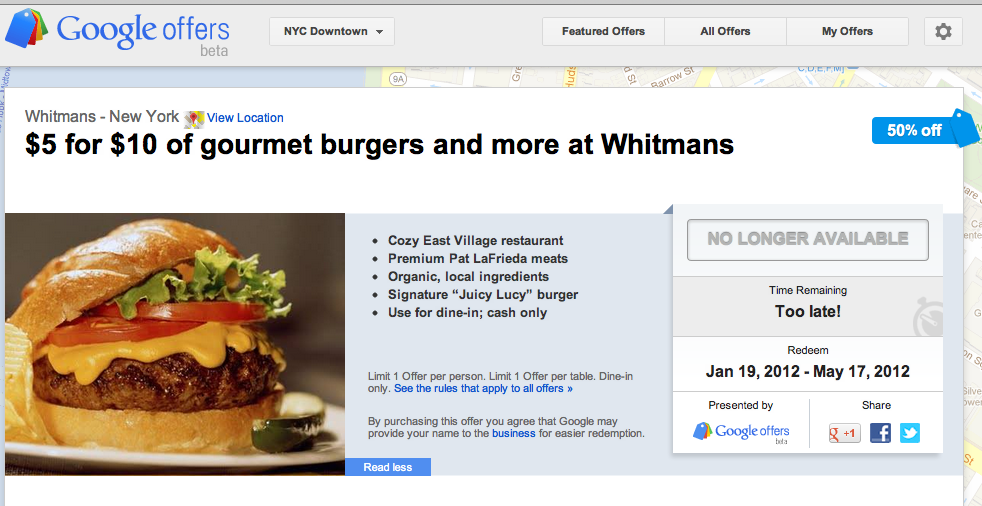 Whitman’s is located in New York City’s culture rich East Village. It’s a constantly morphing neighborhood filled with eateries, bars, shops, theaters, coffee houses and all other sorts of local businesses. It’s one of the only parts of lower Manhattan that isn’t littered with chain after chain business but moreover, small artisan’s honing their craft because it’s passion first, business second. The tiny, tiny, tiny little restaurant known as Whitman’s is a perfect example. With only a couple tables, it’s practically no more than a store front with a keg of Beer on tap. While place is small, the ideas are not. They’ve taken a number of Burger styles, Beef sources and preparation processes and combined them in original ways. Whether your into Grassfed Hot Dogs & Burgers, Pat LaFrieda Beef Cheesesteaks, Bacon Egg and Cheese, Turkey Burgers, Locally Made Beer Sausage or Free Range Chicken, the Whitman’s menu just about covers all meaty sandwich bases.

THE BURGER
For me, this trip was all about the Juicy Lucy, the Burger that made Minneapolis famous. I’ve never eaten one at Matt’s Bar or the 5-8 Club, the home of said sandwich but I’m all too familiar. The idea is simple and yet genius, stuff a Burger with Cheese so while it cooks on the outside, it melts the Cheese on the inside, giving you a bite of gooey cheese in the middle of the Patty. Matt’s reportedly uses American Cheese but Whitman’s elevates the idea by using a a topping popular in the Carolina’s, Pimento Cheese.

It’s all served on a hearty yet soft, White, Sesame Seed Bun with Lettuce, Caramelized Onions, Special Sauce, Tomatoes & Spicy Pickles (the latter of the two I asked to NOT be included.) The patty is hand made from Short Rib Beef and stuffed with Pimento Cheese before cooking. The Short Rib cut gives the Meat a real Beefy flavor especially with the char put on the Burger. It’s a nice tasty piece of Meat but BE CAREFUL, the Cheese inside is hot and will squirt. (That’s what she said.) Pimento Cheese isn’t really powerful on the tongue and while it’s definitely an interesting use, I would’ve preferred something sharper. That’s just opinion, not fact. The Sauce has a nice sweet tang to it that balances the saltiness of the rest of the sandwich. It was definitely worth the full $10, not just the $5!

Nick ordered the PB&B Burger which is Grassfed Beef topped with thick Bacon and organic Peanut Butter.  Some purists may call this lazy or unlikeable but Nick and I definitely called it DELICIOUS. Honestly though, you’re eating it not because you like Burgers, you’re ordering it because you love the idea of it’s decadence. Also of note, the Blue Cheese French Fries. Also a very decadent choice but hell, you aren’t reading this blog for healthy eating tips are you?

Don’t wait for the coupon, Whitman’s tasty Juicy Lucy is worth full price … and then some. 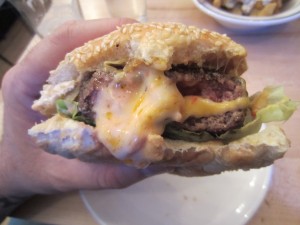 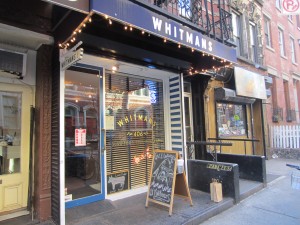 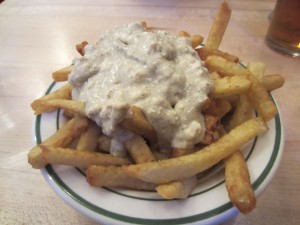 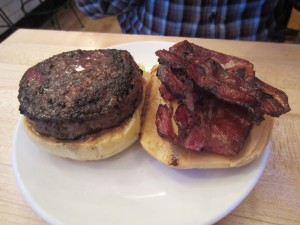 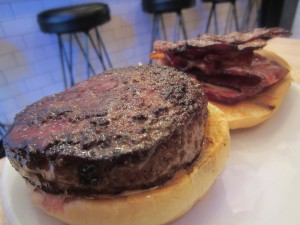 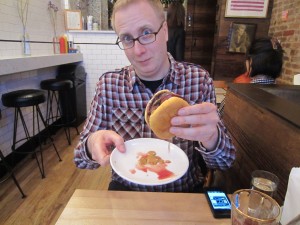 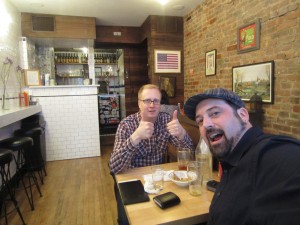 Whitman’s scores a 7 on The Rev Meter.

2 Responses to Whitman’s – Lots of Ooze In the Offers