If you love crowds, people constantly stopping in front of you, slow walkers, being by strollers being pushed by Dad’s distracted by the smell of cooked meat and BBQ, the Big Apple BBQ Block Party is for you! But jokes aside, this is the biggest annual BBQ in Manhattan and one of the best smelling weekends in NYC. The amount of time, effort and money spent on a single $8 dish that you’ll eat in 10 minutes or less deserves some very high praise. Now in it’s 10th year, the Big Apple BBQ Block Party returned with 17 of the most popular pitmasters & sought after BBQ in the country. 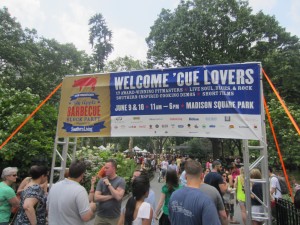 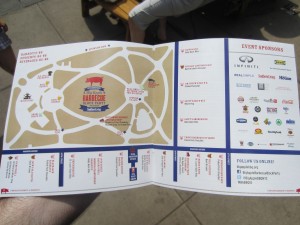 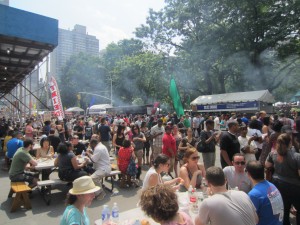 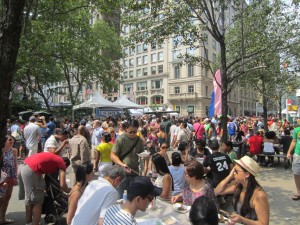 The event is incredibly popular, for obvious reasons but some of the wait can be circumvented by purchasing a fast pass. The fast pass grants you access to the VIP lines which are shorter than the free lines but for the most popular spots, like the Salt Lick, the lines can still be quite lengthy. Get there early, bring friends, separate into different lines and bring plasticware to pack up BBQ to go if you truly want the best possible experience. 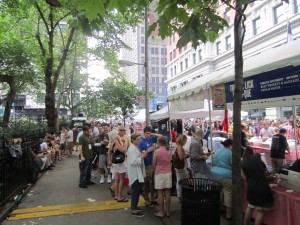 The event takes place in the beautiful Madison Square Park and offers sites, 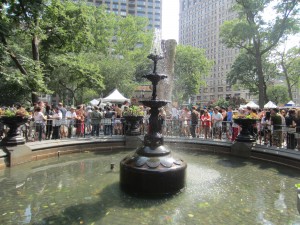 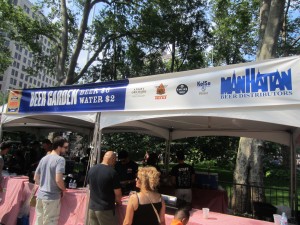 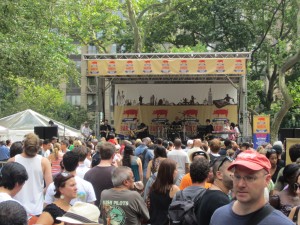 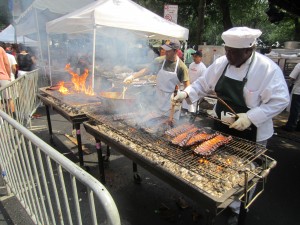 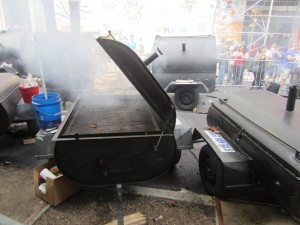 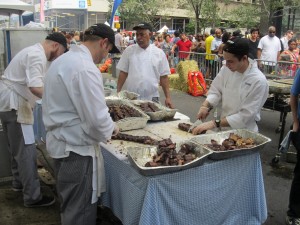 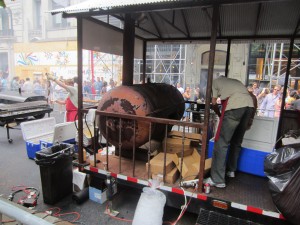 Madison Square Park is also home to the Shake Shack, which has some of the best Burgers in NYC, 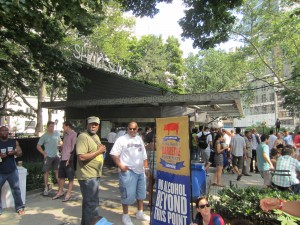 but we aren’t going to talk about those at all today.

The first thing I do when arriving at the Big Apple BBQ Block Party is grab the printed guide. The goal is to search out which new pitmasters and or food is available.  I also scratch off any NYC based BBQ spots because that’s available to me all year round. After a quick read through, my eyes spotted something I’ve never seen before on the menu; All Natural Whole Turkey BBQ. I LOVE BBQ Turkey and to make it well, you have to be an absolute master of the ‘Q. Turkey as a Meat can get dry, really, really quickly but I had faith in Ed Mitchell’s ability to do this one right. I was a little skeptical when I got my sandwich and noticed there was no BBQ sauce on it. One bite confirmed, this was an amazing Sandwich. The truth is, the Turkey did not need any Sauce at all. It was incredibly juicy and full of Turkey flavor. The spicing used was very light, as was the smoke. The taste was all natural, juicy, delicious Turkey, served on a squishy bun. It was a fantastic way to start my BBQ adventure. 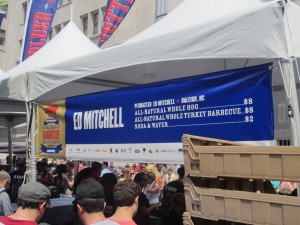 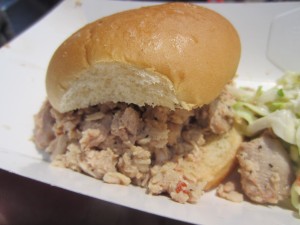 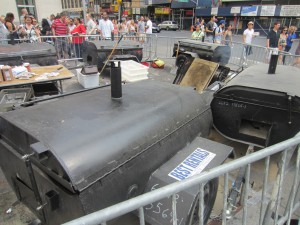 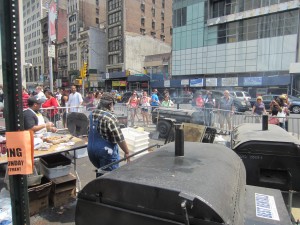 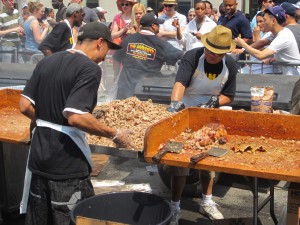 I was still starving and excited to eat more BBQ so I jumped in on the tent that had the shortest line. A few minutes later I had a giant tray St. Louis-Style Ribs. I nabbed a seat and popped open the lid to reveal some glistening Ribs smiling at me. The tender Meat must’ve hated being on the bone because it practically jumped into my mouth. One bite practically took off all the Meat. As is traditional with the style, the Tomato based sauce on these Ribs was sweet, a little acidic and sticky. The big difference here, St. Louis-Style Ribs are usually heavily sauced, bot not these ones. The application was very light, giving way to let the meat rule the palette . 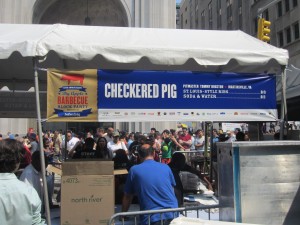 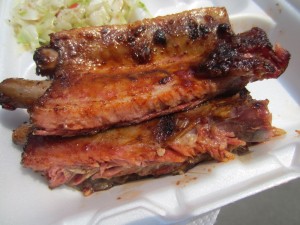 The line for Jim ‘N Nick’s Bar-B-Q at both the 2011 & 2012 Big Apple BBQ Block Parties was extremely long so I was surprised to see only a couple people waiting. People musta been outta their minds because their Sausage, made with 7 different seasonings and 3 different kinds of peppers is freaking awesome. Their stand at the Big Apple BBQ is easily one of the most visually appealing. They have large grate grills out in plain site where they are cooking dozens and dozens of them at a time. I’ve been quoted as saying the Big Apple BBQ Block Party is one of the best smelling weekends of the year and we can all thank Pitmaster Drew Robinson for pulling his weight. The Sausage is really juicy and has a great pepper spiciness that lingers on the mouth. Their Pimento Cheese gets my personal award for best side of the day. The big win today was taking a slice of Sausage and topping with both the Cheese & a Jalapeño on a Cracker. 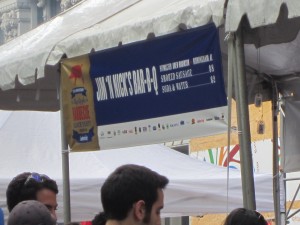 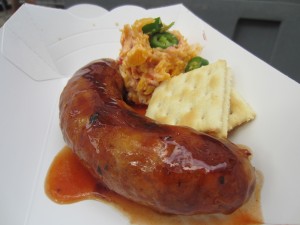 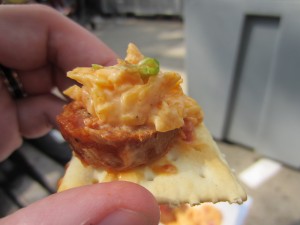 I was full and about to call it a day. That’s when a call, or a text in this case, came in from the sidelines. Josh Ozersky texted me and simply said “Go to Scotts!” I took a lap around the park and made my way over to the stand. Coming in from South Carolina, these guys have been in business for more than 30 years where they serve a Whole Hog that’s smoked for 12 hours before being served along with a side of skins. As I walked by the fleet of Bar-B-Que pits and saw the last of the Hogs being finished up, I instantly knew why Josh was making the suggestion. No sauce, just all natural Whole Hog smoked, pulled and served on a piece of thick White Toast. The Pork has a slight tang, that’s bery easy on the spice. Rodney Scott is clearly a fan of Hog and Smoke because those are the focal points of the dishes flavor. The Pork Cracklins were both crunchy and light and after a bite or two, they completely melted in your mouth. I was really glad I made room to eat it. 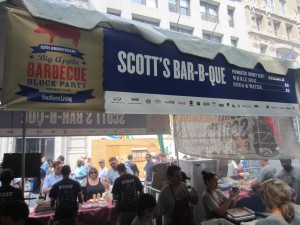 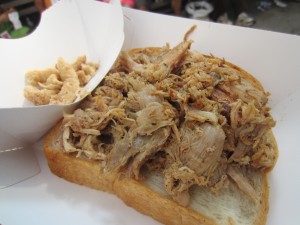 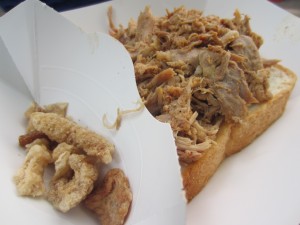 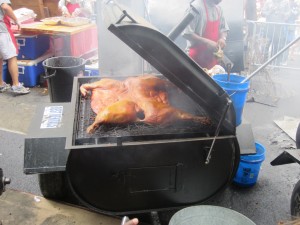 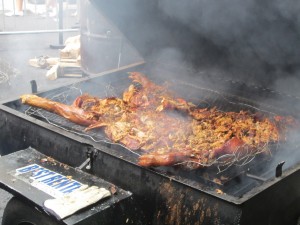 I’d like to send out a special thanks to Jee Won Park, Kristine Ku and the entire  Union Square Hospitality Group for not only putting on a great event but hooking up the media pass! Looking forward to a mouth watering 11th year in 2012.