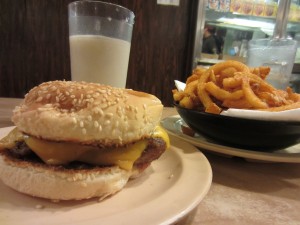 THE CONQUEST
Somebody get a Kickstarter campaign going while I cue Dr. Emmett Brown & Huey Lewis because I wanna build at time machine and go “Back In Time.” We’re not going to see Hendrix play Woodstock or see how the Dinosaur’s lived, nor are we going watch the Nina, Pinta or Santa Maria land at Plymouth Rock. Nope, we are going to eat a Hamburger. If you’re one of the many, many people who had a chance to eat at The Prime Burger in it’s nearly 5 decade run serving Burgers to people in New York City, you’ll surely fund the campaign.

In 1965, one of two flagship locations for a pre-war Burger chain named Hamburger Heaven, originally opened in 1938, changed it’s name to The Prime Burger and a legend was born. This luncheonette style diner has been serving New Yorkers and it’s visitors Breakfast, lunch and Dinner for 47 years. Only a few steps away from St. Patrick’s Cathedral, The Prime Burger has become known for one thing above all, their Hamburger. Diners had a choice of table seating for groups in the back or single seats at the counter or in a box seat in an area knowns as “the Track.” These forward facing seats, placed 6 to an alcove, have a swinging wooden arm that’s part tray, part personal table. The charm of the place is it’s long left behind style of fast casual dining that was good for business men on their Lunch break, families stopping in for a meal or a busy commuter fueling up before a day of work.  It’s the kind of Burger and restaurant that built this fantastic city.

Sadly, that time is over. 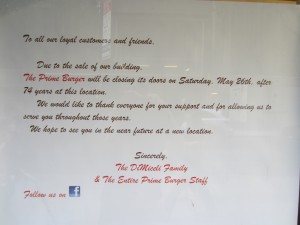 The owners of the building have recently sold the property and the new owners have no desire to keep this time honored Burger spot alive. The story is well documented via this post on Eater, as they interview several employees who have all worked their 20 years or more. While The Prime Burger gained most of it’s notoriety for its Food, specifically the Burger, it got their by promising speedy service from a friendly staff. You were guaranteed a great Burger as much as you were a friendly hello and a smile.

THE BURGER
With only 24 hours left on the clock, my buddies JD & Nick from The Wing-Off Crew, joined me on pilgrimage to pay our Burger loving respects. The Primer Burger patty, a  1/4 LB in size, was made from freshly ground lean Chuck. Served on a White Sesame Seed  Roll, topped with Lettuce & Tomato with the choice to add American Cheese and or Bacon. They also offered Chili, Pizza Sauce or Mushrooms but the most popular order was The Prime Burger Deluxe: 2 Juicy Prime Burgers, Golden Brown French Fries, and Assorted Relishes, Cheese optional. If you happened to be there before 11 am, you had the option for a BREAKFAST DELIGHT: Primeburger & Fried Egg on Hot Buttered Toast. As this was around 5 pm,  I went with a regular Prime Burger with only Cheese and a side of Curly Fries. Bonus for offering a New York Classic beverage, a Vanilla Egg Cream (Vanilla Syrup, Soda Water & Milk.)

The Prime Burger was a juicy, savory, Cheesy Burger that pleased the palette as much as it did the soul. It’s legacy will never be forgotten and should they be able to re-open in a new location someday, the Kickstarter fund will be used to buy you all a Burger. 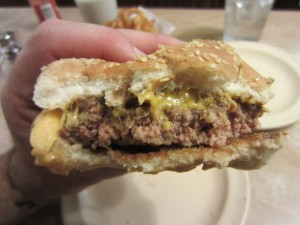 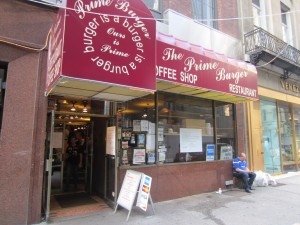 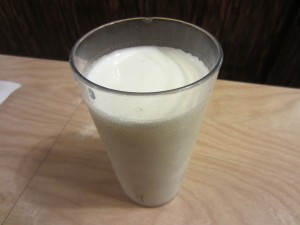 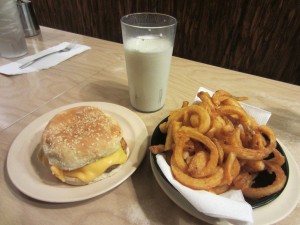 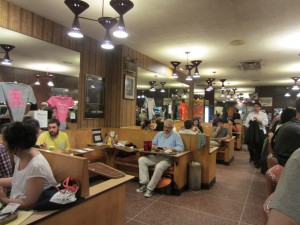 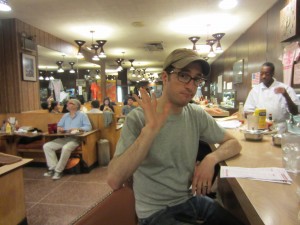 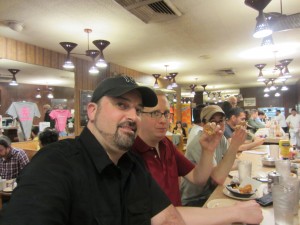