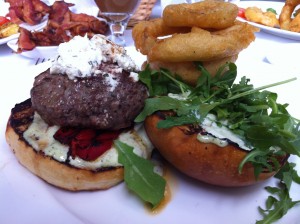 THE CONQUEST
Space in New York City is a commodity. None of us really have all that much and even the exorbitantly wealthy still have less of it than they could get elsewhere. That’s what happens when you put 1.6 million people on an island that’s only 22.7 square miles! While space in general is hard to come by, outdoor space is even harder to come by.  Now add to that a great view and great food and you’re talking something even more scarce. 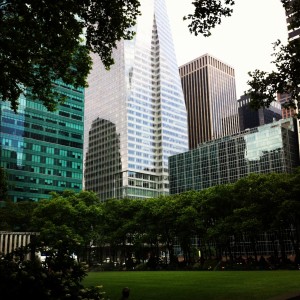 The carefully maintained 9.603 acres of land also houses one of the most popular restaurants in the city, The Bryant Park Grill. During the week around lunch time, you’ll find the city’s elite fueling up during a business meeting. There’s a robust after work crowd grabbing a happy hour drink before moving on with their evening or heading home, while at nights you’ll find more of a tourist crowd and on weekends, it’s the brunch crowd checking in for a tasty meal with a view. The place is always hoppin’ with the hungry and thirsty casual to business outdoor crowd.

THE BURGER
…Grilled Leg of Lamb Burger served with Herb Goat Cheese, fire roasted Peppers, Mint Aoli, Arugula, Tomatoes, on a toasted Brioche Bun with a side of crispy Onion Rings. It doesn’t come up that often and when it does, they only have a limited amount. When we arrived for brunch on this beautiful Sunday, there was already only 8 left. While I had a hankering for some Eggs Benny, how the hell could I say no to this Burger? I owe you the duty of eating it!

This Lamb Burger was NO. FREAKING. JOKE. From the sweet Brioche, to the savory Goat Cheese, to the bitter Arugula & the fired up Peppers, this Burger had so much going on let alone the robust Lamb meat. The patty itself was loosely packed, cooked rare plus (in between Rare & Medium Rare) and chock full of soft, savory roasted flavors. To be honest, while the Burger was incredibly delicious, it was just bigger than it needed to be, just a little too much of the toppings and just slightly undercooked. Having said all that, I’ve not had another Burger like it in the city and it was most certainly fantastic. My suggestion, split one with a friend and be sure to order a plate of Bacon on the side! 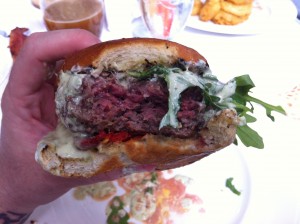 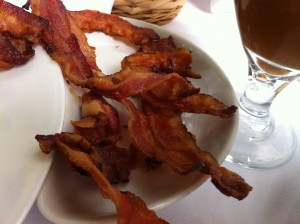 The Bryant Park Grill scores a 8 on The Rev Meter.