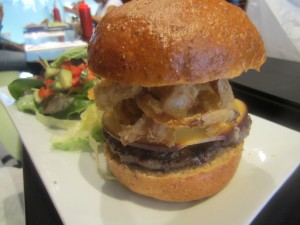 THE CONQUEST
Freedom of Choice is a very import Act that “declares that it is the policy of the United States that every woman has the fundamental right to choose to bear a child; terminate a pregnancy prior to fetal viability; or terminate a pregnancy after viability when necessary to protect her life or her health.” It’s also a very popular album from the band Devo which had their biggest hit, “Whip It.” Beyond that, Freedom of Choice is a concept on which America thrives, the ability to have as many choices as you could possibly imagine.

Freedom of Choice is a principal by which The Burger Bistro of Brooklyn operates. Their menu has so many choices of Appetizers, Proteins, Toppings, Cheeses, Rolls, Sauces, Sides and Desserts that it will make your stomach do flip flops. The Burger Bistro gives you so many choices in fact that unless you really know what you want, you could spend hours just dreaming up tasty combinations. It’s all priced to order so sit back in this small, modern looking establishment, grab a menu & a pencil and start to combinize (a word created specifically for this review) up yourself a Burger the most suits the choices that will make your day in the Burgerverse a happy one. Feeling a little intimidated? Check out the gallery of Burger Porn on their to get some ideas before your visit. Stop on in for lunch on a weekday and a Burger will only cost $10!

THE BURGER
I popped by Park Slope’s Burger Bistro for a quick lunch while working in Brooklyn one day. It wasn’t too busy so I was seated immediately and begun perusing my options on the menu. After much deliberation, I came up with the following combo:

I could’ve gotten way crazy and certainly have but figured I would rather try the Appetizer of Deep Fried Corn than just continue to stock pile on top of my Burger. Deep Fried Corn? Who doesn’t want to try that? Honestly though, you could deep fry a shoe and I would at least try a bite. Word of warning, it’s served UBER HOT. Be sure to let it cool before attacking with your chompers. The Corn has a nice Garlic-Salt seasoning that really plays out nicely against its natural sweetness. The Sauce, which was very tangy and good, was perhaps unnecessary. I liked it but would suggest it as a dipping Sauce for Fries or Onion Rings and instead just top the Corn with Butter or Olive Oil. It was great either way.

Kudos to The Burger Bistro as my Patty was spot on Medium Rare and brought a smile to my face. I took one bite and the first thing I thought; great call on the Frizzled Onions. It’s good to be a Burger-Genius. Not only did they taste great but they brought an awesome crunch into the middle of the Sandwich. But that’s not where my Burger construction know how ended. Oh yeah, there’s more.  The Smoked Gouda, oh man the Smoked Gouda was definitely the right call. As a Cheese, Gouda doesn’t really melt so it’s makes for interesting consistency that isn’t as melty as say a slice of American. What really made it work was the Smoky flavor of the Cheese! Moving down the Sandwich, the Patty was not only juicy but also very tender and loosely packed, allowing the Meat to practically melt in my mouth. Along with the all natural Beef taste, the Burger Bistro cooking process gave the Burger a little big of a smoked / char flavor. When paired up against the Cheese, it was a total win. It’s a really nice sized Burger and by example, after finishing it and the Corns, I couldn’t even attempt to eat my Greens. So much for digestive health!

If you’re looking for a Burger with lots of options or you never eat a Burger the same way twice, the Burger Bistro is the place to get tasty one the way you want it. They’ve even been known to have Donut & Kangaroo Burgers from time to time. 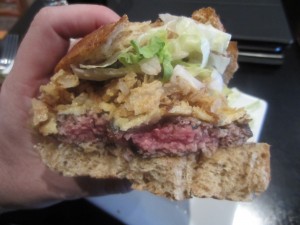 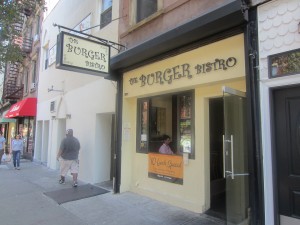 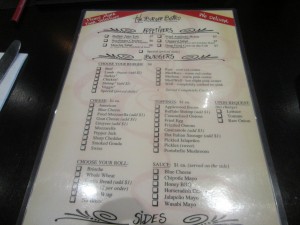 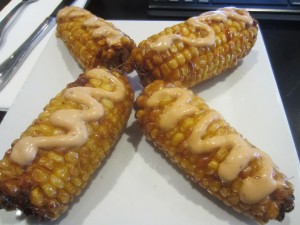 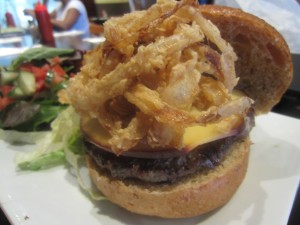 The Burger Bistro scores a 6 on The Rev Meter.