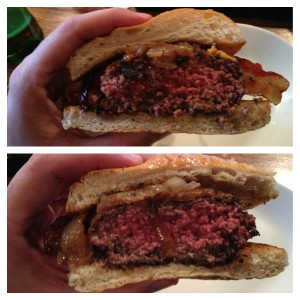 THE CONQUEST
You’re reading this site so I am going to make a bet that you live to eat, not eat to live & that every meal of your is the most important meal of the day. I’d also venture to say that eating is the most important part of your day and that some boring old meal with no flair is just not going to cut it. That being the case, you should check out Underground Eats. They put together and organize “alternative dining experiences” here in NYC. If you think of eating as an adventure, sign up immediate to be a member.

Recently I got an invite from my friend Mikaela at Underground Eats that read like this: “I wanted to let you know about a Burger panel that is happening on Dec. 2nd at The Luncheonette Mill Basin out in Brooklyn. The Chef there, Andrew Zurica claims to make an outstanding Burger and has reached out to us about doing a burger panel about making the best Burger. The idea is to put an end to the continuing argument between grilled, char broiled, or using a griddle top. He is doing a full-out taste testing with 10 judges on the panel and will prepare one of each kind of Burger. The wining choice will be what he continues using at the restaurant.” My reply was simply “Yes and please!!”

The Luncheonette in Mill Basin Brooklyn from the outside looks like any other local restaurant. You’re probably asking “where the heck is Mill Basin?” The answer: Mill Basin is in a part of Brooklyn that’s never heard of you either. There’s nothing really outstanding about The Luncheonette’s presence. That is until you see the tag line under the name; “Brooklyn’s Best Breakfast & Burger Joint.” If you’re going to put something like that on the side of your business you better have the goods to back it up and that is most definitely what Chef Andrew Zarica brings to the table.

After working for years in fancy and well known restaurants in Manhattan he decided to move back into his childhood neighborhood and open up The Luncheonette. The menu is simple and it’s all about fresh made, locally sourced, high quality products including fresh baked Buns. The decor is classy take on Fred Sanford’s back yard meets your Uncle’s Cabin up north. It defines unpretentious. It’s the kind of local dig that people rave about but it’s so far removed from the spotlight or public transportation that it is truly a locals only restaurant, until now.

THE BURGER
Once everyone was seated Andrew came out and explained that he loves Burgers and wants to offers his customers the best possible Burger experience available. Andrew uses an 80/20 mix of fresh Beef, ground daily by a local butcher and is left in the bag literally until you place your order. It’s handled as little as possible to keep the Patty loosely packed and then placed on, get this, either the char-grill or the flat top. Therein lies the question, which do you prefer? Andrew wanted to offer both because for some people, it;s about the temperature and if you must have a medium rare Burger, it’s a lot harder to do on a flat top which generally works to sear the outside of a Burger. But it was time to put an end to this. It was going to be one or the other and our panel of Burger experts were going to decide: Char-Grill vs. Flat Top.

Andrew brought out two Burgers with the same toppings without telling us which was which and it was up to us to pick our favorite. Each Burger was cooked as close to medium as possible and served with Bacon, Sauteed Onions & American Cheese. 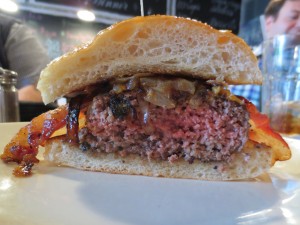 You could tell instantly that this Burger was well seasoned especially the fresh cracked Peppercorns. The Patty had a great sear & crunch on the outside but was incredibly juicy and savory on the inside. The middle was a nice red color and cooked exactly as promised. The Bacon, let me tell you was EXCEPTIONAL. Great crisp, great smoke, great flavor, this was no ordinary Bacon. The Burger was definitely Buttered as was the fantastic griddled Roll. The Onions were perfect. Cut into the same sizing for Onion Rings and then sautéed with the Beef. We were all pretty sure this was the flat top Burger but hard to tell because of the size of the Patty which was an Irish Pub style Burger. I was pretty blown away. 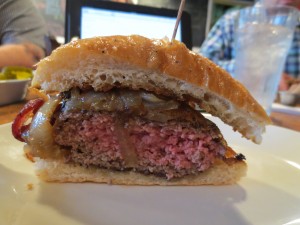 Honestly as good as the first but with two distinct differences, this was smokier and a little greasier. Now we were confused. Greasier & Juicier, this is a component of a flat top cooked Burger. But the smoky flavor, that’s definitely something you get on a char-grill. Had Andrew somehow duped us? Did he purposely try to make each Burger taste like what it wasn’t? No one knew but what we did know, we loved them both.

Andrew came out and asked for the vote. It was unanimous, Burger #1 was preferred.

How good was this Burger you ask? The flat top griddled Burger at The Luncheonette in Mill Basin in Brooklyn is so good that you should rent a car, boat, plane, helicopter horse & buggy or whatever other means of transportation you have access to and go eat it immediately. It is one of the best Burgers in New York. 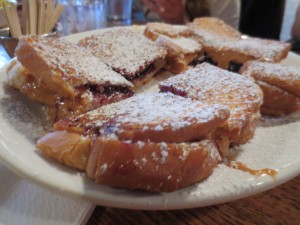 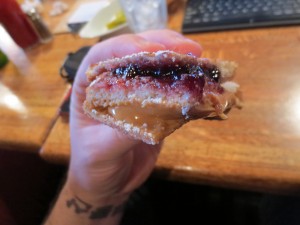 After the competition was over, Andrew fed us his grilled Peanut Butter & Jelly Sandwiches were … how do I sum this up as succinctly as possible? MUST EAT. 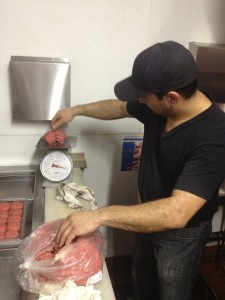 Once the meal was over Andrew invited us back into the kitchen to show us exactly how the Burgers were made. If these pictures don’t already have you making plans to go eat there, please go read another blog! 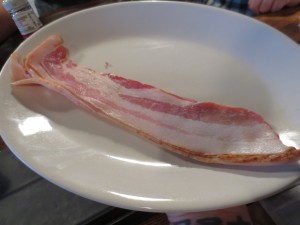 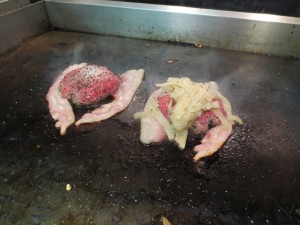 Thanks to Andrew, Underground Eats and everyone else who participated. This was AWESOME. I definitely suggest you read the post on Underground Eats, that is after you sign up to be a member! 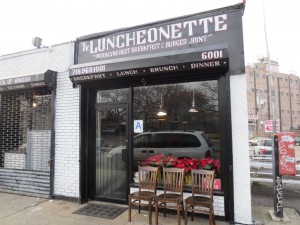 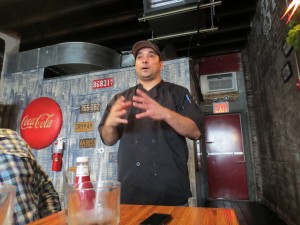 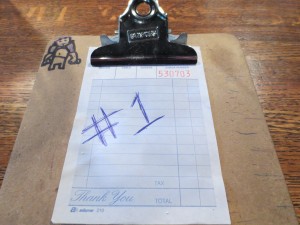 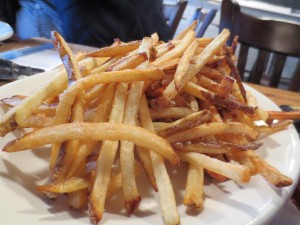 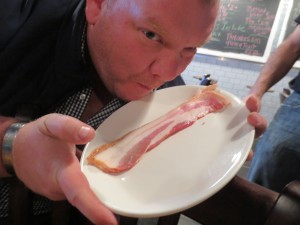 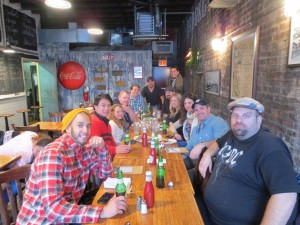 The Luncheonette scores a 4 on The Rev Meter.