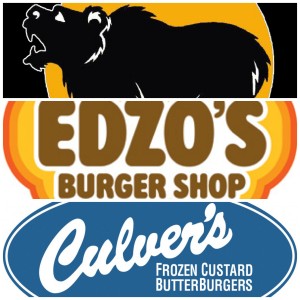 THE CONQUEST
Man, I love a road trip. What’s more the case, I love a Food road trip. There’s nothing like driving from great place to eat to great place to eat as a way to discover a place. Whether it’s single restaurant or regional chain, I just love to go eat like a local. Is the Food better than what I have access to in NYC, arguable. However, as a Food fanatic and a blogger, I like to think of myself of a taste collector. That way when someone asks me “where should I get a Burger when I am (insert geographical location,)” I have that answer. In other words, it’s my civic duty to eat Burgers everywhere I can!

On a recent 24 hour excursion into Chicago, I made a point to go and eat some of the best Burgers in Chicago. 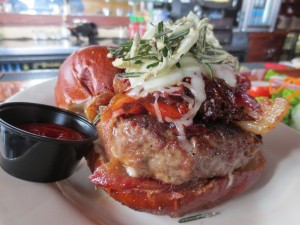 Kuma’s Corner is one of the greatest Hamburger restaurants on the entire Earth. I’ve not eaten every Burger on the planet, but I’ve had my fair share and I can honestly tell you that topping this experience has got to be an impossibility. Everything at Kuma’s is done to an extreme but without going overboard. All the Burgers are amazing, the Macaroni & Cheese is outstanding, the French Fries are fantastic, the rotating selection of draft & bottled craft Beer is excellent and they even have a rotating offering of Scotches, Bourbons & Whiskeys chilled on tap!

There isn’t really I can say about Kuma’s Corner, that I haven’t said before that wouldn’t simply be redundant. If you need more go ready my review of the Kuma’s Corner Black Oak Arkansas, one of the best Burgers on the planet, or the Black Sabbath Burger and their Iron Maiden Burger. On this trip in particular, I ordered the monthly special, the Christ Inversion. This Burger comes stuffed with Bacon and Gouda topped with Cherry Tomato Jam, Bacon, Gruyere and Frizzled Rosemary.

Did your brain just melt? The description alone should’ve made that happen. While there was a nice smoky-sweetness to the Tomato Jam, admittedly, I don’t love it. Gouda is one of my favorite Cheeses and I just didn’t fee l like there was enough inside. The Bacon, some of the best around, something Kuma’s NEVER disappoints on. Frizzled Rosemay – what is this? I had no idea before it showed up in front of me. I don’t think I ever want to eat a Burger again without this! IT WAS AMAZING. So good in fact, that I peeled off a small bit to eat by itself. 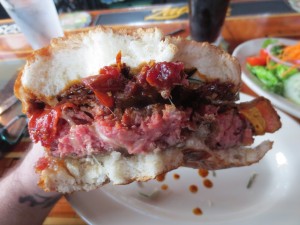 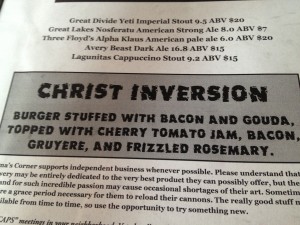 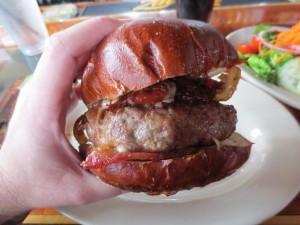 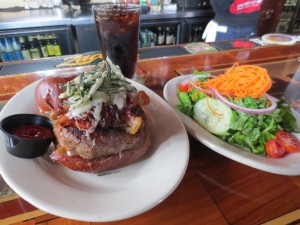 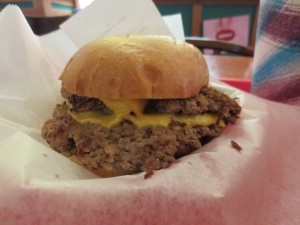 Edzo’s Burger Shop is one of those places that people have been telling me I need to eat forever and I see it on a lot “best Burgers in Chicago lists” so I needed to get this Burg into my slop gullet. It’s is located in Evanston, IL which is about 20-30 minutes drive from Downtown and while I would still call this “Chicago” a lot of people consider it the ‘burbs. In fact, I invited a bunch of friends to come join me and other than the fact that I was going at 10:30 am on a Tuesday morning, most people replied “I’m not going all the way to Evanston. Well, after eating there, my only reply is “foolish.”

Eddie Lakin has a proper culinary training background and has worked in fancy restaurant kitchens. When I said to him “only a person who is truly passionate about Hamburgers could create something like Edzo’s,” he insisted that wasn’t the case. He humbly explained that he just wanted to have a fast causal restaurant where the Food was done the right way. Then he went on to tell me that they grind all their own fresh Beef and how he wants to make sure every Burger served comes from one cow only. When I asked about his lean to fat ratio, he told me they eyeball an 80/20 mix which means that sometimes there’s a little more fat, sometimes a little more lean. Either way, it’s still house ground daily. You can have your choice of an 8 ounce char-grill patty or a 4 ounce version that they cook if you prefer yours on a flat top griddle. The Beef is all American USDA choice chuck and NEVER frozen.

Eddie also let me know that they only use fresh Potatoes from Idaho.  Their Fries are fresh cut, skin on and double cooked to ensure full flavor without being too greasy. You can order them 10 different ways with toppings like Cheese, Chili, Garlic, Beef Gravy, Sweet & Hot Peppers, Bacons, Onions and more. What about the Shakes? Oh, nothing special about them either. It’s just hand-dipped Vanilla Ice Cream blended with Milk and your choice of Oreo’s, fresh Bananas, Hot Fudge, Maple and more. If you read on his website they tell you it’s all made in “an old-fashioned Multimixer spindle machine. These old machines blend more slowly than modern blenders, which yields a smoother, creamier finished product, due to less air being whipped in.”

So when Eddie tells me he doesn’t have a profound love of Burgers, he’s either lying to me, himself and the droves of loyal customers who frequent Edzo’s.

I ordered a double 4 ounce, flat-top griddled Burger, because flat-top is the best way to server a tasty Burger.  The Burgers usually come topped with Pickles, Onions, Ketchup, Mustard and your choice of Cheese. I find Pickles gross and Ketchup on anything but French Fries should be considered a Food sin so I ordered American Cheese & grilled Onions only. A few moments later the double Burger arrived. The first thing I noticed was a perfect Bun to Beef ratio with a White Squishy Bun. I bit in and it was everything it’s been cracked up to be. Tasty, fresh, delicious, savory, well seasoned, juicy, succulent, perfectly cooked and just about any other adjetive you would ever use to describe an awesome Burger.

The French Fries, pretty darn great too. They taste of all natural Potato, not Grease. I definitely suggest you get the garlic topping when you visit. Unlike most places who just overload their French Fries with Garlic, this is about a subtle layering that still let’s you taste the crispy golden delicious Fries but elevates the dish overall. While I’m not much for Sweets, I was told that not ordering one is a waste of a trip. If you’re game for it, take the advice I was given and get the Speculoos Shake. Speculoos is a Shortbread Biscuit that’s Dutch in nature. It tastes of Cinnamon, Nutmeg and Ginger and when added to a Vanilla Milk Shake it comes across like a sugary Biscotti.

If you’re gong to do something, do it right and if that means eating a Burger, eat it at Edzo’s Burger Shop. 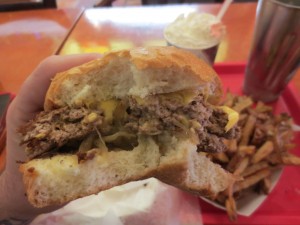 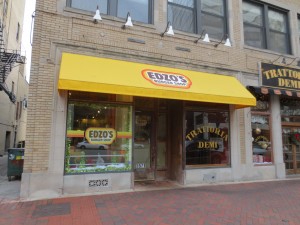 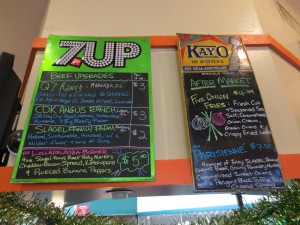 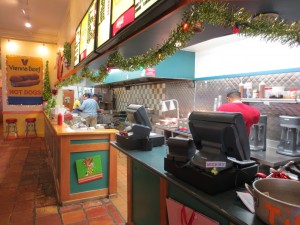 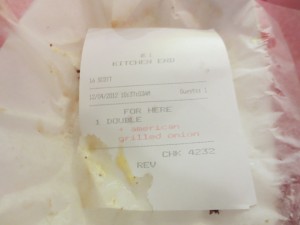 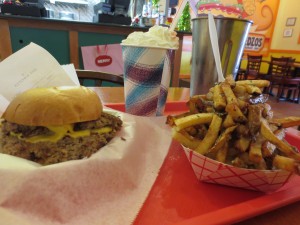 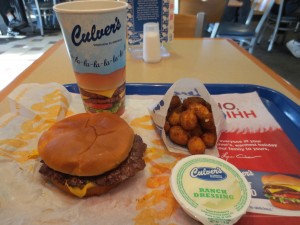 Combing their love of Food, Cooking and feeding people, George & Ruth Culver opened a family restaurant in 1961. More than 2 decades later in 1984, they teamed up with their son Craig and his wife Lea to open the first Culver’s location. If you live in the Midwest and love Burgers, you’re already familiar with this quick service chain. Their know for a signature combination of ButterBurgers and Custard. The ButterBurger recipe is exactly how Ruth used to make them using fresh, never frozen, 100% locally sourced Beef. It’s seared on a flat top griddle and then served on a buttered and toasted White Squishy Bun. If you’ve never had one, you most certainly need to.

It’s a staple of Midwestern’s Burger fanatic’s diet. Culver’s is living, breathing proof that you can serve delicious, fresh, local Food at an affordable price and as a scalable business. While you’re there do NOT miss out on one of the best side items in the history of Hamburgers, Wisconsin Cheese Curds. Cheese Curds are the bits of solid Milk used to make Cheese. They’re often described as being “squeaky” but as any Cheese Curd fan knows, they’re also described as “awesome.” Once you bite into a Culver’s deep fried Cheese Curd, you’ll swear off Mozzarella Sticks for the rest of your life. While you’re there be sure to wash down your meal with a Culver’s Root Beer, the absolute exactly right flavor of Soda to eat with a Burger. 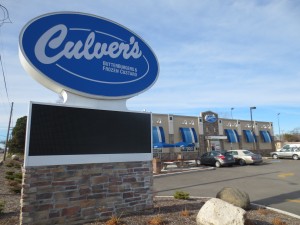 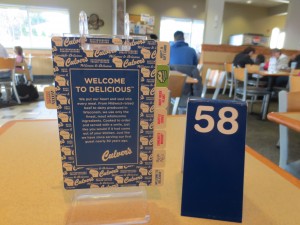 From Culver’s, I had to head straight to the airport as I was in jeopardy of missing my flight. It should be said though, that although I didn’t go on this trip, no list of “Best Burgers In Chicago” is complete with out Top Notch Beefburgers. A restaurant doesn’t stay open for more than 70 years if they aren’t doing it right. Not only is Top Notch Beefburger doing it right, they’re doing ALL OF IT right. Go eat this. Do not pass go. Do not collect $200. Say hello to the picture of me on the wall. 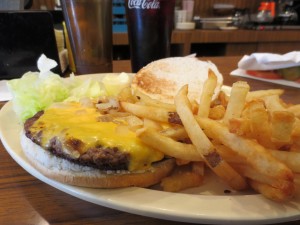 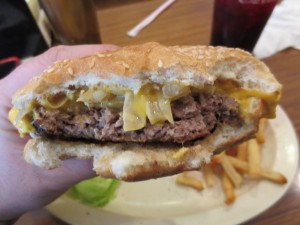